Nerdette’s Newsstand Plans Return After Being Doxed And Receiving Threats

Tristan from Nerdette’s NewsStand had recently taken sabbatical from social media and YouTube after making a video critical of the cult of Zoe Quinn and the companies that keep enabling that cult to exist, such as DC Comics, who rehired Quinn to work on the Infected: Deathbringer #1 comic featuring a crossover with Batman and Superman. The criticisms aimed at Quinn, however, cost Tristan in the form of being targeted for threats and being doxed.

Well, she returned with another video to explain why. It’s only three minutes long and you can view it below, which was posted on the Nerdette’s NewsStand channel.

The scare came from when someone messaged her on Twitter following her rant on DC Comics and Zoe Quinn, basically threatening her to stop making content.

Tristan shared a partial image of the person’s message, which you can view below. 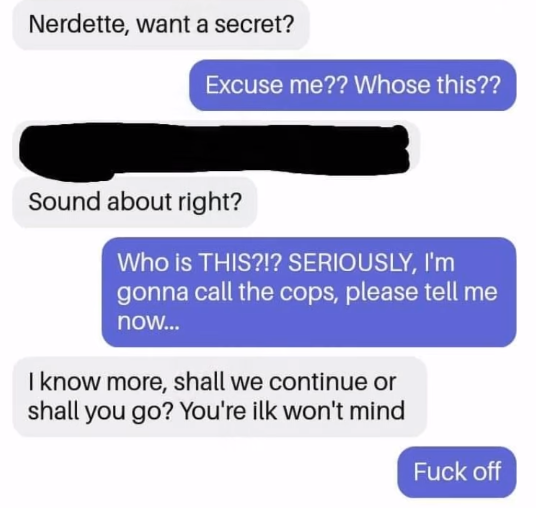 In the video she briefly discusses what else occurred and how they went after her family, with on-screen text that read…

“That’s just the beginning. They had… HAVE everything. Family members, work information, home address, past lives. They targeted people in my life… young and old.

“So I hid. I was scared. Terrified. They got what they wanted.

“But not anymore. I’m done hiding. I’m done being scared.

“It wasn’t hard to retrace my steps. I know who she is. You don’t scare me anymore.

“I’m coming back with extreme precautions.

”I’ve always lived for everyone else. This channel… I did for me.

“It’s not fair, so I am moving forward. Trying to.

“I’m coming back next week. To YouTube… that is.

“I’m also disabling comments and streaming for a few months.

We saw these kind of tactics exercised frequently during the height of #GamerGate. Various groups used doxing to force supporters of #GamerGate out of the fight, threatening their livelihood and children.

We’re seeing these kind of tactics (re-)escalate as the Regressives vie to take control of politics in 2020. On the smaller scale there are threats, doxing, and intimidating being applied to content creators, bloggers, and information signal boosters. On the upper scale of the hierarchy we have big tech shutting down discussion, websites, video channels, and social media personalities in order to stifle speech and control the message.

YouTube has either banned, terminated, or demonetized most opposition voices on the platform, while Twitter has suspended or shadow-banned countless users. Everywhere you turn there’s censorship running rampant. But if you aren’t being censored then you’re being intimidated or bullied offline by the cancel culture cultists, all in an attempt to maintain the authoritarian’s status quota.