Mass Creation Games is working on a new 2.5D beat-’em-up called Shing!. The upcoming game received a new 15 minute gameplay demo highlighting a vertical slice of what’s to come. If all goes as planned, you can expect to get your hands on a digital release of Shing! starting in 2020 for the Nintendo Switch, the PS4, the Xbox One and on Steam for PC.

The game takes place in East Asia where four heroes join forces to fight against a demon invasion using their slick ninjitsu skills. You’ll be able to join up with three other friends in either local or online co-op play, bringing the classic coin-up beat-’em-up experience back to life for today’s generation of gamer.

The 15 minute gameplay demo can be viewed below, featuring plenty of combos, special moves, a look at the enemies, and some of the stages.

In single player mode you play as one of the four playable characters. You can also switch between the characters using the directional pad when you’re playing in single-player mode.

You can taunt enemies, block and counter attacks, perform neutral combos, air juggles, and even special attacks and kill moves.

The game features solid character animations for both the player characters and the enemies. It’s not spectacular but everything looks serviceable.

The most impressive thing about Shing! is that the developers duly appreciate the female form. There are two male and two female characters. The female characters are dressed in some eye-catching attire, including pelvis curtains and boob jiggle. Beneath the loin cloths the chicks are wearing thongs, so every time they kick and jump or fall down, you’re treated to a great view of the moon. 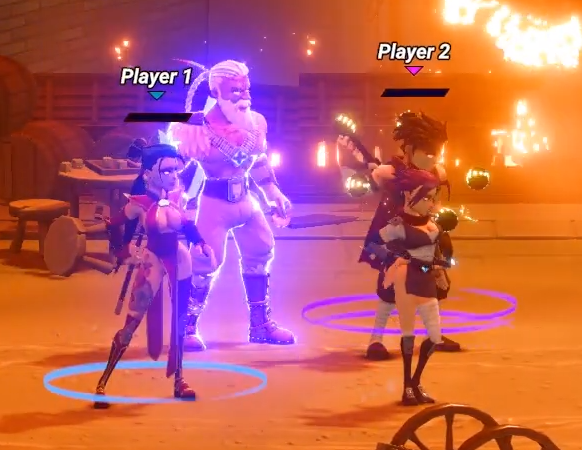 Basically, there is a lot of fan-service on display and it’s designed to appeal to people who actually buy games and enjoy seeing beautiful women kicking butt and displaying skin.

I don’t know how well the character designs will work out with Sony’s censorship policies, but let’s hope that Mass Creation isn’t forced to censor the game to accommodate the prudes at SIE.

As far as the gameplay is concerned, it’s no walk in the park. You will have to rely on dodging, blocking, and countering… a lot!

Timing is key here and this is a beat-’em-up game that requires skill, unlike so many other games out there designed for casual audiences.

One neat aspect of the gameplay is that in one or two player mode, when the lives of certain characters are low you can swap them out and give them a break. While they rest their lives will slowly recharge, not unlike the tag-mode in certain fighting games.

Shing! really took me by surprise and shows a heck o f a lot of promise. The bloom in certain areas was a little high and the music could use just a little more oomph and impact, and the backgrounds could use a little more activity, but otherwise the game looks good.

You can learn more about Shing! by visiting the Steam page.