Apple has come under fire after the revelation has emerged that the company is sending user data to Tencent, as reported by Reclaim The Net. Tencent is a safe browsing provider that is part of the Fraudulent Website Warning feature. What this entails is that the company hosts servers containing the data of users and malicious website addresses that is built around data provided to them by Apple. This information is then used to warn users who are about to browse a site known for malicious activities that could threaten the safety of their devices. 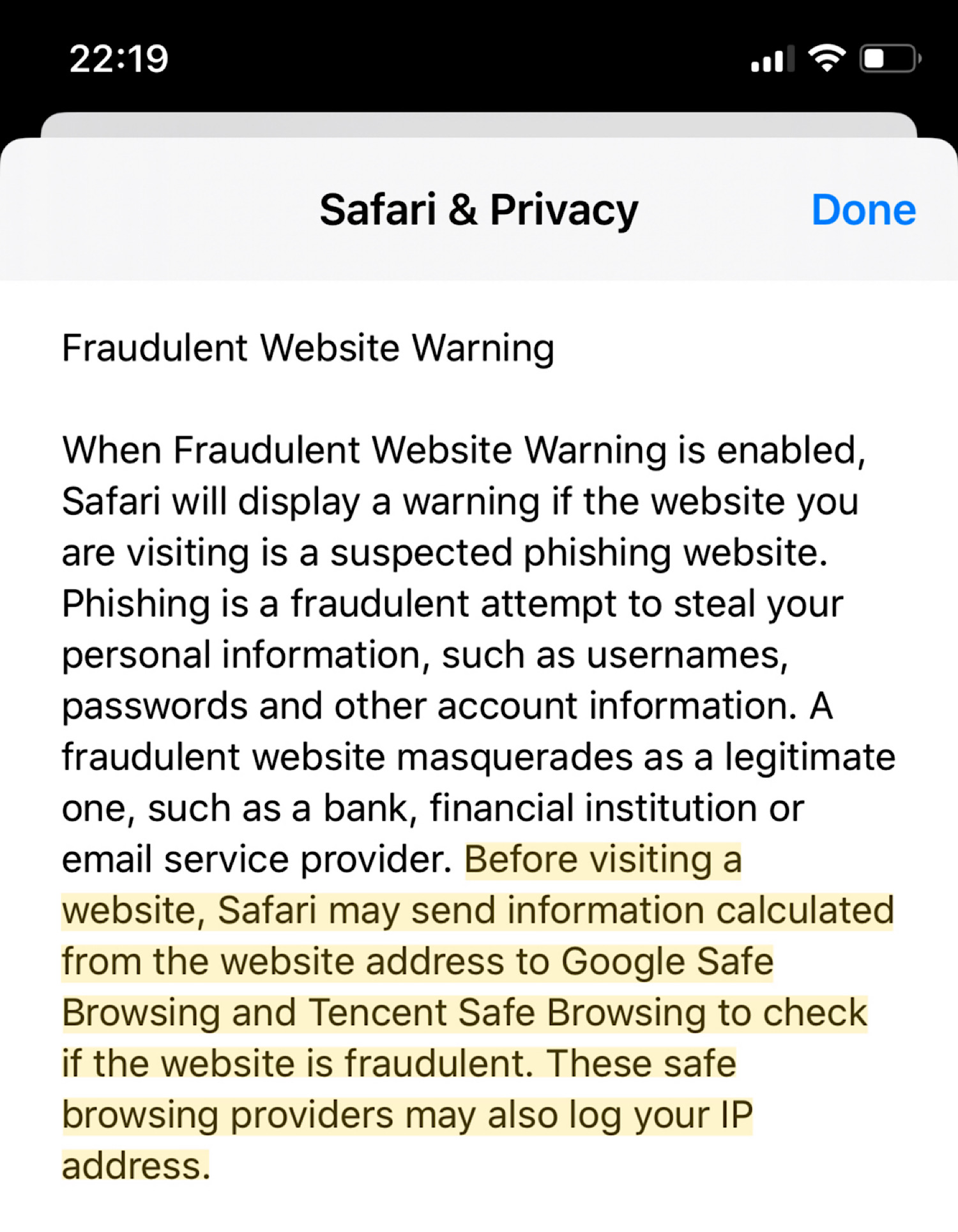 Initially this system was developed by Google , as noted by Crytography Engineering, and operated through observing which sites users visited conducted malicious activity and reporting it back to Google along with user data. This data would include IP addresses, browsing history, and other data on the user and was supplemented by occasionally planting cookies in the browser. Google would subsequently come under fire for the massive privacy violation this created and changed their privacy system to obscure the user’s IP address. This is the system Apple utilizes today as part of the program.

The major problem with the method used to protect user data is it only works if you browse a single website, as detailed in the technical document outlining how it functions. Each website you visit provides another piece of the puzzle for your data. After an unknown amount of websites it is possible to piece all the bits of data together to determine your full IP address. This of course does not take into consideration the issues involving your other data being handed over or cookies being placed in your browser. Though the data is partially anonymous, it isn’t hard to figure out who you potentially are after you’ve logged into your email account or other personalize platforms that are recorded in your user data records at record Silicon Valley and other Big Data companies have.

Needless to say, even Google has caught flak for how it provides very little in the way of actual user privacy. With the crux of user privacy protection resting on a “we could do this, but we’re not” argument, with the only proof provided being “trust us.”Coming from a company comprised of some of the most untrustworthy people on the planet that proof rests on plausible deniability that would require a whistle-blower to come forward to undermine.

What information and in what form the information provided to Tencent is unknown. Apple has issued a statement in regards to this issue, but it does not address any of the aforementioned concerns, and upon breakdown as you will see is empty corporate speak.

“Apple protects user privacy and safeguards your data with Safari Fraudulent Website Warning, a security feature that flags websites known to be malicious in nature. When the feature is enabled, Safari checks the website URL against lists of known websites and displays a warning if the URL the user is visiting is suspected of fraudulent conduct like phishing. To accomplish this task, Safari receives a list of websites known to be malicious from Google, and for devices with their region code set to mainland China, it receives a list from Tencent. The actual URL of website you visit is never shared with a safe browsing provider and the feature can be turned off.”

Breaking this down we can already see there is fraudulent information. Data is not protected by the Fraudulent Website Warning system. The system in question prevents you from being hit with viruses, malware, phishing, and hijack attacks from known sources. To do this the company collects and compiles data on the sites and you in order to be able to determine if something is safe or not.

When they say “when the feature is enabled” they are presenting the illusion that this only occurs purely by the user’s choice. Despite what data is collected, in what form it is sent, and who has access to this data being unknown thus preventing any informed decision from being made. There is the careful omission that the feature is on by default and with the potential of cookies there is potentially no means to prevent it from occurring even if disabled.

Their description of the program is an obfuscation of the issue. No one is uncertain of how the feature functions. At least to the point where it supplants the main issue of contention: user data. By providing a description of what is not the issue their intention is to convince people passively that this was the issue being discussed. Else why would the company comment on a tangential matter rather than addressing the core issue?

As you can see Apple’s response is corporate speak amounting to nothing of substance in regards to the core issue. A placation aimed at the stupid and illiterate that ultimately says nothing directly, but speaks volumes in its unwillingness to address the core issue of contention. Remember never let companies get away with narrative shifting no matter how minor.

Apple’s claim they protect user privacy is equally absurd. Since 2018 their Icloud servers have been located in China and thus subject to Chinese government oversight, regulations, and law. It is overseen by a state owned Guizhou-Cloud Big Data (GCBD) who has access to Apples networks, code, and protocols. Even if the company’s reach inside the data network is limited they know how the network functions and will pass that information onto the Chinese regime’s hackers.

If you believe Apple cares at all for its users look at their past actions. This is a company who will slow older model phones  to force it’s consumers to buy the latest models, as reported by CNBC. As a company it has regularly fought the right to repair movement in court despite routine losses with each subsequent lawsuit around the world holding up users’ right to repair their devices . Yes this is a company that does not believe you have the right to fix your devices if they break, but must instead go out and buy a brand new phone instead of paying comparably minor repair fee. This of course happens while the world is running into a shortage of available raw materials  to make parts of the phone, as reported by the New Yorker. Apple doesn’t even care about the environmental activism they and many of their most loyal customers happily champion.

Apple did not care about the protestors in Hong Kong — many of them Apple users — when they removed HKmap Life app from their stores. This application was used by protestors to be able to determine which areas were designated by the police as unsafe, so both protestors and those not involved could avoid them. The will of the Chinese government was more important to Apple than the physical safety of their users, both protestor and civilian.

This is not an isolated incident. Apple has routinely demonstrated complicity with the Chinese Government. A brief examination will show in 2019 they removed the Taiwanese Flag Emoji as reported by Quartz, but had no issue promoting LGBT emojis. Of course this was only in the West, as the Chinese government does not approve of the LGBT movement or anyone promoting it in China.

Exploits in the Iphone software  allowed Chinese state sponsored hackers to target the Uighur Muslim Community. Apple would go on to ignore the involvement of the Chinese Government focusing on Google for the audacity of exposing their occurrence. For those less sympathetic to the Uighur Muslim Community remember this isn’t an issue that solely effects them and one that doesn’t have the potential to effect you in the future.

Concluding our less than exhaustive look at Apple, let’s highlight that this is a company that denied their employees lunch breaks. Any idea that Apple has any consideration for its users let alone human life should be considered laughable even after the briefest examinations. Volumes of books could be written on all the skulduggery Apple has committed against its users, founder, and to the detriment of society, but after this brief examination it is clear the idea that Apple cares about human life in general is absolutely absurd. The Chinese government whom Apple increasingly bends the knee to, has more concern for human life.

By the day, we are increasingly learning just how far corporate America has sold out the United States. Not just purely economically, but strategically and philosophically, all while recognizing Chinese authority as superseding American authority and law. This did not come under the cover of darkness in backrooms across the world, but appeared in broad daylight with a sense of impunity. Apple had no qualms disclosing it to the world because they know they will face no consequences. They will see no mass exodus of consumers addicted to the status symbols they put out. No prison time or consequences for their executives protected under corporate liability laws.

True to form there is no massive outrage over this. Most will not appreciate what it means for China to have information on you, or your family. Hong Kong is aware of the influence the Chinese assert and how easily you can just disappear in the middle of the night. That’s not even hyperbole out of a spy novel, that is the reality of living next to a superpower that has concentration camps where labor is exploited and who openly harvests organs from prisoners, as reported by PanamPost.

Yes they will not come for you in the night, most people are not worth the effort and problems to eliminate, but gradually you’ll watch your freedom rescind. Already many companies are forbidding talk of the Hong Kong protest. Perhaps it won’t be today or even soon that this will involve the average person, but how long till this corporate censorship spreads to something you care about? Either we stop it now or try to stop it at the gate when it is vastly too late.