“Rules for thee, not for me” is the way the typical entitled postmodernist thinks. They create this massive, interweaving web of contradictory principles and rules for people to follow all while ignoring the rules and doing their own thing whenever they feel like it. A good example of this philosophy in action is when comic book writer Christopher Sebala — who has pronouns in his Twitter profile — recently attempted to sell modified badges based on 2000 AD’s Judge Dredd series. He was called out for copyright infringement by the parent company, and then the typical outrage brigade came to Sebela’s defense for selling copyrighted material for money.

Twitter user DataRacer basically summed up the entire situation in a series of tweets if you’re not willing to jump down the long, winding, brain-depleting rabbit hole of insanity.

2000AD Comics politely asked him to stop & SJW’s freaked out:

For those who don’t mind taking a ride down the twisting pathway that leads toward the Social Justice madhouse, it all started on September 25th, 2019 when Christopher Sebela – possibly known for the comics House Amok, Holy Terror, Shanhai Red and Crowded – informed his 11,000 followers that he was taking orders for custom badges based on 2000 AD’s comic book series.

This resulted in 2000 AD responding to Sebela via Twitter on September 30th, 2019 to address the situation and request Sebela to contact them about copyright infringement. 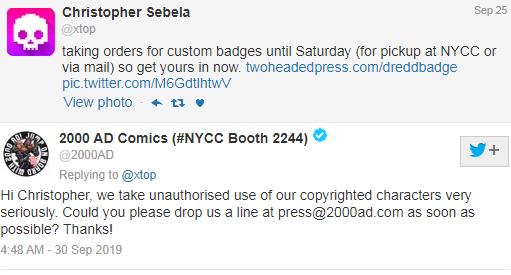 Sebela deleted the tweet that 2000 AD Comics responded to, but there’s still a tweet up from September 27th, 2019 where he mentions the orders for the Judge Dredd badges.

knocking out overnight Dredd badge orders, if you sent one in, I’ll be in touch today with mockups and more information

Since Sebela is in the circle of SocJus, it didn’t take long for the typical group to circle the tweet like vultures around rotting meat in a torrid desert.

Later that day there were members of SocJus who were condemning 2000 AD for politely reaching out to Sebela in order to protect their intellectual property.

This began to snowball and build like a disgustingly enlarged snot bubble in the nose of nasally kid who dozed off during story time in kindergarten right before lunch break.

The typical Social Justice crowd attempted to turn it into an Oppression Olympics event to paint Sebela as a victim of some kind of copyright injustice.

Wow, 2000AD suck ass.
…..unless they actually have a Judge Queer that’s similar to Death…. https://t.co/UTKTrj7G6k

Artist: I’ll be making a handful of LGBT+ friendly queer Judge badges for friends, who wants–

Sebala, despite receiving some support from the far corners of the lightless cave of Leftism, decided to delete the tweet and the order page on his website.

If you visit the link to the Dredd Badge page on his WordPress site, it now has the following message.

While the SocJus crew ran to Sebela’s defense for his “parody” badges based on Judge Dredd, it’s funny how they had the complete opposite reaction to artist Steven Wayne, who made a logo for the Fandom Menace that was similar to another Star Wars charity logo, which caught the ire of the exact same people who defended Sebela.

If interested, ask @StevenWayneArt about how these same SJW’s accused him of “stealing someone’s IP” that he was using in a parody logo for his own Twitter profile.

They bullied Steven for 3 days about it. Oh the irony. pic.twitter.com/bTkuUV9clv

As pointed out by Steven Wayne, the hypocrisy is quite apparent.

Yes indeed. The hypocrisy is beyond belief.

As stated at the top of the article, when it comes to the Social Justice crowd their ethos is quite simple: “Rules for thee, not for me”.