The Rainbow Reich took aim at the developer of the RPG Maker game, Heartbeat. Why? Because the developer’s girlfriend ranted against the current wave of propaganda that’s been used to prop up the trans movement. The multi-colored flag fascists labeled the developer and their girlfriend as “TERFs”, called them and the game “transphobic”, and tried to review-bomb Heartbeat on Steam but failed miserably. Well, the developer decided to pushback with a cheeky 41% off bundle deal, and now the alphabet soup brigade on ResetEra are seething.

You can purchase Chumbosoft’s Heartbeat individually for 35% off the normal price. However, if you choose to get the game in a bundle pack with the soundtrack included, it’s 41% off on the Steam store for $12.86.

So why is 41% such a big deal and why did it make ResetEra rage? Because, according to ResetEra, the developers are supposedly openly mocking trans people. You see, 41% is also the attempted suicide rate for transgenders, according to a survey fact sheet by the National Center For Transgender Equality and the Trans People of Color Coalition, as reported by TaskForce.org.

Over on the ResetEra forum, they explain why the 41% discount is a “dogwhistle”, and berate the developer for the discount.

“You don’t randomly put your game on sale for exactly 41% off. Fuckers are now openly mocking Trans suicide. This honestly needs its own thread. Report their shitty game to Steam.”

As is typical from that crowd, it went from seething rage to justifying cancel culture and deplatforming.

Nevertheless, ResetEra’s resident recipients of warranted rage continued to harp on the game and its developers, as well as any gamers who supported the title, regardless of what the developer’s actual intentions were.

What’s funny is that the discount for the bundle changes depending on the region, so some people are scratching their heads as to why ResetEra is so bent out of shape about the matter, because it’s not always 41% in every region.

For instance, in certain European regions the bundle shows 42% instead of 41%, not that it makes that much of a difference. But it definitely puts a spike in ResetEra’s reasons for getting outraged.

Either way, ResetEra’s antics were further broadcast to the wider public thanks to YouTuber TheQuartering, who outlined how the hate forum was trying to deplatform the little indie game.

Hilariously enough, ResetEra’s outrage has actually helped bolster the game’s appearance on the marketplace, and in addition to the deep discount and support the developers have been receiving from the Twitter tantrum brigade, Heartbeat has actually seen a bump up in its sales.

According to the Steam Charts the concurrent players spiked after the controversy got underway.

The game also managed to make it onto Steam’s top seller list, which I’m sure is making the ResetEra types glower with immeasurable amounts of disgust. 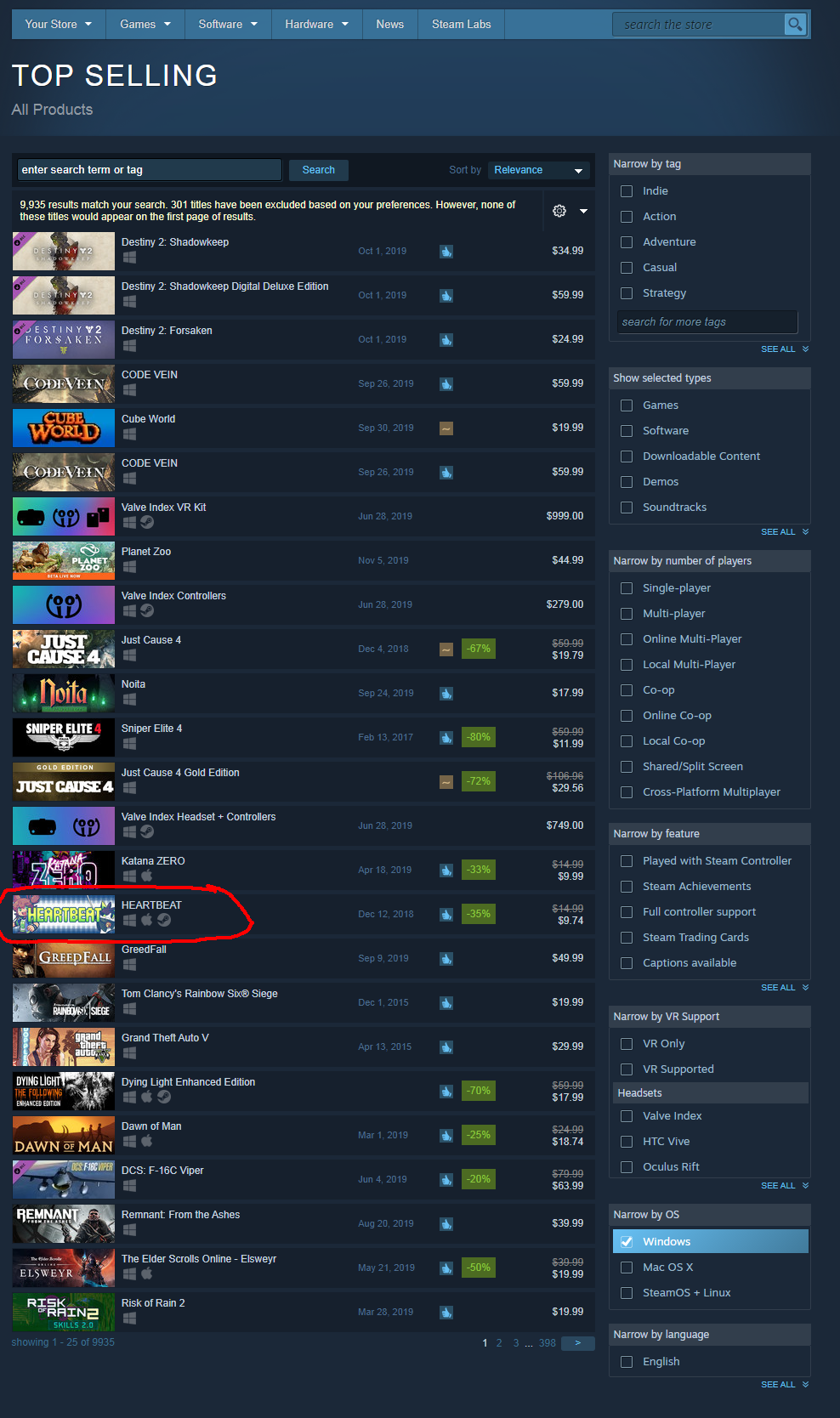 In the end, it looks like gamers with a capital ‘G’ are the ones who come out on top, putting the sociopolitical activists in their place and championing developers who openly speak their mind, which has become a sad rarity in today’s politically correct society.

(Thanks for the news tip Ribonizer)