Disclaimer: This is an allegation that has not been substantiated nor repudiated.

Kotaku has not done much to benefit their reputation as of late. It seems weekly the website is embroidered in one controversial interaction or another with either the gaming community or industry. When not involving themselves in one controversial topic or another, the site routinely pushes a social justice or progressive narrative that simply isn’t clicking with their target audience. Unsurprisingly, the result of their behavior is a staggering 778 website ranking drop on Alexa over the last 90 days. 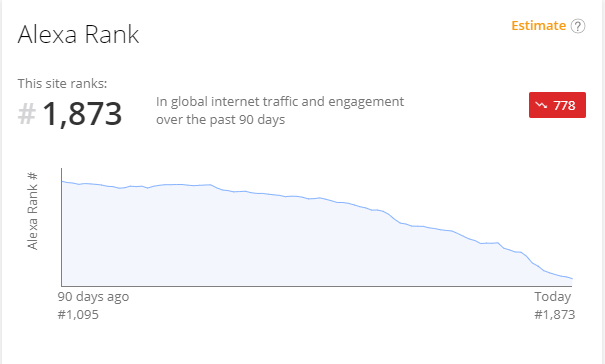 When your site is bleeding views that’s when competent management takes a step back to reexamine the mission statement and content being produced. To find a better way of interacting with their target market and what their target audience wants. Gizmodo – the parent company of Kotaku – has apparently concocted other designs where in they will charge for quotes. Coming from the developer of I Love You , Colonel Sanders! Alexei, we have learned the company is propositioning $1500 for a comprehensive quoting package. The tweet was made by Alexei on October 4th, 2019, but was quickly deleted after gaining a lot of widespread attention. 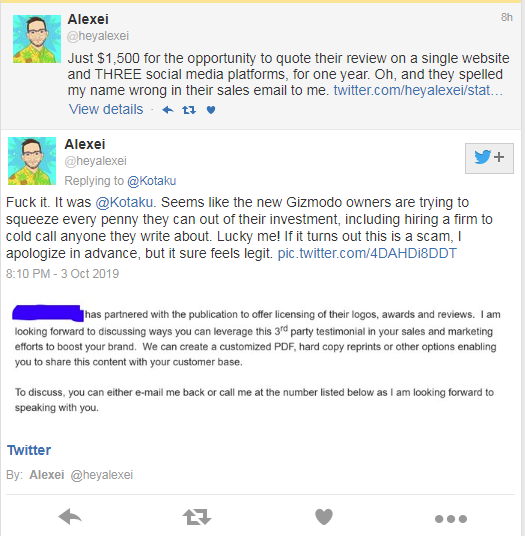 “Just $1,500 for the opportunity to quote their review on a single website and THREE social media platforms, for one year. Oh, and they spelled my name wrong in their sles email to me.”

“Fuck it. It was @Kotaku. Seems like the new Gizmodo owners are trying to squeeze every penny they can out of their investment, including hiring a firm to cold call anyone they write about. Lucky me! If it turns out this is a scam, I apologize in advance but it sure feels legit.

Alexei in his now deleted tweets goes on to describe how the offer was for a game that Kotaku had in fact given a negative review. Along with how he does not believe the writers at the site are aware of what is going on, and that it is merely management’s poor decision. His statements would go on to generate enough heat to force him to “bleach” his account.

The controversy was big enough to capture the attention of YouTuber YellowFlash, who recounted the events.

Given the sordid reputation Kotaku has built around themselves amongst a huge chunk of the gaming community quoting their hatred would be a very viable marketing move in the right circles. Though it is unlikely whoever is mass calling people had outrage marketing in mind when propositioning the developer for the quote.

Some of the other gaming outlets within the industry also chimed in on the matter, with Niche Gamer owner, Brando Orselli, mentioning that they’ve heard similar rumors about larger sites charging for coverage, but at Niche Gamer they review the games for free.

Sad thing is a lot of them do. I’ve had devs tell me privately they paid major websites for coverage, otherwise said websites would never cover their game. We don’t do that on Niche Gamer. We covered KFC dating sim for freeee, like all coverage we do 👌 https://t.co/0jr46cPkmE

This kiss and tell controversy is mostly being discussed by gamers and YouTubers. If you type in “Kotaku $1500” there doesn’t appear to be any stories about it on Google News. 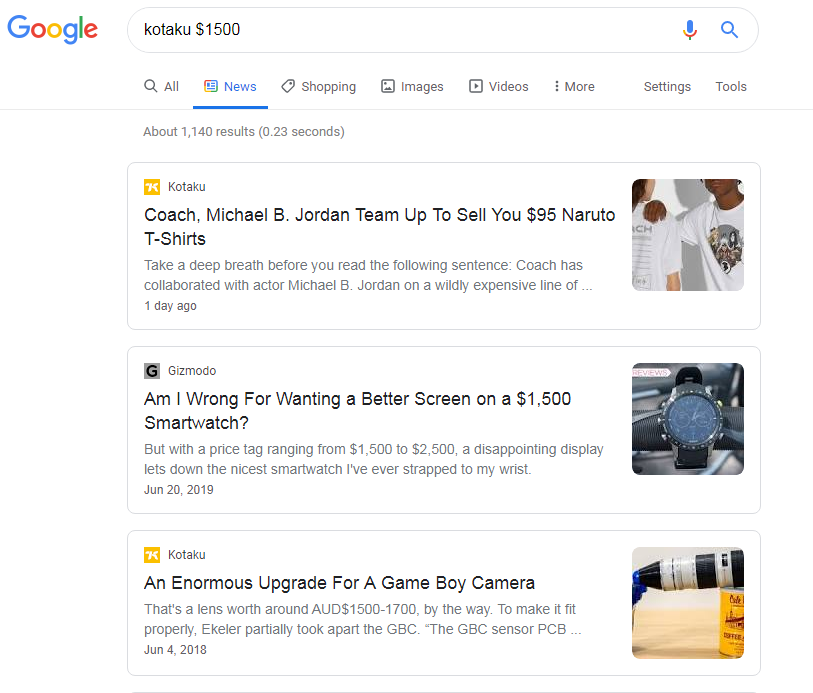 However, with larger YouTube outlets like TheQuartering broadcasting the news throughout the general public, maybe it will help spread the word and get more outlets talking about it?