White Nationalism has become the mainstream media’s favorite boogeyman. More powerful than Gamergate – the Illuminati like organization of uber-Nazis whom have concealed themselves with Hydra-like precision to orchestrate events from the shadows – white nationalists are responsible for all the defiance against radical socialist programs the Democrats and media attempt to push forward. Embolden by the God Emperor of humanity, Donald Trump, they increasingly pose a threat solely around movies, entertainment, television and games by convincing people something is bad and to not engage with it. They also pose a threat in politics by solely not voting Democrat, and by harassing Democrats with vile things such as facts, statistics, the truth, historical analysis, the Dem’s own words, actual science, and just about everything a civil discourse would have minus any actual violence and credible threats.

The entire narrative that White Nationalists lay behind every corner, but appear to only strike at Hollywood, Democrats, and the media appears to be as absurd as it sounds if a leaked FBI document from August, 2019 is to be believed.

Rather than the White Nationalists boogieman constantly spun up by the media, the FBI’s document goes on to detail how “Black Identity Extremists (BIE)” egged on by the media posed a far graver and real threat. 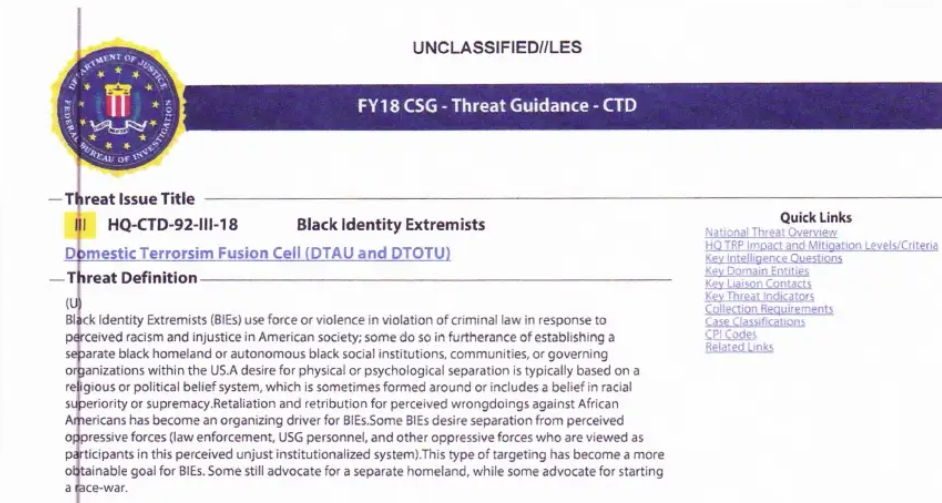 As borne out by 2007 FBI statistics showing black on white crime exceeds white on black crime by a factor of 8, black male on white male violence reaches roughly 40 times. This was before the FBI was ordered to stop keeping track of crimes by race as it was not revealing data that coincided with the message the media and Obama regime wanted to present.

Though the FBI has largely been utilized as a politically driven bludgeon against Trump these last few years with the distinct possibility former director Comey may see prison time for his abuses of power, it is highly unlikely the agency abandoned the full scope of its duty. The sheer fact the FBI is able to identify BIEs as graver, more common and a significantly greater threat than White Nationalism, somewhere in the FBI racial data statistics have to be calculated.

Unless anyone wishes to offer conclusive reasoning as to how FBI’s assessment can boil down to a dart against a board of potential threats to tackle, yet simultaneously have extensive details on the operation and scope of said group the FBI’s assessment stands as legitimate. Regardless of the detractions from Democrats, the Media, and the Young Turks who leaked the document have on the document.

Kim Klippenstein, writer from the Young Turks and leaker of the document, went on to denounce the document and FBI claiming:

“While the documents depict concerns about violent black extremist attacks, they do not cite a single specific attack — unlike white supremacist attacks, of which several prominent examples are provided,” he said.

Though they would go on to presumably fail to cite a single example that wasn’t eventually revealed to be a Left-leaning extremist or deranged Machiavellian psycho who would also cited Spyro the dragon for his inspiration. Due to the absolute lack of evidence from any major White Nationalist movement in the U.S., the FBI was quoted saying… 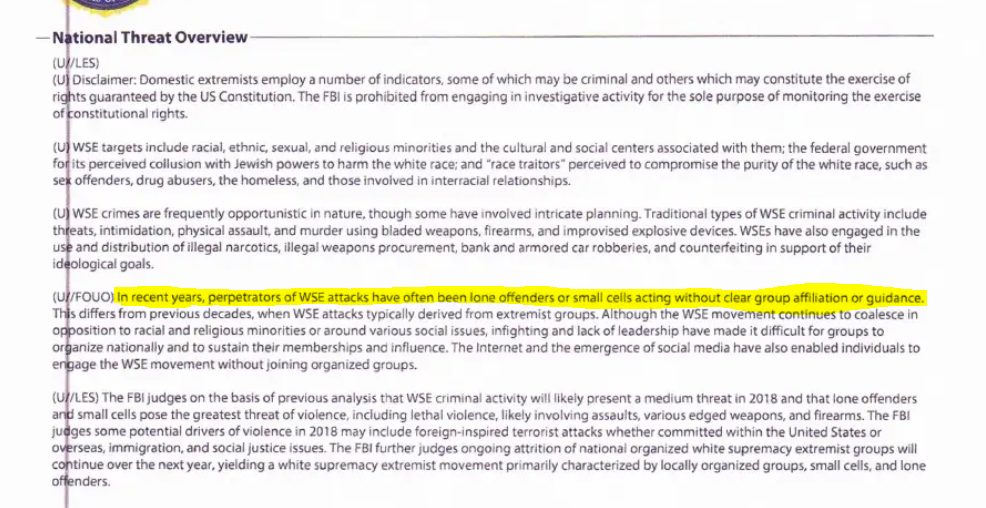 Despite the FBI’s statement, if the media were to be believed White Nationalists are hidden everywhere with significant power over the masses. Power so great not a single media outlet is intimidated as they are in the case of Communist Terrorism and Islamic Terrorism. Ruby Rose, lead actress in CW’s Batwoman feels entirely safe denigrating white men with her producers unable to even lose a wink of sleep after the provocation, compared to Comedy Central censoring a 2010 episode of South Park depicting the prophet Muhammad.

The legacy media will without a shred of reflection denigrate men, mostly white, as economically not attractive failing to grasp the study they’re reporting on calls women gold digging whores all without a single reprisal attack since the study dropped. Yet White Nationalism is, according to the Young Turks and Democrats, this massive terrorist hydra that permeates the United States waiting to strike at every corner only to for some inconceivable reason failing to carry out a single attack against anyone provoking them.

If the media’s claims are to be taken at face value, white maleness is so evil it will carry out attacks because they needed to be inspired by the movie The Joker and now that The Joker is here, the previously super terrorist threat will now be inspired to actually commit mass shootings. When you lay out their argument logically end to end it sounds absurd.

When the FBI identifies BIE as far more active and credible threat, what do the politicians do? Demand the FBI stop using racial language, only turn around and complain when they remove white nationalism in addition to Black Identity Extremists. Decrying it as racist for the FBI to do exactly what they were told to do by the same people calling them racist. Never mind they’ve gradually stretched the criteria for what constitutes a race based offense to the point where any white on black crime regardless if race was a motivating factor is considered a race crime. With those inflated statistics still didn’t even come close to bridging the gap in the FBI’s data. The FBI simply must not be doing its job diligently enough to uncover this threat.

Once again to the surprise of no one the left has cooked up a new boogieman to push forward their agenda. A boogieman so impotent that the best it can do is make some actresses and actors feel unsafe and somewhat impact box office returns. That is so ready to action that they need a movie to finally inspire them to do anything in spite of months of glorification by the media to compel incels to carry out mass shootings.

This amounts to nothing more than a sad, dying gasp of the legacy power, as the pendulum swings in the opposite direction, with the belief that painting the majority of the voting public and financial base as inherently evil will somehow allow them to cling to power.