Minnesota lawyer Nick Rekieta has been one of the vanguards in the social media front for keeping anime fans and weebs alike apprised of the news regarding voice actor Vic Mignogna’s lawsuit against Funimation, Ron Toye, Jaimie Marchi, and Monica Rial. However, while the judge ruled against Mignogna and threw out the remaining claims, making him 0 for 17 on the legal scoreboard, Rekieta found his Twitter account suspended. 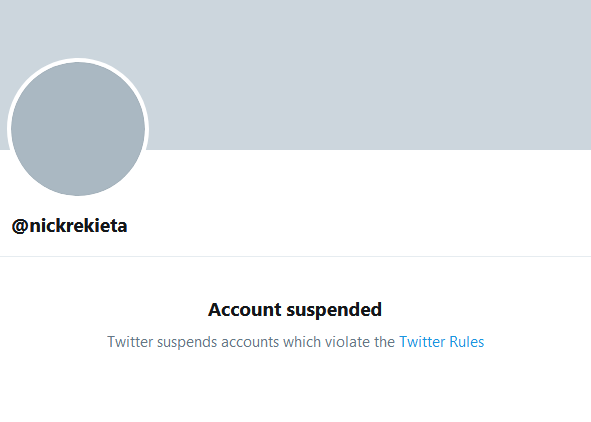 Leading up to the suspension the #KickVic crowd – the antagonist trying to deplatform and kick Vic Mignogna out of the anime and voice acting industry because they allege that he’s a harasser – were hounding him hard.

On the morning of October 4th, 2019, Twitter user Queen_Bee_Ari took note that a lot of Rekieta’s tweets were deleted, asking if everything was okay.

This isn’t the first time that Rekieta has been suspended from Twitter.

He was hounded down and suspended before back in mid March. However, with a little bit of wrangling and appealing he managed to get his account back.

Whether or not he’ll be able to pull it off again remains to be seen.

This comes on the cusp of the Mignogna case taking a terrible turn for the voice actor’s fans, as the judge dismissed all of Mignogna’s claims against the aforementioned individuals for tortious interference and defamation.

YouTuber Hero Hei went over the details of the case and the outcome, much to the disappointment of Mignogna’s fans.

The news was also covered by Dallas News in an opinion piece, where they outlined the general gist of how the mediation period failed between the two parties and the judge ended up ruling on Mignogna’s case with unfavorable terms…

“State District Judge John Chupp dismissed the remaining claims in the defamation lawsuit that Dragon Ball star Mignogna filed in April against his former employer, two of his Dallas-area colleagues and the fiancé of one of the women.

“Chupp’s action came after mediation efforts this week failed to get a resolution.”

Interlaced between the facts are a lot of opinionated potshots taken at the expense of Vic Mignogna.

This is a recurring theme in the way the media covers the event, making it as if this is a win for the #MeToo movement, even though all of the allegations and smears against Mignogna are based on unsubstantiated claims.

Worse yet is that they’re already using this court loss as an attack vector to claim that the allegations were true, which isn’t what the lawsuit was about, but that’s how some of the #KickVic groupies are treating it.

The best part about @TyBeard10 f*cking this case up so thoroughly is that, for all practical purposes, Vic Mignogna is now a sexual predator as a matter of law 🙃

Women claimed Vic assaulted them. Vic claimed they were lying. The Judge just concluded they weren’t.

Vic Mignogna lost all 17 suits. So just remember, if your day is going bad just remember you didn’t make an ass of yourself today by being a sex pest that took 17 L’s. pic.twitter.com/xYgnQRsR5W

Most normal people are calling this out for clear and obvious corruption.

Mignogna lost his job at Funimation and Rooster Teeth off the back of spurious, unproven claims. And he wasn’t even able to clear his name of the false allegations that tainted his public character and cost him work.

It’s an indication that cancel culture can ruin someone’s life and get away with it so long as they manipulate the court system in the right way.