SwimsuitSuccubus, a lesbian cosplayer known for posting sexy imagery on her timeline, was suspended from Twitter on October 11th, 2019.

SwimsuitSuccubus’ girlfirend, Bunny Ayumi, tweeted out about the suspension, asking Twitter’s support why the account was suspended.

Why is Susu’s account suspended @TwitterSupport ? She didn’t do anything wrong and there was no prompt of why she was suspended. pic.twitter.com/ZGFUg13J4i

Various other cosplayers and followers also tweeted out queries about the suspension, asking Twitter what rule she broke and why was she being suspended?

Hey, @Twitter @TwitterSupport why was @SSSuccubus suspended without warning, and without her breaking any rules?
You treat your own users unjustly, this is not the first case I see this happen. Fix it.

If you attempt to visit her Twitter porfile, you’ll be greeted with the following message. 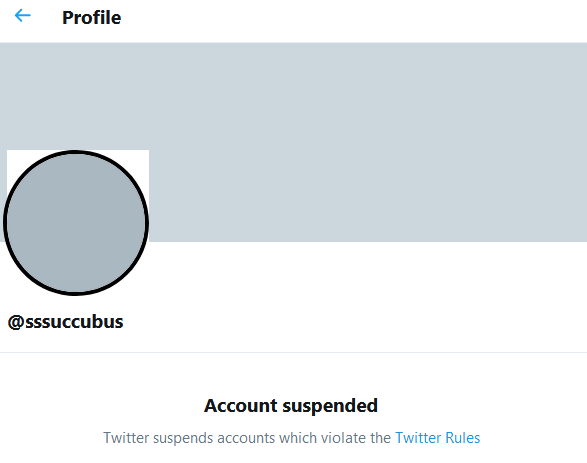 Some think that Twitter made a mistake, or that maybe she crossed someone, or perhaps there was a mass reporting campaign to get her account nixed.

Right now, not even the people closest to her know why her account was suspended and Twitter isn’t saying.

It’s ironic because SwimsuitSuccubus gave up on using Instagram due to people mass-reporting her images and trying to get her deplatformed. She stated that she was going to be focusing on her Twitter account, writing on Instagram…

“I don’t use IG anymore. Pics keep getting reported/deleted. ⬇️Go to twitter for my photos twitter.com/SSSuccubus”

New photos will be available soon on my patreon! Link in bio💖 Photography by @daijoubeauphoto

It’s definitely one of the cases of censorship worth keeping an eye on, because if this begins to happen more frequently it means Twitter could be enacting a crackdown on certain accounts.