Instead of focusing on adding more games to their library or providing users with a reason to even boot up the Xbox, Microsoft is focusing on the ever tinder-hearted crowd of snowflakes that have defined this embarrassingly fragile generation of gamer. How so? Well, they have a new update in the works designed around filtering out messages to create a “safe space” for users.

The new update will allow users to make use of four different settings for when they receive messages, going from “Friendly” to “Unfiltered”, with “Medium” and “Mature” stuck in between.

“Friendly” means only safe-space interactions are allowed. “Medium” means a bit of trash talk will slip through, while “Mature” will allow for more adult language, and “Unfiltered” means anything goes.

You can see how the new system works with the demonstration below.

You can modify all of these settings along with the kind of content you can view by going into the “Safety & Online Options” through the settings menu.

Now the feature itself will not automatically censor any content you don’t want censored. So if you want to keep all of your content unfiltered, you can. This means you can receive any kind of messages or media you want from people you know or people you don’t know.

Alternatively, you can modify the settings to filter out anything that harms your snowflake-constructed feelings. 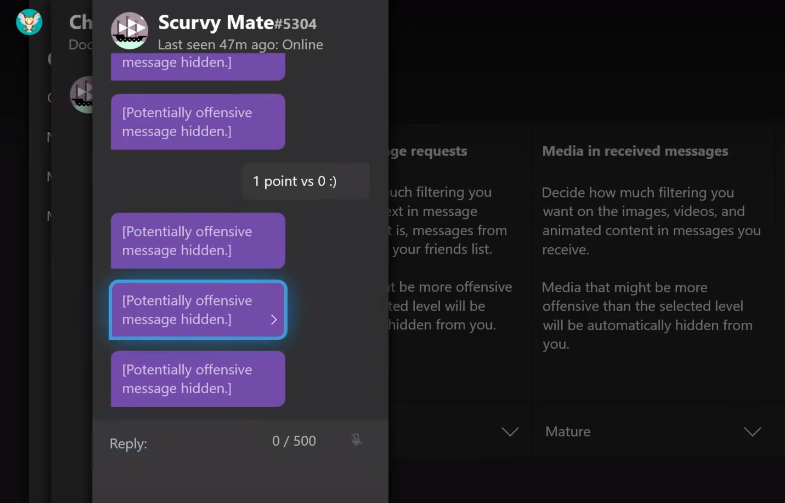 I’m of the firm belief that quality of life features should only be added AFTER you have a solid library of games to offer users. Nintendo may have caught some flak for launching the Switch without any app support, but they focused the first two years on just getting out a really solid supply of noteworthy games, and it paid off for them. Most people are too busy enjoying the games to worry about extraneous apps at this point in the Switch’s lifespan.

Microsoft went in the complete opposite direction, front-loading the Xbox One with a ton of apps during launch but providing gamers with barely anything noteworthy to play.

They still seem to be focused on quality of life features and media streamlining than focusing on building out exclusive features or a library of must-own games. There’s literally no reason at all to own an Xbox One and not a gaming rig.

Now to be clear, I don’t hate this feature – and hopefully it will make all those weak whiners finally shut up about “harassment” and “bullying” since they don’t know how to use the mute or block button – but for crying out loud it would be nice if Microsoft focused all of its resources on making games people actually want to play instead of constantly trying to chase after the ambulance sirens from the social media safe-space cult. It seems like every major announcement and update from them is about wasting time and resources trying to police the world’s behavior.

If people had fun games to play they wouldn’t have so much idle time to lollygag and hover over nonsensical thing like “bullying” and “harassment”.

(Thanks for the news tip General Genocide)