The LGBTQIA+ set their richly colored iron sights on Chick-fil A and had targeted them for being a religious organization, something that’s no longer acceptable in today’s perversely degenerate Western society. Freedom of association, freedom of religion, and freedom of speech are deeply despised facets of the nation for anyone on the Left, especially if you aren’t Muslim, a terrorist, a rapist, or don’t identify as a straight, white male. Well, after being bombarded with threats of boycotts and deplatforming, Chick-fil A finally gave up fighting the good fight, and decided to only cater their business charities toward organization preferred by the Rainbow Reich.

If you read the initial blog post on the Chicken Wire, it only announces that starting in 2020, the Chick-fil A Foundation will prioritize hunger and education in its charity initiatives.

“Since the beginning of the Chick-fil-A Foundation, more than $52 million has been donated to support education, entrepreneurship and leadership development. The Foundation has made these changes to create more clarity and to better address three critical needs facing children across the communities we serve.

“Additionally, the Foundation will no longer make multiyear commitments and will reassess its philanthropic partnerships annually to allow maximum impact. These partners could include faith-based and non-faith-based charities.”

If you notice in the charity list they are now only donating to the Junior Achievement Foundation, the Covenant House organization, and they will be donating $25,000 to food banks.

Outlets like the Daily Caller more astutely pointed out that previous charity organizations such as Fellowship of Christian Athletes and the Salvation Army won’t be supported by Chick-fil A throughout the 2020.

I’ll say this and then I’m done talking about @chickfila: The fact that the mainstream media has reduced the Salvation Army — one of the most important humanitarian groups around — to an “anti-LGBTQ organization” tells us everything we need to know about our current culture.

This comes after years of media outlets bombarding Chick-fil A for donating to organizations that the media didn’t like, as noted by far-Left outlets such as Think Progress.

Outlets like USA Today also hampered on the fact that not everyone at Chick-fil A is pro-gay marriage.

We now see this news trending all over social media, and Twitter gave the news both an event and a moment to ensure everyone saw it. 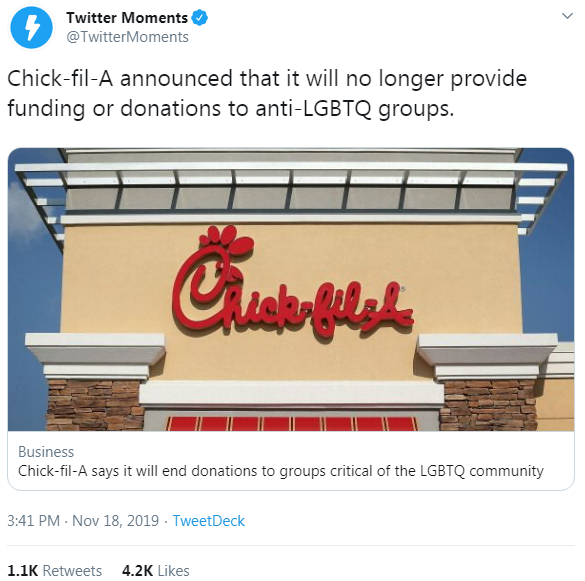 It’s a sociopolitical scalping that continues to help cede power to the Rainbow Reich.

Why did the company fold now? Why did they relent at this point in time?

Anyone who isn’t drenched in the tie-dye flavored Kool-Aid knows very well that this is just more of the Left continuing to etch away at Christianity. Some of the comments on the Chick-fil A sub-reddit said as much.

As noted in the Daily Caller, it’s still possible that the Salvation Army could be on the donation docket at some point in the future, but it won’t be in 2020.

The company did issue a statement saying…

“We are saddened to learn that a corporate partner has felt it necessary to divert funding to other hunger, education and homelessness organizations — areas in which The Salvation Army, as the largest social services provider in the world, is already fully committed.”

“We serve more than 23 million individuals a year, including those in the LGBTQ+ community. In fact, we believe we are the largest provider of poverty relief to the LGBTQ+ population. ”

This kind of dogmatic pressure put upon corporations and organizations to either separate from companies deemed “problematic” by Cancel Culture cultists, or risk deplatforming, says everything you need to know about how intolerant the Left actually is.

Unfortunately they control all the mainstream media, banking, big tech, and payment processing, so everyone is bending to their will.

(Thanks for the news tip TempestArcade)