Led by Anne, the Profane Feminist, a group of Social Justice Warriors were on a thread along with Unseen Japan, talking about going after YellowFlash’s Patreon account on October 30th, 2019. 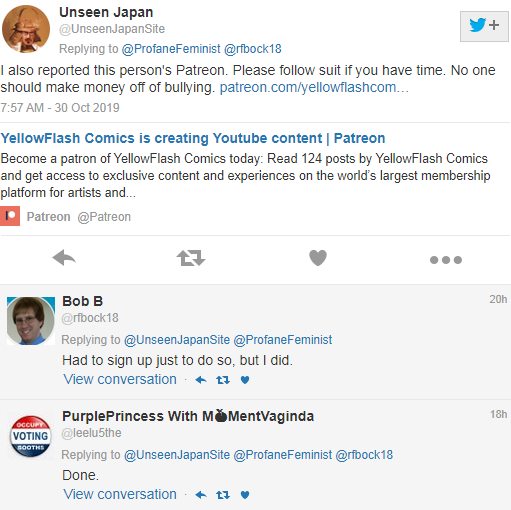 This was in response to a video that YellowFlash published on October 29th, 2019 pointing out how they were trying to get the Shonen Jump magazine featuring some ample fan-service from Yuuna and the Haunted Hot Springs censored.

All of this happened because in the weekly magazine there was an image of Yuuna on the cover of the magazine with mist covering up her nipples. On the other side of the page there was a comic featuring the characters eating tapioca soup. The tapioca bubbles were conveniently in the design of highly detailed nipples. When the cover was placed under light with the page of the soup pressed against the cover, the nipple-shaped bubbles would shine through the cover and it would look like Yuuna was topless on the cover of the magazine.

SJWs hated this clever trick and freaked out about it online.

Thousands of people supported the fake manga fans in wanting the content censored, but plenty of real fans also stood up and fought back.

Content creators like YellowFlash spreading the news about this incident managed to ratchet up their ire, resulting in them targeting the YouTuber in hopes of getting him deplatformed from Patreon.

They also went after One Angry Gamer’s advertisers and domain host, in hopes of getting the site deplatformed.

This goes back to these people wanting to censor content they don’t like and to deplatform anyone who speaks out against them.

Anyone who isn’t 110% against them will eventually allow them to take over and ruin your hobbies, your interests, your entertainment, and eventually your life.

If you would like to support YellowFlash, you can do so by visiting his Patreon page.