Fancy building a harem of hotties? Perhaps you like the idea of upgrading your courtesans with special equipment and deadly armament? Well, if you’re into mixing and matching a bit of sex and violence in a cyberpunk setting, then A Memory of Eternity’s Memoirs of a Battle Brothel might be up your alley.

The game is currently seeking funds over on Kickstarter. It’s a narrative-driven RPG set in a futuristic society where the player is given the ability to create their own character who comes from a variety of different backgrounds. Different backstory stats may affect how certain NPCs interact with you, and can alter the outcome of the choices you make throughout the 20 hour play experience.

Your objective, however, is to gather resources, hire prostitutes, and build up a battle brothel where your ladies can clamp down on enemies in more ways than one.

It’s interesting because Memoirs of a Battle Brothel takes the slice-of-life, reconstruction trope oftentimes found in farming sims and island paradise RPGs but applies it to the cyberpunk setting and slaps a cathouse motif on top of that.

You’ll be in charge of gathering up supplies, equipment, and all of the accompanying accouterments required to make your brothel a smash hit success.

Of course, along the way you’ll encounter friends and foes alike, some of whom will attempt to help you grow your brothel and others who will attempt to do anything within their power to see it fail.

You’ll have to use both wits and tech to overcome your opponents, either by diplomatically undermining their position via blackmail, or by taking your battling beauties onto the battlefield and fighting them head-on using the latest and greatest tech that a bordello of babes will allow you to buy. 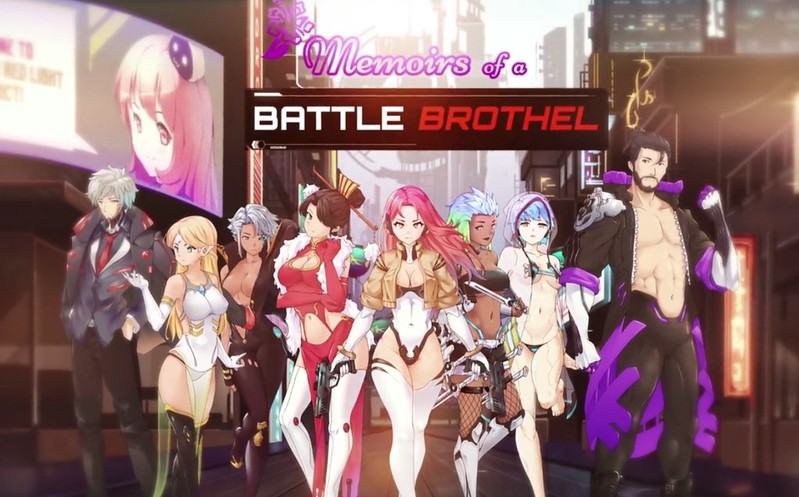 The combat is themed around turn-based mechanics on a grid layout, so if you’re familiar with the Tactics Ogre, Battletech or Shadowrun style of combat, then you’ll be right at home with Memoirs of a Battle Brothel.

Of course, the most exciting element of the game is all of the content they couldn’t show you during the Kickstarter campaign… namely all the sexy-time adult content.

The developers are certainly taking a page out of Studio FOW’s book by marrying actual hardcore gameplay with hardcore adult content.

Unlike Subverse, the team is currently struggling to make bank on the Kickstarter campaign.

They have just over two weeks to go and have only managed to accrue $3,800 of their $52,000 goal. So it’s not looking good right now, but maybe if they ramp up the promotion or take the game to allied outlets they might be able to get a bit of views on the title before the Kickstarter campaign wraps up.

If you would like to learn more about Memoirs of a Battle Brothel, feel free to check out the Kickstarter campaign.

If all goes as planned they expect to have the full game up and out on Steam and itch.io at some point in 2020.

(Thanks for the news tip Space Dragon King Ghidorah)