There’s a post on KotakuInAction2 detailing how the Reddit administrators are working overtime to censor the name and exercise the banhammer against anyone or any sub that mentions said name.

The crux of the issue comes shortly after a Reddit spokesperson told CNBC in a story published on November 12th, 2019 that they would not be censoring the name of the whistleblower, saying…

“In a statement, a Reddit spokesperson said the company does not ‘have a specific policy around whistleblowers. Our policy encourages an open discussion regarding issues of public and political relevance, however it forbids posting of personal information, or the encouragement of harassment or vigilantism.’ Reddit will take action on posts that violate its policies, the spokesperson added, saying that ‘[c]ontext is important in these matters.’”

Now Reddit is walking back those statements, joining YouTube and Facebook, who began instantly censoring and blockading people from exposing the whistleblower’s name, as reported by journalist Tim Pool.

The KotakuInAction2 thread pointed to a message that the administrators sent to the moderators of /r/The_Donald/, a sub-reddit themed around President Donald Trump, which was previously quarantined by the administrators to whittle down momentum and lower engagement from potentially new subscribers heading into the 2020 elections. 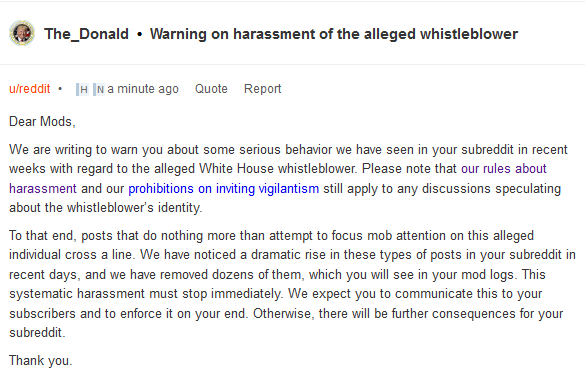 The_Donald’s moderators quipped about the Communistic-style approach that Reddit is taking with ensuring that the whistleblower’s name is censored on their platform.

The head mod of KotakuInAction2 explained that the comments that were made on The_Donald were not in violation of Reddit’s rules, and that the administrators have simply gone off the deep end in enforcing an aggressive censorship policy to protect the whistleblower…

“We here at KiA2 have been struggling mightily to make heads or tails of this vague, amorphous, blob of a rule to have any minimal objective standard to enforce. Despite my best fucking efforts, it fundamentally comes down to administrative bigotry and bias. Beyond explicit calls to action, the best we can identify is that it could be a “mob” action if no one disagrees with a stated premise, and the premise is theoretically hostile.

“This is not what happened. Thanks to /u/FreeSpeechWarrior and Subreddit iconr/Reclassified we were able to see that some of the posts are completely innocuous. One specifically is a post titled, “Say”[NAME REDACTED]”‘s Name” linking to a Red State article of the same name. The comments in the post are non-hostile. They even removed a screenshot of the CNBC article’s title which didn’t contain the name of the whistleblower.”

This kind of crackdown on speech is all par the course for most Leftist-ran social media sites and big tech outlets.

We’ve seen YouTube and Google cracking down on “hate speech”, which they seem to define as any sort of content, language, imagery or even history that they don’t like, and we’ve seen Twitter and Facebook ramping up their censorship efforts as well.

As pointed out by the moderator of KotakuInAction2, it looks like Reddit is engaging in out-and-out censorship of the Fourth Estate…

“Let me be fucking crystal clear: RealClear Investigations, Town Hall, The New York Times, Politico, The Hill, Tim Pool, John Solomon, and Yashir Ali have all released this person’s name. There is no question in my mind that the Admins are explicitly censoring journalism which is in compliance with their own rules.”

They already see the writing on the wall and have opened up a sub on Saidit.net at the following address: https://saidit.net/s/KotakuInAction/

If the administrators decide to finally nuke KotakuInAction2 (and at this point it’s a matter of when not if) then there is a fallback sub for the users.

Unfortunately, retreating to a smaller community doesn’t change the fact that big tech are brandishing the sword of censorship like a hair-strung blade hanging over the head of freedom, just waiting for one good flick to cut down your rights in the blink of an eye.