Don’t like what someone has to say? Well, don’t listen to them. That’s how it used to be in America. If someone wrote something you didn’t like or said something you didn’t like, it was very possible to simply ignore them and focus on people who did say or did things you liked. But in today’s society Cancel Culture rules over all, and One Angry Gamer has come under the microscope of one of the biggest proponents of Cancel Culture, Sleeping Giants.

After an article was published about Cancel Culture cultists getting pundit Stefan Molyneux deplatformed from PayPal, Sleeping Giants took aim at the author of the article and a passage that pointed out that Democrats and Liberals are some of the most racist people on the planet.

I don’t care who or what is behind OneAngryGamer. What I care about is that this pro-Nazi website is:

This is #adtech in 2019. pic.twitter.com/pVwjcdahTp

Here’s an image of the tweet in case Jammi decides to delete it. 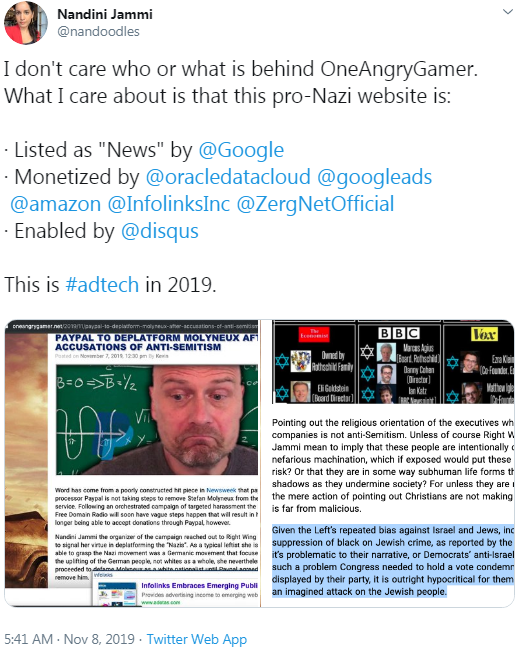 Not content with simply highlighting her displeasure with the article and the site’s content, Jammi proceeded to tweet at all of the advertisers in hopes of getting them to stop advertising on One Angry Gamer.

They’re probably going to have to get back to you on that, because @Criteo doesn’t even know how to keep its OWN brand safe.

Welcome to the “best-in-class advertising technology solutions” brought to you by fucking @Criteo. pic.twitter.com/F7DCc1Pnjq

Hey @RE_Games, I don’t know what @playwire told you!
But your ads have been playing non-stop since I arrived on this anti-Semitic website.

I recommend you find out how this happened & ASK FOR A REFUND. pic.twitter.com/zMTb0auqKx

For clarification, One Angry Gamer doesn’t have direct advertisers. Ads are supplied through ad vendors. So we don’t know who is advertising with us because that’s all handled by the ad brokers at the vendors.

Nevertheless, some of the advertisers pulled out from the vendors that supply ads on One Angry Gamer.

If enough advertisers pull out from the ad vendors what usually happens is that the vendor loses contracts with the advertisers and the broker responsible for building the company’s portfolio will get fired. Alternatively, we will simply move to another ad vendor who will resupply our ad inventory.

However, the people who perpetuate Cancel Culture don’t consider that other people will lose their jobs that have absolutely nothing to do with One Angry Gamer. They don’t consider that they’re taking food out of someone else’s mouth, or putting a completely innocent ad broker on the chopping block in order to deplatform a website that criticizes the inhumane antics of people who continue to proliferate Cancel Culture.

In any case, this is nothing new for Sleeping Giants.

They describe themselves as fighting against “bigotry” and “sexism” to make it “less profitable”. 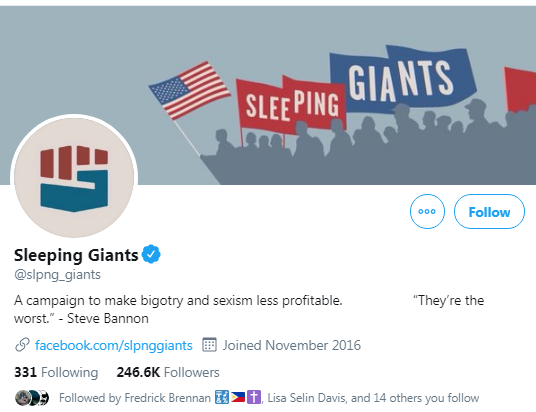 The account is well known for getting other people, organizations, and websites deplatformed, or having their advertisements pulled.

In fact, Sleeping Giants was responsible for getting advertisements from Breitbart pulled back in December of 2018.

CONFIRMED: @DesignMuseum has blocked Breitbart from their media buy! Thanks so much! https://t.co/YDgyUPcVD8

Sleeping Giants was also reportedly the one behind getting PayPal support pulled from SubscribeStar, in an attempt to demonetize Sargon of Akkad, Tim Pool, and Mike Cernovich, among others.

One would think that in their fight against “bigotry” and “sexism” they would have more important targets to focus on rather than a tiny little gaming website that brings you gaming news without remorse.

This leads me to one of two possibilities…

Either Jammi has an insatiable and unwavering fascination with OAG’s distinctly masculine charm, or maybe she’s just jealous about the site’s continued success in exposing the agenda of Cultural Communists?

(Thanks for the news tip anon)