The localization team working on the Yakuza remasters don’t seem to have much respect for the original art that they’re supposed to be translating. That has become seemingly evident with the Yakuza 4: HD Remaster for the PS4, where the English version of a conversation has been censored that contained the word “rape”. This is despite the fact that the game is rated ‘M’ for Mature by the ESRB.

Sankaku Complex picked up the news after being made aware of the incident from an observant Twitter user, Noxa.

Wow… The Yakuza 4 Remaster localisation has been censored. Subtitles have changed from Hana being afraid of being raped and Akiyama making a mean joke to this in the screenshot. You can still hear him clearly say “rape.” pic.twitter.com/Q6IY9vVgrV

Sankaku Complex proceeded to show the comparisons between the original English version of Yakuza 4 and the Yakuza 4: HD Remaster, where the dialogue had been altered between the characters Hana and Akiyama.

You can see the comparisons below. 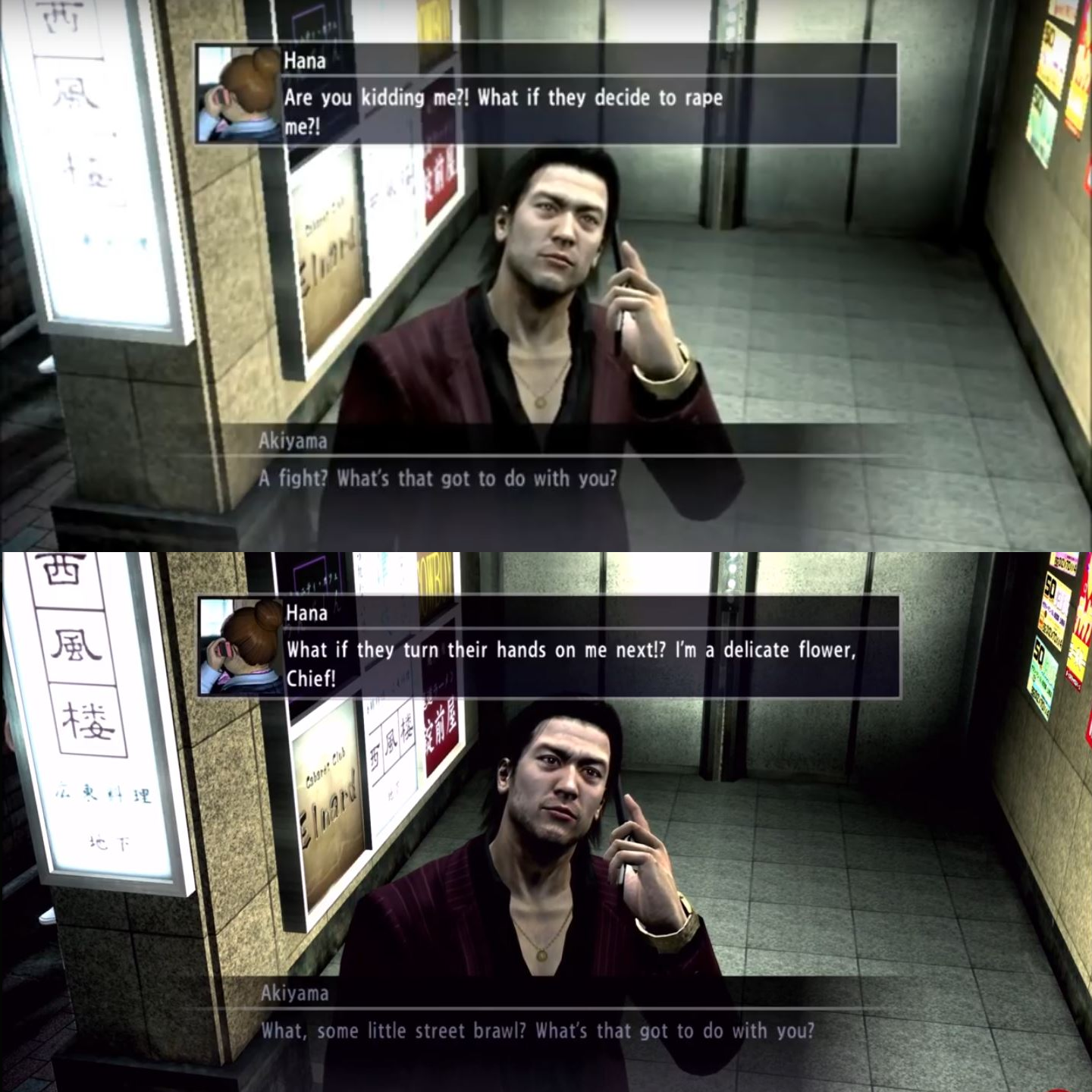 Pro-censorship advocates will likely try to use the excuse that the text is fake or modified and that the original didn’t actually say that, but Sankaku Complex went the extra mile to also include video footage of the scene in question to shut down the pro-censorship critics.

You can see the scene from the Yakuza 4: HD Remaster below, courtesy of YouTuber Red Venom Corp.

There’s also the original PS3 version of Yakuza 4 with English subtitles that shows what the character Hana had originally intended to say, and the mean-spirited joke made at her expense by Akiyama, courtesy of SilentProtag.

This kind of censorship isn’t new to the Yakuza series.

The Yakuza 3: HD Remaster was also heavily censored, both in its native Japanese re-release and for the English localization.

We actually had a heads-up about the Yakuza 3: HD Remaster censorship courtesy of Daisuke Sato, who revealed that the game would be censored as far back as May, 2018 in an interview with GNN.

However, pro-censorship advocates on KotakuInAction spread fake news convincing people that it was a mistranslation and many gamers were misinformed and led to believe that the HD remaster would not be censored, even though it was.

You can see all the changes that were made to the Yakuza 3: HD Remaster courtesy of Censored Gaming.