Blacksad: Under The Skin Gameplay Walkthrough And Choices

Ys Interactive and Pendulo Studios’ Blacksad released during the turbulent November, 2019 slate where it had to compete with a bunch of other big titles coming out at the same time. Even though it had the benefit of releasing on multiple platforms, including the Nintendo Switch, PS4, and on the Steam store for PC, it did so while everyone was talking about the big AAA releases. Nevertheless, if you did manage to pick up a copy and you were looking for a little bit of help, there is a walkthrough guide available.

YouTuber AdventureGameFan8 has a 17 playlist for the Blacksad: Under The Skin walkthrough, covering the game from start to finish. You can check it out below.

The game starts with a cinematic of the gym boss hanging from the ceiling. After he’s discovered and the loading/tutorial screens are finished, Blacksad will appear in the office and an angry rhino will start fighting with him.

There’s a quick-time fight scene where you can choose how you fight the rhino.

The first big choice you have is either taking the money from the rhino Eugene Colbert or you can deny the deal. If you take the money then Eugene’s marriage isn’t put at risk due to the compromising pictures. If you deny the money, then John ends up with a gun and an empty wallet. 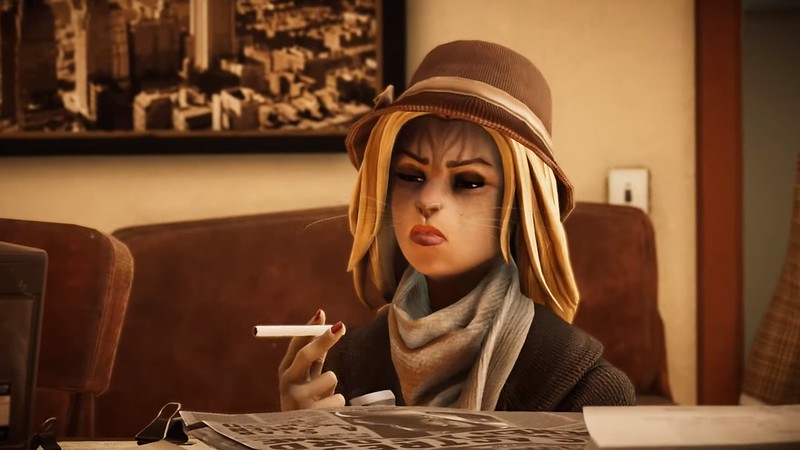 Another client will come in and Sonia Dunn will offer John a job to find Bobby Yale. You can accept or decline it, or propose that it will be expensive to complete the case.

After the cinematics end, you can view the picture of Joe Dunn playing the saxophone and then head up to the roof to grab the hall of fame sticker.

Proceed back down to the gym and examine the noose.

There’s another piece of the hall of fame over by the chalkboard next to the ring.

Another sticker is located in the bathroom by the sink.

Go into the locker room area and attempt to open the locker with the graffiti scrawled across it. 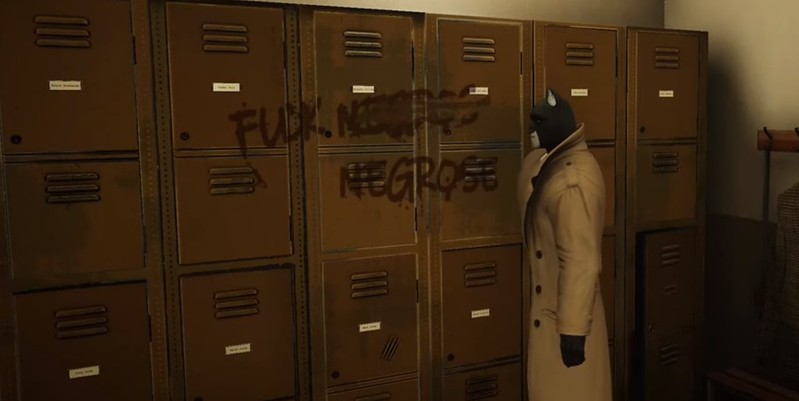 Exit the gym through the side door into the alley.

You can talk to the crippled veteran, and if you ask him if he needs anything he will ask for cheese.

Exit the alley and go out front to read the notice on the door.

Walk down the street and Blacksad will enter into the diner to talk to Mary Purnell about Joe Dunn’s death. 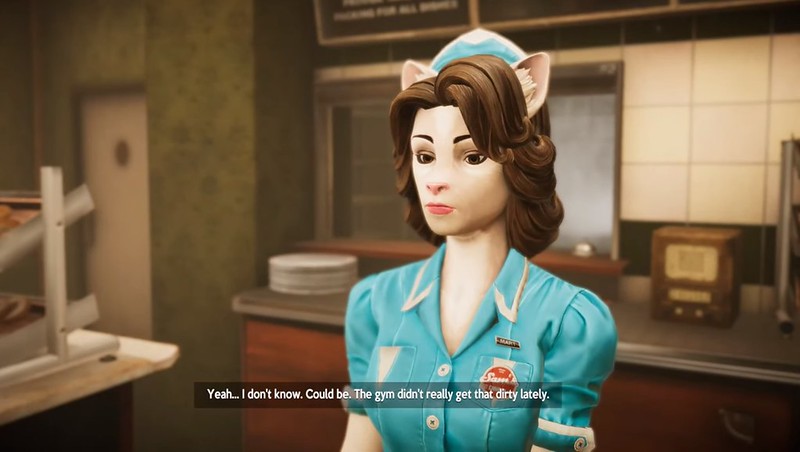 You’ll have a choice during the conversation to suggest to Mary to either keep working at the gym or to stay away from the gym for her own safety.

You can also ask Mary for a burger with cheese.

There’s a segment where you’ll need to use Blacksad’s senses to pick up clues.

Examine Mary’s handwriting by looking at the note.

Examine Mary’s neck to pick up a scent of cinnamon.

Take the burger with cheese to the homeless veteran and he will reveal that four people entered into the gym on the same day as Joe Dunn was hanged.

Ask about the four people who entered the gym.

The goat will give you some clues about an object being tossed in the trash, as well as the stature of the four people who entered the gym.

You can also use Blacksad’s senses to take notes of the goat’s behavior.

When you get finished talking to the goat, head back to the gym and examine the locker — choose to go back to the office so you can retrieve the lockpick kit.

You can examine Natalie’s photograph, as well as use the phone to make a few calls to persons of interest.

You can also call Blacksad’s sister and ask how they’re doing.

You’ll find the lockpick kit behind the couch. As you begin to move the couch the phone will ring again.

Finally, you can call Mrs. Colbert and inform her about her husband’s infidelity. You can either lie about his cheating or tell her truth. If you had no scruples you could technically take the money from the rhino and then tell her the truth anyway.

Once you’re done with the office, you’ll need to head to Bobby Yale’s apartment; the rhino, Colbert, will be there with his partner.

If you told Mrs. Colbert about the rhino’s affair then he will be angered at his life being ruined.

Use Blacksad’s senses to examine the lapel on the yak and he will reveal that O’Leary is his boss.

When he asks Blacksad what he’s doing there, tell him that you know Colbert and his wife.

They will eventually let Blacksad go, who will return to the gym. 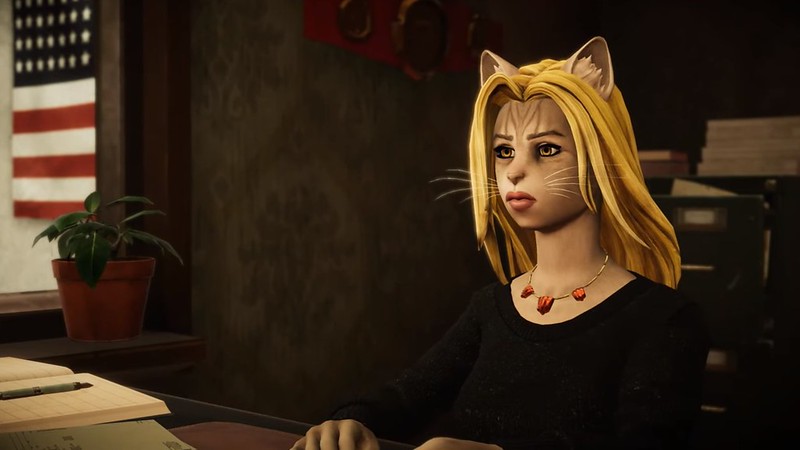 There’s a note you’ll find just inside the gym. Take the note to Sonia and inform her that the ring might have something to do with her father’s death.

Examine Sonia’s heartbeat and makeup and conclude that she’s “as cold as ice”.

If you examine the photograph behind Sonia Blacksad will discover someone is taking photos from the rooftop.

During the conversation with Weekly, you’ll need to get the get real information on Cassidy; make the suggestion to Weekly and he’ll agree to investigate Cassidy if you can get him an interview with Sonia.

Combine the clues that Mary has nice handwriting and she also sent Sonia the wedding ring that Joe wore.

Then combine the clues that Mary called Joe “Joey” and that Joe left Sonia after his wife died. This will create the deduction that Mary and Joe may have been together.

Examine the index of names and dates to get Mary Purnell’s birth date and then use her birth date to open the safe.

Examine Joe’s last will and testament.

Talk to Sonia again about the contents of the safe.

Examine the gun and the petty cash in the safe.

You’ll also be able to choose to either inform Sonia about Mary and Joe’s relationship or you can keep it a secret from Sonia.

You can also ask Sonia about Jake or Bobby Yale. However, Sonia will be perturbed about being queried about Bobby and Jake.

Go down to the gym floor — examine the spilled paint can, and there’s another card on the scaffolding.

Ask about the gun in the safe. Bobby Yale. Sonia, and the graffiti.

Go to the locker room and use the lockpick kick on Yale’s locker.

Open Jake’s locker and examine the photograph of Natalia and the cloverleaf.

Use the deduction menu to combine the clues that the buffalo had the Irtish cloverleaf lapel and Jake was angry about John’s query into O’Leary.

Combine the clue about Arthur Tucker’s paint stains with the smudged racial slur on Yale’s locker.

Talk to Jake again about the O’Leary, and tell him about the lapel to convince him to fess up about working for O’Leary.

Jake will eventually fess up to being there the day Dunn died.

After talking to Jake, head to the diner to talk to Mary — talk to her about her birthday, and she’ll tell Blacksad to come back later to talk about her relationship with Dunn.

Ask why Mary kept the relationship a secret, and about how Sonia felt about it — this will end the conversation.

Head back into the gym and use the phone to call the commissioner.