If you are a new player, someone that logs on sporadically, or if you are a long-time vet of Final Fantasy XIV, you’ve likely heard of the game’s recent “nerf” regarding the 2B outfit and the succulent booty reduction. Well, the producer of the game, Naoki Yoshida, came forth to explain why the well-known gift attached to the 2B outfit has gone flatter than fan interest in the latest Charlie’s Angels reboot; but thankfully 2B’s bountiful box of rear-beauty is now back to being fully featured due to patch 5.18.

Back on December 14th, 2019, people were talking about a much flatter 2B butt in Final Fantasy XIV, a discussion that made its way on to r/ffxiv and got at the attention of moderator Iluna Minori.

To set the record straight, Minori translated a wall of text that Yoshida wrote up regarding the 2B outfit booty conundrum as seen below:

“First of all, the methods of dealing with equipment in Final Fantasy XIV is actually complicated and it’s true that we tried to make it slightly curvier than before. Though we received a lot of comments about wanting a hip slider…well, it wasn’t easy to just implement one so we tried a workaround by doing so using equipments. However, when this particular equipment type in XIV is paired together, the ass would…umm how do I put this, according to the development manual is that how I’m supposed to put it…I wonder.. the shape? or the polygon…well yes the polygon…(omitted) will decrease or increase? So to use the word “shape transformation” here, it allows us to pluck and stretch (the polygons) it out and you can make it expands, or shrink it. This function is actually implemented automatically. It actually gets all equipment to work in a way whereby pairing this equipment with this equipment…rather this category type and when it’s paired together the shape will shrink while other combinations will display a different kind of result. But however, when we eagerly released the 2B equipment we didn’t actually set a flag onto it. What then happened was, when the player sits down, part of the equipment was supposed to change its shape and put their asses inside the coat/cloth, shrinking its shape to not allow the ass to stick out. That’s how we’re supposed to deal with it, but since we did not set a flag for it, it allow the voluptuous ass to actually remain the same for a part for the equipment, and it resulted in the ass sticking out when sitting. We received a lot of bug reports regarding this…so this is actually a flaw in our specifications here. Since it’s a mistake during checks, if we are to control our checks properly as we usually do, the ass would never stick out and our intention is to release the equipment where the shape does not change drastically when equipping the stick-out equipments. This was supposed to be specifications we’ve always adhered to but it ended up creating a combination within many equipment combinations where it changes the body shape of the player when it’s not supposed to. The players may have ended up in the situation when coordinating their glamours using 2B legging and liked it as a result. Though technology-wise it was done correctly, the unwanted state caused by the combination of equipments by the players ended up creating this situation, so we thought that there is a need to fully review this and test out if we should allow the shape to change for this category or not and this is something need to go through it completely once again. I think we need to since we see an increase in various types of equipment after running the game for quite a long while now.

Therefore, in order to do so we need to review our combination once again and this will take some time. That’s why we removed the flag for now even though we know the buttocks will stick out as a result of wearing certain equipments when sitting. and if we can make it we’ll restore it by patch 5.18. In the end, what I’m trying to say here is that it’s not a nerf and we didn’t do that because we want to. Therefore we’re reverting our settings back first and look into the specifications once again, and that’s what we’re going to do.”

Coinciding with the above translation, the social justice website Polygon reached out to Yoshida to learn if the booty would be back sometime soon. And lo, the butt is due to come back on December 24th:

“Yoshida noted that this “nerf” is temporary. The bigger butt deployed without the right parameters set, so it wasn’t hidden when players sat down, which caused issues. Yoshida acknowledged that players want butt sliders added to the character customization in the game and considered this equip as a way of delivering that. He said that development team is working on a fix, and players will have their large 2B butts returned to them in patch 5.18, which is coming on Dec. 24.”

For comparison here’s the original plump butt and the “nerfed” butt for research purposes: 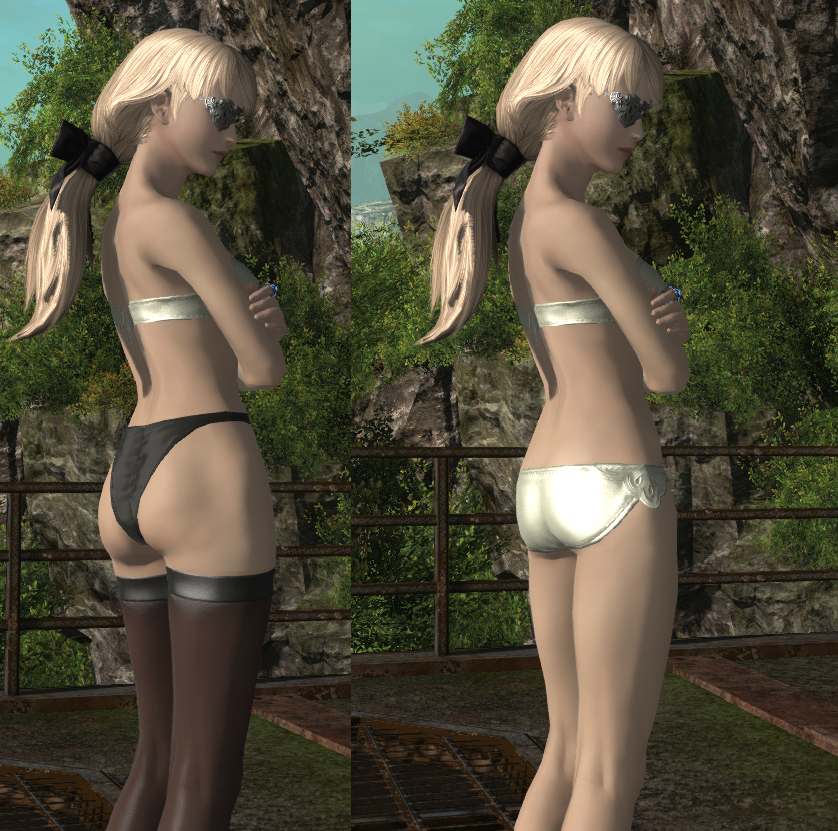 Do you see that plump butt on the left? Well, it is back according to reports as of December 24th, 2019. Over on finalfantasyxiv.com and r/ffxiv, the round mounds are restored.

Given that Yoshida is considering a butt slider and other adjusters that could make custom made characters extra spicy would seem like a step in the right direction. However, we’ll find out how things pan out moving forward and what sliders and options will drop when the devs behind Final Fantasy XIV have more to share.

Right now, the game is available to pick up on PC and PS4.