Jason Reitman’s Ghostbusters 3: Afterlife received its very first trailer and it’s nothing like what you might be expecting. Instead of trying to recapture the big-budget Saturday Night Live feel of the 1980s outings, or take a complete dump on the franchise like Paul Feig’s 2016 reboot, Reitman goes in a completely different direction with the film by focusing on telling a family-oriented story steeped within the Ghostbusters lore, specifically involving Dr. Egon Spengler’s lineage.

The first trailer for the film starts off like a Netflix original series, but then becomes a lot more familiar once Paul Rudd’s character is introduced and they attempt to wax nostalgia for fans. Said nostalgia-waxing actually caused the Social Justice blue-checkmark horde on Twitter to tizzy out in a conniption.

First and foremost, you can check out the two and a half minute trailer below, courtesy of Rapid Trailer.

Now the film doesn’t look entirely to be pozz-free. Keep in mind that early on they try to push an interracial relationship, and the younger sister of the family seems to be the “smart” one.

However, the family is tied to the late Harold Ramis’ character, Dr. Egon Spengler, one-half of the brains behind the original quartet of Ghostbusters.

As pointed out in the comment section of the trailer, the film appears to pay an homage to Spengler’s character since Ramis passed away back in 2014.

I can’t say for sure how well this film will turn out but it feels a lot like a proper follow-up and tribute to the Ghostbusters legacy than what Feig rolled out back in 2016. It also seems to have a more serious tone to it than the previous films and comes across as some sort of a kid-adventure flick from the 1980s not unlike The Goonies, Invaders From Mars or Mac & Me.

Typically, the journalists who were pimping Feig’s film from 2016 — which went on to garner a spot on the Get Woke, Go Broke Master List — and who absolutely despise fans, heterosexuals, and white men, were quick to use their social media clout to flail words at fans like a torturer whipping the naked back of a prisoner. 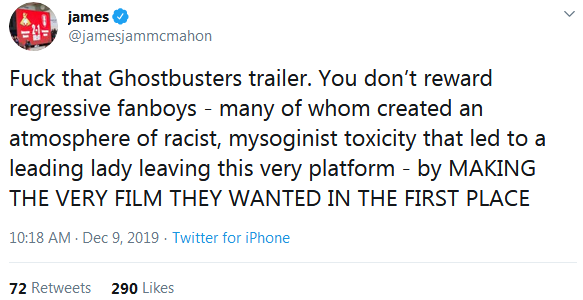 Editor-in-chief John Squires from Bloody Disgusting also jumped into the conversation, uninvited by fans, of course.

Today has been a reminder that talking about Ghostbusters on the internet has become a really, really bad idea in recent years. It seems the fandom may never truly bounce back from one movie starring women that was neither bad or good enough to have inspired so much division!

Then there were the typical anti-fandom spergs with their thousands of followers and infinitely insufferable remarks chiseled out of snide antipathy.

The 2016 Ghostbusters was a pretty god damn good movie, and it’s a pity so many people decided they’d hate it long before they ever saw it. Also Holtzmann. <3 pic.twitter.com/bybPfCmhtn

i think they should stop making nerd movies for like 20 years. no more star wars, marvel, DC or ghostbusters. i think we all deserve some peace.

The funny thing about it is that we still don’t even know if this third canonical outing in the Ghostbusters franchise will even be good. It could be filled to the brim with the typical trappings of Liberal-laced propaganda that keeps the white-powder puffers and surrogate-sugar snorters on the high horse that they ride to the fart-sniffing gatherings known as award shows.

Even Tim Pool called out the journalists for dropping spaghetti all over social media regarding Ghostbusters 3: Afterlife.

Judging from the tweets made by the Social Justice clique one would think that the Ghostbusters 3: Afterlife trailer was some sort of star-studded filled smorgasbord of throwbacks and feel-good memories involving the original cast and Ray Parker Jr’s iconic theme song.

Even still, a moment to englut on the schadenfreude of blue-checkmarks flinging digital feces at fans so early into the promotional lifespan of Ghostbusters 3: Afterlife is a moment not worth missing.

No comments yet Categories: News, Trailers Tags: Ghostbusters 3: Afterlife (2020), Movie, SJWs
← Twitter Silent Regarding Suspending Andy Ngo For Posting Facts About Transgender Homicide Rates
Overwatch Movie Or Cartoon May Be Possible In The Future, According To Jeff Kaplan →