[Update 12/16/2019:] Hallmark has announced that they have bent the knee and will reinstate the lesbian Zola ads after Twitter hordes pressured them to support Zola’s propaganda. Hallmark also claimed they are “diverse” and “inclusive” and will be working with GLAAD in the future for their programming.

[Original article:] You can’t go anywhere without being served a hot, steaming bowl of alphabet soup. It’s shoved down your throat when you go to the loo; it’s there when you’re trying to watch certain streaming shows on Russian websites; it’s there when your girlfriend is picking up tampons from the local mart; and it’s there when you’re trying to eat at a local restaurant and just enjoy some hot, mouthwatering, fried sausage. Heck, it’s even there on the Hallmark Channel! Well, it was… until they axed it and then a bunch of the Rainbow Reich came out of their contemporary San Francisco pads to start a Twitter trend to boycott Hallmark.

It started with an ad featuring a lesbian wedding where two women kiss. Hallmark displayed the ad from Zola on their channel, which you can view below.

The ad triggered the One Million Moms group who petitioned Hallmark to remove the ad from the channel.

However, Zola got triggered by Hallmark removing the lesbian ad from their channel and not the hetero ad, so they told The Hollywood Reporter that they were removing all of their ads from Hallmark, with Zola chief marketing officer Mike Chi saying…

The Rainbow Reich wanted to end Hallmark, so they started rallying the spergs on Twitter to get #BoycottHallmark trending. 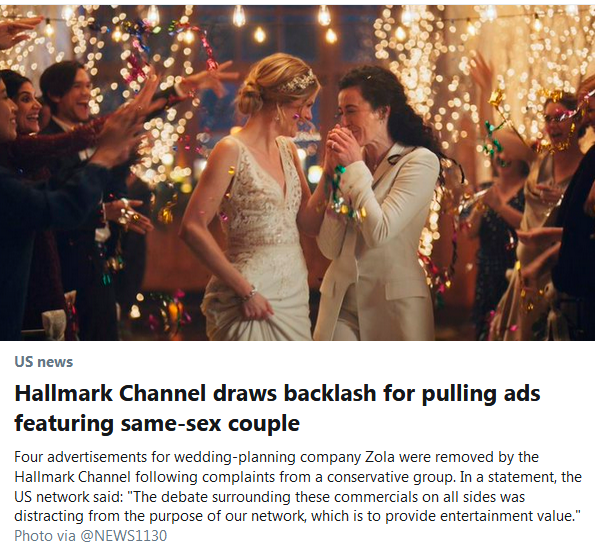 All manner of Regressive Leftists have spilled out of the woodwork like pedophiles emerging from the bushes on Epstein Island.

Leading the charge was GLAAD, who called Hallmark’s move “hypocritical” and “discriminatory”.

“The Hallmark Channel’s decision to remove LGBTQ families in such a blatant way is discriminatory and especially hypocritical coming from a network that claims to present family programming” @sarahkateellis #BoycottHallmark https://t.co/P0v03xfAe4

We have a zero tolerance for those who support hate. Period. #boycotthallmark

Chairman of the Democratic Coalition and former campaign chair for Barack Obama, Jon Cooper, also virtue signaled his support to boycott Hallmark over their decision to pull the Zola ad.

I married my husband in 2009, and we raised 5 children together. The ⁦@hallmarkchannel⁩’s decision to cave to pressure from homophobes is very sad. Until they affirm the equality of LGBTQ families, we will #BoycottHallmark. LOVE MAKES A FAMILY. ❤️ https://t.co/IYmEQiF39Q

Married to a man with five kids?

I hope the FBI is investigating.

The most telling tweet, however, is from Mrs. Betty Bowers, who boasts more than a quarter of a million followers on Twitter. She attempted to use the argumentum ad populum excuse to shame Hallmark and censure them for removing the ad with a tweet posted on December 15th, 2019.

Well done, @hallmarkchannel! You got #boycotthallmark trending because you caved to “One Million Moms.”

FUN FACT: “One Million Moms” added <300 followers in the past 3 years and still doesn’t have 4,000 followers. It’s probably some dude sitting at a card table in his undies. pic.twitter.com/v7r06Yu0sa

What Bowers fails to realize is that Hallmark’s demographic aren’t the sperglets who ruin social media and inundate people with a deluge of rainbow colored propaganda.

According to Broadcasting Cable, Hallmark Channel managed to beat out other channels during the 2018 Christmas season with their line-up of holiday themed content, managing to score big with the heterosexual holiday romance film, Winter Castle, which totaled 3 million viewers and captured a strong demographic retention rate among the female 18-49 demographic and the female 25-54 demographic.

Simply put, One Million Moms may not have much presence on Twitter, but they likely represent the more tangible viewing demographic for Hallmark Channel’s content. In fact, it’s likely that the proposed boycott by the Twitter degenerates will have a negligible impact on Hallmark’s ratings.

Furthermore, using Twitter followers as a way to dismiss the One Million Moms completely misses the point that Hallmark was likely reacting to people who actually watch the channel, and not the virtue signaling posers like Betty Bowers and Jon Cooper who only noticed that Hallmark existed after it began trending on Twitter.

What’s more is that it’s funny how Hallmark Channel is a privately owned corporation, and they can exercise what they air and what they don’t. Yet in this case you have all these Leftists and Centrists™ coming out of the woodwork to denounce Hallmark’s decision to stop airing a Leftist ad containing the kind of propaganda Leftist want to foist onto the American public.

It’s interesting because these exact same Leftists and Centrists™ are quick to justify Valve and Sony forcing their censorship polices on third-party games, using the excuse “They’re a private corporation and they can do what they want!”.

Much like in the Arthur case where an episode was banned in two states, you’ll find plenty of Regressive Leftists, Liberals, Democrats , and Centrists™ clamoring to attack the censors, but they won’t lift a finger when the gamers, anime fans, and weebs suffer through the same kind of censorship of video games, anime, and manga. 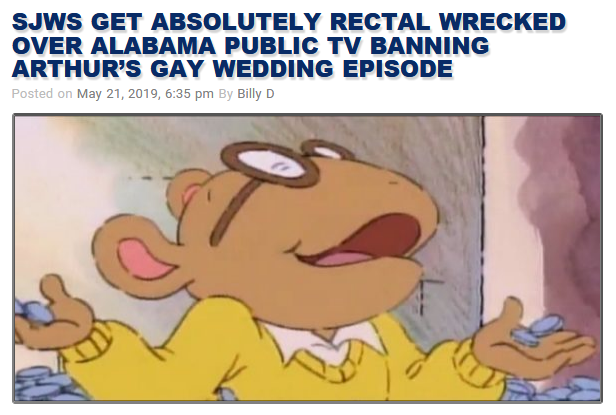 These hypocrites will constantly flap their gums about “marginalization” and “oppression”, but in reality they’re a-okay with all sorts of censorship so long as it falls in their favor. They enjoy canceling people who have opinions that don’t align with them or media entertainment that offends their fragile sensibilities.

Now watch as all the Centrists™ go out of their way to justify why the alphabet soup slurpers are justified in boycotting Hallmark Channel but in the exact same breath defend why gamers are wrong for boycotting Sony or Valve for censoring games made by third-party development studios.