Square Enix had updated their terms of service back in February of 2019, making it known that you could be punished, actioned, suspended, or banned from Final Fantasy XIV based on off-site behavior that violated the terms of service. Those of us who have been consistently warning the general public about the ever-increasing regulations of a draconian corporatocracy knew that eventually this kind of policy would be used in an abusive way, and recently it has.

Twitcher streamer Arthars was temporarily suspended for ten days, from December 18th, 2019 to December 28th, 2019, for violating Square Enix’s terms of service for Final Fantasy XIV based on off-site behavior.

MMOs.com did a very brief summary of the story, reporting that Arthars criticized a Black Mage in his party for his piss-poor 7000 DPS output, and berated the player on-stream, but didn’t do so using Final Fantasy XIV’s in-game chat.

The original livestream where Arthars berated the player took place on December 8th, 2019. It consisted of Arthars using ACT software to showcase the DPS of the Black Mage, call him out by his player name, and use sound clips of a crowd booing to really hammer home the point that scrubs shouldn’t be grouping with high-level Twitch streamers in party-based games like Final Fantasy XIV. 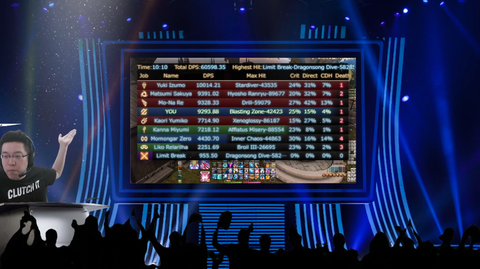 However, after the story made the rounds on Japanese gaming blogs on Livedoor, specifically Fmato14’s blog, which garnered hundreds of comments and thousands of views after the clip went viral within Final Fantasy XIV gaming circles, a Game Master for Square’s MMO contacted Arthars in-game on December 18th, 2019, and informed him that he would be suspended for ten days and would be required to delete the offending stream and all of the associated clips.

Unfortunately all the clips and videos of the incident have been erased, but the Final Fantasy XIV sub-reddit captured an image from the stream where Arthars was handed his suspension and the conversation that he had with the Game Masters where they explained his suspension, which you can view below.

“Greetings Arthars Waifu. I am Game Master Lydahkny. I would like to start by apologizing for interrupting your game play at this time. However, I have brought you to Mordion Gaol to discuss a matter in which you have violated our Terms of Service.

“Unfortunately, evidence was found of you saying slandering during off-site streams, which is a violation of our Rules and Policies.

“[…] Unfortunately, I am unable to divulge any details spreading any investigation that we conduct.

“[…] Due to this violation, we will be issuing a suspension to your account. You will be able to log back in on 12/28/19 at 00:00. However, please be advised that any future violations of our Rules and Policies may result in a lengthier suspension or if need be a Suspension with review for account termination.

“We will kindly ask that you take the video in question down as well.

“[…] If the video is not taken down, you will receive a more severe punishment.”

So to recap, Arthars said some mean things on stream about a pathetic player in his party during a dungeon run in Final Fantasy XV. Arthars was reported to Square Enix support staff by weak-willed people who saw the stream. The support staff suspended Arthars and also demanded that he delete the videos and clips lest he be subjected to an even more severe punishment.

So this is why there’s no longer any evidence of Arthar’s comments, even though the stream itself was happening completely outside of Square Enix’s domain. However, as linked in the Reddit thread – where a bunch of pro-censorship, pro-corporate boot-lickers came to Square’s defense – Square does mention in their terms of service that you can be sanctioned for off-site behavior.

In the user agreement it states…

“In addition to the License Limitations, there are other activities that you are forbidden from doing in connection with the Game (“Prohibited Activities”). In its discretion, Square Enix may use a variety of methods to deal with violations of this User Agreement and the Prohibited Activities […]”

If you click over to the Prohibited Activities page, it lists all the actions that could net you a sanction, which includes all the typical trappings under headings such as “Harassment”, “Nuisance behavior” or “Offensive Expressions”, the last of which Arthars violated.

This is becoming a common inclusion in various terms of service policies for larger corporations. Blizzard Entertainment, for instance, made it where they can ban you from their games for off-site behavior, along with Twitch.tv.

Expect to see this list grow as more tech companies embrace draconian measures of censorship to control how you behave, what you say, and how you’re allowed to act, even when you aren’t using their services.

——————-
TL;DR: Twitch streamer Arthars got temp-banned from Final Fantasy XIV for berating a crappy player on Twitch for not doing his part and not carrying his weight as a Black Mage. A bunch of butthurt pieces of crap reported Arthars to Square Enix’s support and the presumably paid-in-Hot Pockets Game Masters temp-suspended Arthars for berating another player on Twitch, thus enforcing Square’s new Terms of Service policy where you can be actioned in-game based on off-site behavior.

(Thanks for the news tip DosonTheGreat)