Twitter has been silent after reports came out verifying that gay journalist, Andy Ngo, was 100% correct in his statement about the homicide rates of transgenders versus other demographics. He mentioned that they were a lot lower than those who were non-transgender, but Twitter unceremoniously had his account suspended for posting that fact. After his statements were fact-checked and Twitter was asked to respond for taking actions against Ngo for posting facts, the corporate giant decided to plead the Fifth.

KotakuInAction 2 picked up the news from the Washington Times, who reported that Kentucky State University associate professor, Wilfred Reilly, crunched the numbers himself and found that transgenders account for an absolutely minuscule amount of homicides in the U.S.

“Kentucky State University associate professor Wilfred Reilly found that the 2017 homicide death rate for transgender people was about 1.48 per 100,000, less than a third of the overall murder rate of about 5 per 100,000 and a fraction of the rate for men in general (6.68) or black people (18.8).”

This was followed up with quotes from Reilly, who went on to tell the Washington Times…

These facts fly in the face of Twitter’s decision to suspend Andy Ngo for posting the same facts after the Human Rights Campaign proclaimed that the transgender deaths that occurred in 2019 were an “epidemic”, as noted in their report that was published on the HRC website.

The New York Times, not remiss in taking an opportunity to exploit Liberal Progressive propaganda, jumped on the bandwagon and also ran a headline on September 27th, 2019 that read “Quotation of the Day: 18 Transgender Killings This Year Raise Fears of an ‘Epidemic’”.

Journalist Andy Ngo refuted these claims made by activists by posting that the transgender murder rate is lower than the rest of the general population. 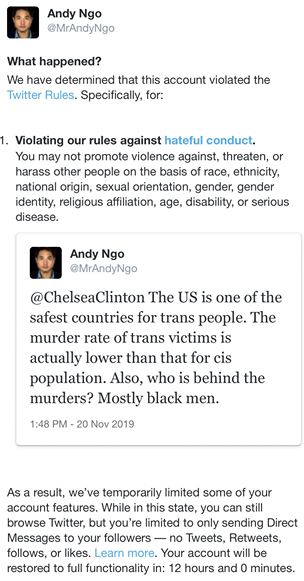 The suspension came after multiple Left wing outlets and terrorist adjacent activists, including Its Going Down, lambasted Ngo for making the tweet, with disinformation running rife within their articles, including running headlines like “Andy Ngo Is Wrong About Trans Murder Crisis”.

After the Washington Times fact checked the claims being spread around by Left wing propagandists, they circled back around to Twitter for a comment, since it seems like the ethical thing to do.

However, Twitter opted out of commenting about suspending Ngo for posting the facts, with the Washington Times reporting…

Andy Ngo, however, told the Post Millennial that this has a chilling effect on those who value facts over fiction, and that the platform is essentially engaging in rewriting history to suit their agenda rather than what’s real…

“Twitter’s decision to force me to accept a false reality in order to use its platform is chilling to those who value truth above dogma, as uncomfortable as the truth may be. The dogma of our day is the trans ideology — an authoritarian worldview replete with science and evidence denial.”

Eventually the journalist managed to get his account back by deleting the tweet and accepting Twitter’s version of their “truth”.

Nevertheless, while Ngo may have been vindicated in some Right-leaning websites the reality is that there are countless more out there who are suspended or banned from social media sites like Twitter for posting the facts that disruptive their narrative.

(Thanks for the news tip KotakuInAction 2)