While most companies are constantly trying to nickel and dime their fans for every single cent that they’re worth via microtransactions, DLC, and loot boxes, TopWare Interactive opted to take a decidedly different approach to how they’re selling the 20th anniversary edition of Two Worlds. Specifically, the company’s limn for the re-release of the 3D action-RPG series consisted of selling gamers on the idea that this compilation pack is best acquired via a physical USB 3.0 stick.

The bundle package, titled Two Worlds Universe Edition, includes both previously released games along with all of the expansion packs and DLC that was made available for both titles.

The DLC included in the bundle contains the Castle Defense release, along with the season pass that came with Shattered Embrace, and all of the digitally exclusive content from the deluxe edition, such as the additional weapons and the game’s soundtrack… although, it would be packed onto the USB stick instead of a compact disc. 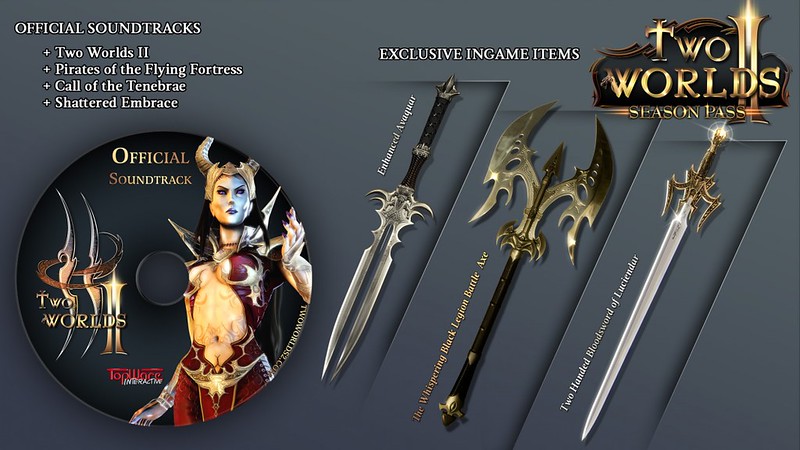 One thing worth noting is that all the chicks in the promotional images are baring midriff, cleavage, and sporting sizable busts.

It’s a far cry from an era long gone, back when Western developers weren’t afraid to make sexy women, and when the facial scans for the female characters didn’t turn them into butter-faced, post-op looking trans men.

It’s still a shame that the social engineering from developers these days has made it where their attempts to etiolate male sex drives has resulted in nearly every new game containing butt-ugly, unattractive, Progressive Liberal-looking women.

But Two Worlds Universe takes us back to a time where men were men, women were women, and there were only two genders.

As for the games… they were pretty much like your typical medieval-fantasy titles on PC, similar to the Gothic series or Kingdoms of Amalur.

I’m curious if more companies will release (or re-release) their games via USB stick? It’s a neat little alternative for physical collectors and bypasses the restrictions and limitations of digital distribution, such as DRM or relying on publisher servers for software access. Anyway, at least TopWare is experimenting with different options.