If you’ve opened up Steam recently you may have noticed that there was an off-putting affront to all things gaming in the form of the Winter Sale’s mascot, Mayor Carol. It turns out that Carol comes from an artist who belongs to the loud minority that seems to be taking over every aspect of media despite making up a minuscule fraction of the consumer market.

We’ve been receiving e-mails and comments about Mayor Carol. I didn’t pay much mind to the character since I haven’t glanced at Steam’s store page much, nor have I really taken a look at the Winter Sale due to having an already expansive back catalog of games I’m slowly trying to work through.

However, upon further inspection it became obvious that the character was pure propaganda from the Cornhole Commissars. 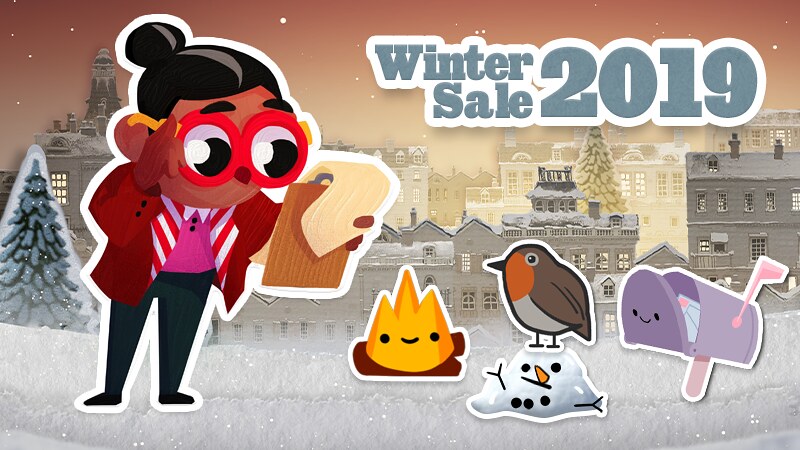 The character is a mannish looking black female (because of course) who has an overweight body of an androgynous nature, and is wearing gender-neutral clothes.

Red flags and warning bells should have gone ringing off for anyone who isn’t completely converged by the deluge of Leftist degeneracy that has flooded the media market over the last half decade.

Of course, it took just a little bit of digging from gamers who suspected Valve had ulterior motives with the character to find out that the artist claims to be “non-binary” trans.

On December 21st, 2019 Syd Weiler posted up a tweet indicating that they had been contracted by Valve to create a character for the Steam Winter Sale.

HEY SO, @valvesoftware approached me to create a character and some stickers for the @Steam 2019 Winter Sale. Meet Mayor Carol! 🎁📝🌟

These paintings were for her ‘Holiday Quests’ list page – https://t.co/dOAxEKGeKU pic.twitter.com/TZeGwXhPKu

(3/3) this one gets its own tweet because it’s maybe my favorite and most relatable animation I’ve ever done, pic.twitter.com/ZBUsEZJ9I3

Out of all the artists out there, Valve decided to go with someone who has pronouns in their profile and is constantly virtue signaling about things that don’t exist, like being “non-binary”.

In fact, just days before revealing that Valve had pegged them for the job, Weiler posted a long Twitter thread about being “non-binary”.

“Raise your hand if you are a part of the LGBTQIA+ community and might have figured that out much earlier had the childhood characters you projected onto been written clearly as such as well. I think about this a lot. What if Harry had been bi, & his teen crush on Cedric had gone unresolved? What if Ginny had been AMAB, & we saw Molly accept that she DID have a daughter after all? What if Luna had been genderqueer (or even openly accepted for her neurodivergence?

“Hypotheticals don’t help much now but I know that reading these perspectives in a world I trusted and adored would have helped me through SO much, and would have given me a rock to hold onto while drowning that cold sea of childhood confusion and self-hatred.

“I am not surprised by JKR’s comments. Just devestatingly and continually disappointed. Her ignorance hurts, and there’s no excuse anymore. Trans people are real, beautiful, valid – if you use your platform to denounce that fact, you don’t deserve that platform to begin with.

“I debated even starting this here, I’m sorry in advance if I delete – I’m scared to talk about this kind of thing publicly due to my history with online abuse, but to all my trans followers: I see you and I love you and I just wanted you to know that. Thank you for being here.”

Apparently Molly Carroll, who handles Valve’s business development, had a hand in bringing the artist on board. The character is also named after Carroll.

The former Chucklefish employee – and yes, it’s the same Chucklefish who apologized to mentally ill people on Twitter for having white voice actors portray POC’ers – has pronouns in her profile, which means she’s a Progressive Liberal, and seems to be a fan of extremist Alexandria Ocasio-Cortez.

[Update:] There was also an interview that Weiler had with Bobby Chiu back on November 14th, 2019, where Weiler basically labeled anyone who supported Trump, or visited 4chan, or 8chan, as “Nazis”. It’s time-stamped at the 31 minute mark, which you can view below. KIA 2 also pointed to some choice tweets where Weiler makes their racism pretty blatant.

One should definitely ask why Valve was okay hiring in an anti-white artist? One should also ask if they would have also hired in an anti-black or anti-Mexican or anti-Semitic artist, or if anti-white racism is the kind of racism they’re okay with? But I digress.

Let’s wrap this up.

The moral of the story is that Valve is converged.

They could have hired any number of artists out there, especially artists who are actually talented… like the ones they discriminate against from Asia. However, they chose to go with someone who needs to seek psychiatric help. They decided to pad the delusions of mentally ill people, and foist on their audience the same delusions that the people on Twitter suffer from.

Anyone claiming to be something that isn’t real, needs help.

“Non-binary” does not exist. It’s not rooted in biological reality. You can either get pregnant or impregnate, but everything outside of that is a genetic defect.

It’s unfortunate that Valve – being located in one of the places that proliferates the Liberal Progressive agenda – is succumbing to these irrational sociopolitical principles that lead nowhere but to the destruction of society.

One would think that Gabe Newell would want to nip this kind of behavior in the bud before it completely overtakes and destroys everything he built, but maybe he’s at a point where he just doesn’t care anymore and he has enough money to buy all the doughnuts and Starbucks coffee to last him the rest of his potentially unhealthy lifetime.

(Thanks for the news tip tempestarcade)