Commandos 2: HD Remaster was released on Steam on January 24th, 2020. A lot of gamers who enjoyed the original isometric strategy game were quick to pick up a copy of the HD remaster only to find that the game had been seriously gimped and censored compared to the original release.

The current review scores for the game show that it’s “Mixed”, with majority of the negative reviews pointing out that the game has censored Nazi iconography as well as the Japanese Imperial flag. This includes pictures of Hitler, pictures of Nazis, pictures of the Swastika, and other such similar imagery.

“[…] The developers have imposed self-censorship in regards to Nazi imagery and refuse to either make new versions for non-German players or apply for Nazi imagery approval through the correct German channels (Which is readily available since 2018). All Nazi imagery is removed despite the advertisment that this is an authentic WW2 game. […]”

And that’s not even addressing the bugs, the animation glitches, and a few other issues that players have noted were either poorly functioning or not implemented correctly since the beta version of the HD remaster. This included the complete absence of the multiplayer co-op mode that was previously present in the original version of Commandos 2.

Gamers also took to the forums to confront the developers about the censorship, and on January 21st, 2020 one of the developers from Pyro Studios replied to a query about why the Nazi imagery was removed, writing…

“[…] there will only be one version of Commandos 2 HD Remaster internationally, and it will not incorporate any symbols, portraits, speeches or other assets that could break the law in many countries.

“As a company, we are obliged to adhere to the law, but we want our users to have the best experience with our games without causing potential delays or even being banned in certain countries.

“Therefore, we have decided on this course of action so that we will not be forced to split up groups of players or be unable to provide the game to specific regions at all.”

This is patently false.

There are no laws forbidding developers from including the Japanese Imperial flag in games. Additionally, Germany has also made it viable for content creators to include Nazi imagery in their products, with the USK having publicly announced back in 2018 that they would rate products on a case by case basis when they include Nazi imagery.

When pressured further by the forum goers as to which countries have laws in place that prevent the assets from appearing in the game, the developer went silent and opted not to respond.

Some users began linking to HD mods for the original Commandos 2, noting that it would be better and easier to simply mod the original game than purchase the butchered HD remaster.

The forum moderators retaliated by warning gamers that posting links to the other versions of Commandos 2 was an “Advertisement” and against the forum rules.

A few users shared images of the warnings they received from the corrupt moderators attempting to dissuade people from purchasing the uncensored version of the game, or accessing the HD mods for the original game, which is still being sold on Steam by the way. 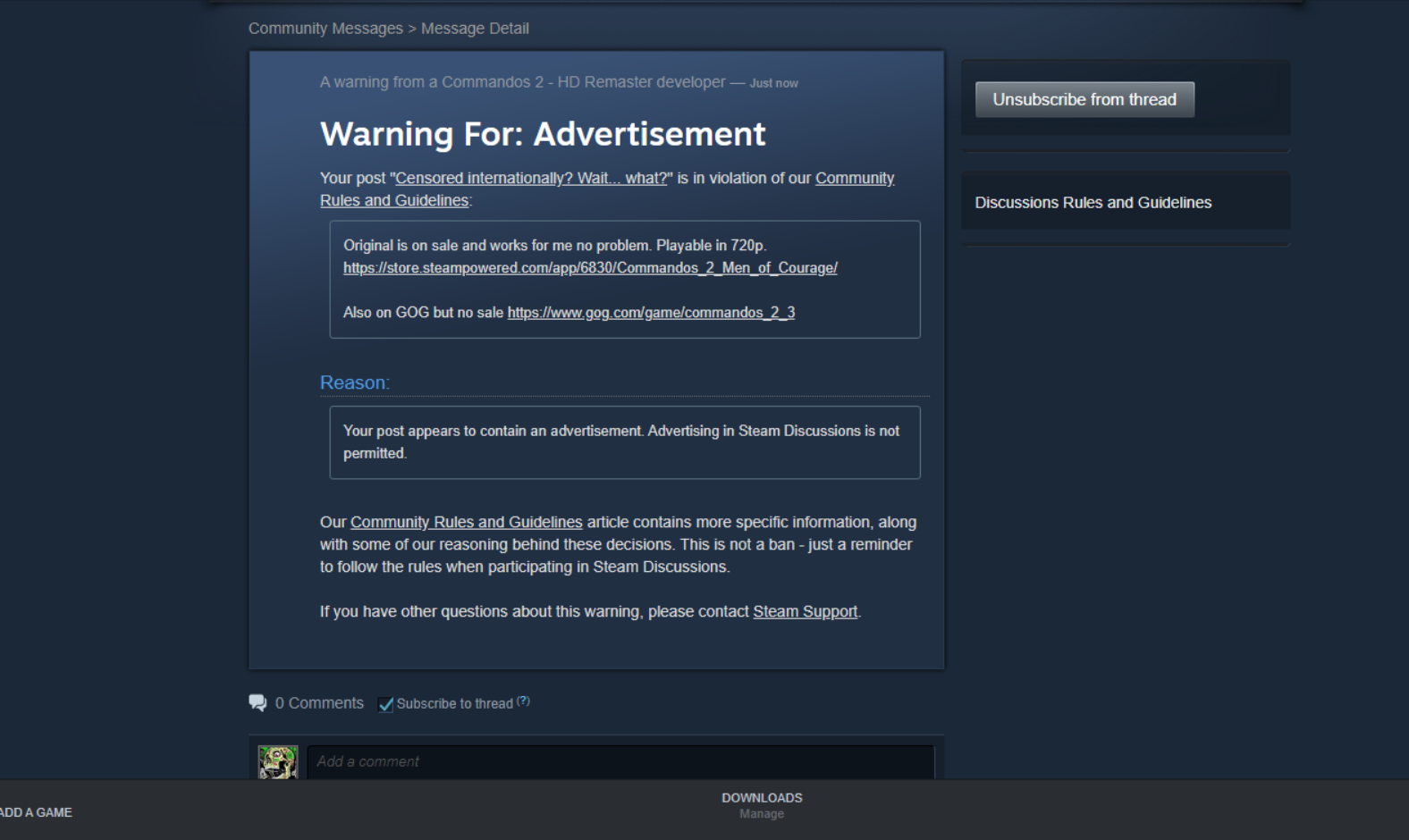 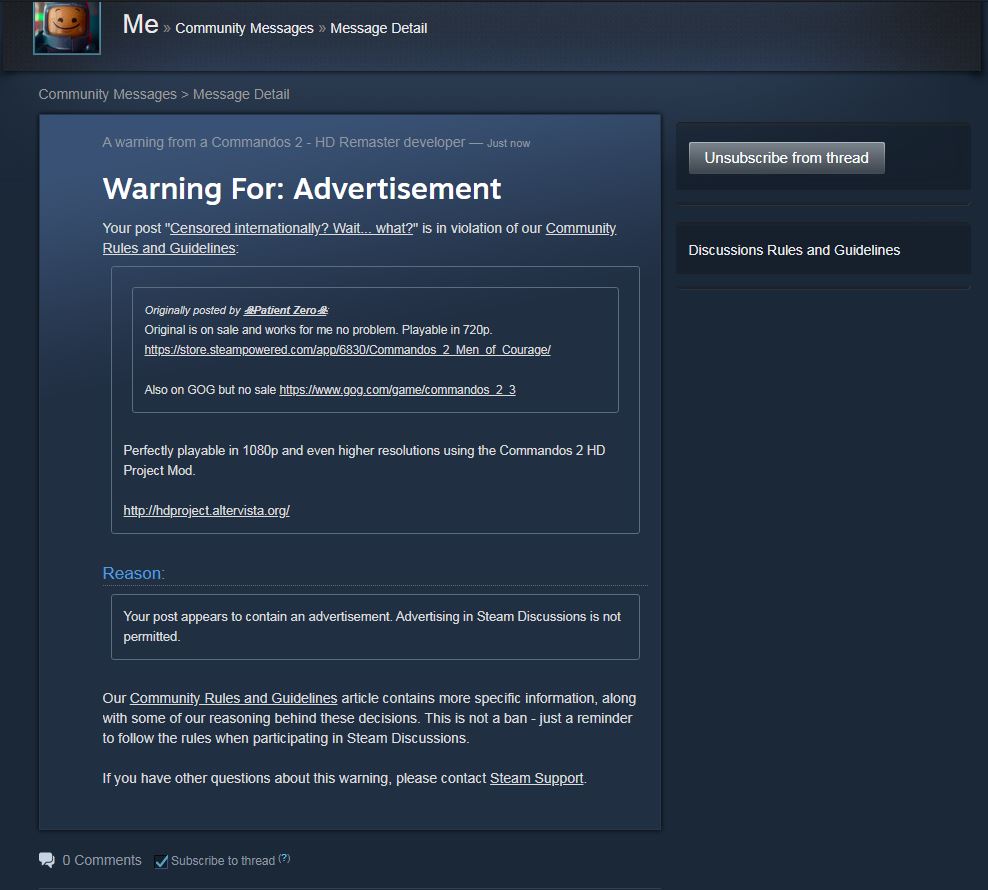 As stated in the forum, you can pick up a copy of Commandos 2: Men of Courage for just $4.99 over on the Steam store. During the Lunar Sale the game is marked down by 70% off, so it’s available for only $1.49.

To top it off you can get the HD overhaul mod from over on the Revora Creative Network.

Much like Battlefield V, one of the main issues a lot of people had with Yippee! Entertainment and Pyro Studios’ HD remaster is that they advertised the game as “authentic”.

The word “authentic” appears twice on the Steam store page. Once at the top discussing the scenarios, and again in the general description, which reads…

“Take control of an elite group of commandos who must venture deep into enemy territory and utilize their combined expertise to complete a series of notoriously demanding missions set in World War II. Go covert into various environments based on authentic World War II locations and lead your team of commandos against overwhelming odds, operate covertly and turn the tide of war.”

“Authentic” scenarios and locations would also mean that they replicate the aesthetic of those locations and scenarios, no? Because if you censor key identifying iconography from those locations then it’s no longer authentic. Sort of like adding a bionic woman to the frontlines of World War II.

Now some people complained that the developers also changed the class names, but they did slip into a Steam thread to clarify that the classes did not have their names altered. It’s hardly brownie points in the developer’s favor given that in that very same thread they conveniently ignore why the multiplayer co-op was removed and the other content censored.

(Thanks for the news tip Khro)