Recent tabletop developer Evil Hat Games opted to signal their virtue informing people that they are changing the Cthulhu mythos setting to make it more “diverse”, “inclusive” and less racist. If you are left scratching your head as to who Evil Hat Games are that is probably because outside this controversy they are nobody and will quickly fade back into a deeper obscurity after this controversy blows over. 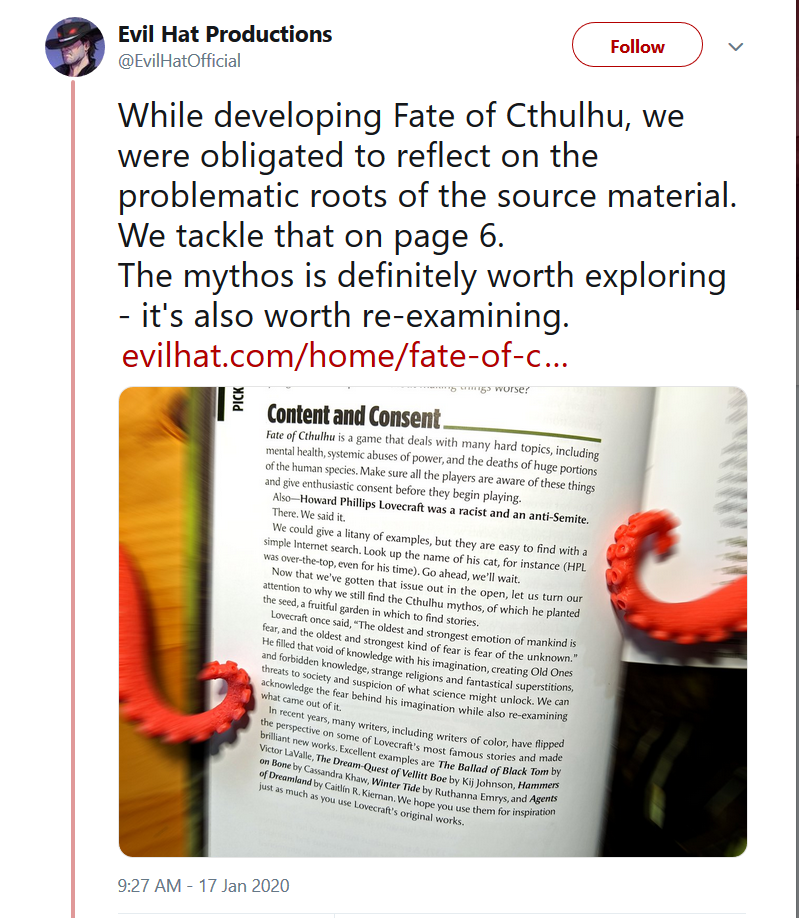 After making the tweet the thread was flooded with the usual group of virtue signalers who never go on to actually buy any products. Yet amongst the chorus singing “Stunning and Brave” was the actual customer base telling them to effectively get bent.

Apparently nobody really cares what an obscure company does with an open source IP that the wider Lovecraftian community is now going to ignore over the disrespect they pay to it.

“Lovecraft was bad mkay, but we’re still gonna use his works to make a profit”

Others dropped some sage advice that will sadly probably go unheeded by the majority of people.

And for the fools who think that’s ok, remember they will do the exact same to you in the future. What moral stance for you hold that will be evil 50 or 100 years from now. Think about the implications or live forever in loserthink.

Responding to those with money, Evil Hat Games decided to outright tell people that did not agree with their cultural revisionism and woke agenda to not purchase their product. A strategy that worked so well for Electronic Arts with Battlefield V when they told those against the woke progressive agenda to just not purchase their game, which resulted in the title under-peforming on the market.

Evil Hat Games would go on to demonstrate how much they are on the right side of history they are by pointing to the significant growth in metrics for the tweet. 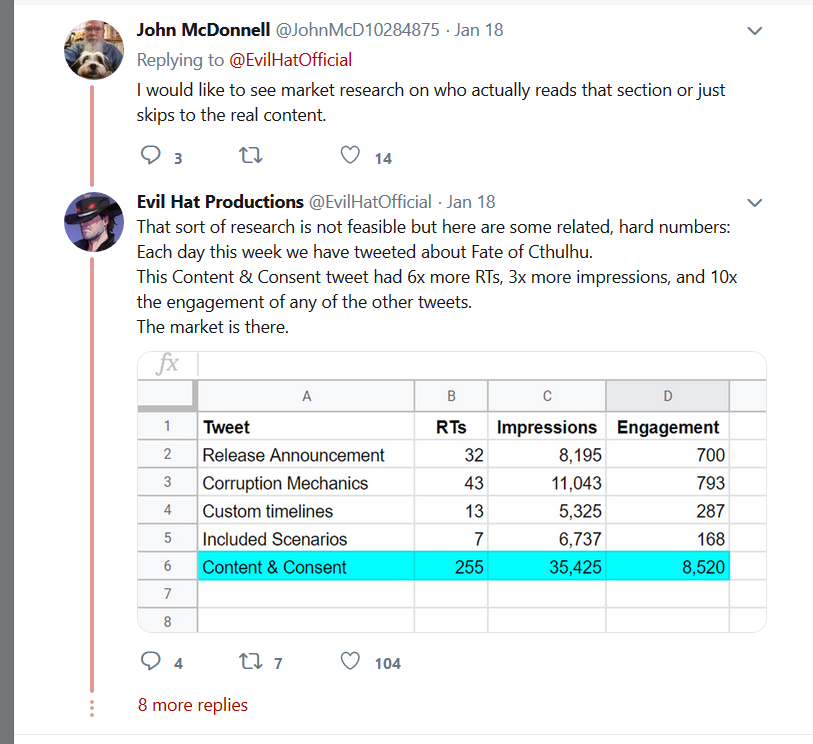 They also demonstrated in the process how they  possess a complete lack of understanding regarding marketing, or even the viability of social media marketing to drive a significant portion of sales outside word of mouth.

Many make the mistake believing “there is no such thing as bad publicity.” This is categorically untrue from a marketing standpoint. Bad PR cost companies millions and the aforementioned Electronic Arts goes so far as to budget extra marketing to counteract their bad image.

It would be more accurate to say: If you have a good product, but would receive no attention for it then there is no such a thing as bad publicity. Given that the publicity stems from a partially false, exaggerated, or otherwise insignificant complaint or originates purely from non-customers. This is what drives outrage marketing as it signal boosts products on social media and eventually the media who look to appear trendy with the current outrage mobs.

Telling people you are butchering the setting and to go screw off if you don’t like it is not an example that will endeavor the majority of people to support your product. Especially not from twitter, especially not when /r/game’s anti-gaming moderators are locking threads when they can’t control the narrative or discussion.

That they would think such a small volume of interactions was somehow significant or even vindicating for their virtue signaling demonstrates this company is already a nobody. Were they to simply remain silent nobody would even know of their passing, but now in a vain attempt at relevancy they will likely get the honor of being immortalized on the Get Woke Go Broke Master List .