After learning the hard lessons under Wolf Brew Games, Andrew Gilmour teamed up with Big Sugar, Steel Mantis, Merge Games, and Digital Uppercut to provide gamers with an uncompromising journey through the dark fate of the violent world of Valfaris for home consoles and PC, and this game absolutely knocked it out of the park.

When Andrew Gilmour of Wolf Brew Games introduced gamers to the heavy metal, Gothic, hack-and-slash side-scroller, Slain!, so many years ago it was obvious that he had a passion for video games and was willing to take gamers on a proper journey into the guts of hell with plenty of blood, gore, and hard-hitting weapons that felt impactful and visceral. Slain! kind of fizzled and died out when it launched, though, but not because of the concept; it was due to a lot of technical hurdles they didn’t overcome before release. Gilmour and the crew came back with Slain! Back To Hell, and it received a much better reception on home consoles and PC, thanks to having refined controls, quality art, and great pacing.

You can tell all of the hardships and lessons learned from Slain! carried over into correcting key issues with Valfaris, such as ensuring you could complete the game from start to finish without getting bugged out, or having challenging but workable controls to navigate the 2D world, and most importantly creating a well-paced adventure that’s both fun and rage-inducing.

The controls are pretty basic. You move and aim with the left analog stick. You can block or manually aim while stationary with the left trigger, perform a melee attack, shoot your primary projectile, and also fire off a special projectile. Oh, and you can jump. Really basic stuff.

Originally I wasn’t a big fan of the controls because I felt like aiming with the left analog stick was cumbersome and reminded me of the old Metal Slug games. However, I eventually learned to adapt to firing in different directions without much of a hassle later into the game.

Could things have been made easier with aiming being situated to the right analog? Sure, but if it works, it works.

The game follows prince Therion, as he returns home to Valfaris to find his planet adrift and ravaged with a cosmic darkness. Therion sets out to find his father, who he believes to be the one behind his home world becoming ravaged with monsters, mutant bugs, and cosmic horrors.

The first few stages are fairly simple, side-scrolling, run-and-gun affairs. I compared the game to the Sega Genesis title Doom Troopers, and that’s because there’s certainly a similar tone there with how the game is portrayed.

However, Valfaris has some very, very light RPG mechanics on hand.

Throughout your journey you’ll encounter items known as Blood Metal, which can be gathered and used to upgrade Therion’s weapons. You can acquire Blood Metal by either exploring the environment or killing certain sub-bosses.

There’s a limited number of Blood Metal scattered throughout the 10-hour adventure, so you’ll have to pick and choose which of the 19 weapons you you’ll want to fully upgrade.

Speaking of weapons… oh boy do they hit hard. You have a unique array of different pistols you can acquire, from railguns to blob cannons, to tri-shooters and flamethrowers. Each one can be useful for different situations and will sometimes be required to switch or swap depending on the enemies or section you’re in.

You also have a special weapon slot, which usually does lots of damage at the expense of energy. This requires a fine balance of using your melee weapon(s) to attack foes and gather up their energy to keep your special weapon capacity filled.

The special weapons range from heat-seeking missiles, to short-range shotguns, to a mini-gun, to an electric arc-caster, and a few others in between.

I’ll be honest, once I got a hold of the arc caster, known as the Bringer of Mayhem, it was the most reliable special weapon in the game save for when another weapon was required for a certain kind of boss.

One highlight to Valfaris‘ weapon cache is that all of the weapons seem inviting to use, and they’re all effective in different ways based on your play-style. In fact, the weapon catalog reminds me of the different elemental weapons and tools you had to acquire in Chakan: The Forever Man in order to access certain levels or areas.

Take note that Valfaris is not a Metroidvania. You can’t backtrack and if you miss something in an area, you’ll likely either have to restart from the checkpoint or restart the game. It’s punishing, but fair, and most times those willing to bite the bullet and suffer enemy hordes to explore will be rewarded with new weapons, Blood Metal, or the checkpoint tokens known as Resurrection Idols.

The Resurrection Idols are one of the cooler aspects of the game because it basically rewards players who are brazen enough not to use an idol to save their game at the altars with additional health and energy. As you progress through the game you can carry more and more Resurrection Idols, and you can either choose to sacrifice them to save your game, or hold on to them, which results in your life and energy bar being extended further and further.

There’s a huge risk/reward setup with the Resurrection Idols, which I think encourages gamers to go back and speedrun the game, or try different tactics. 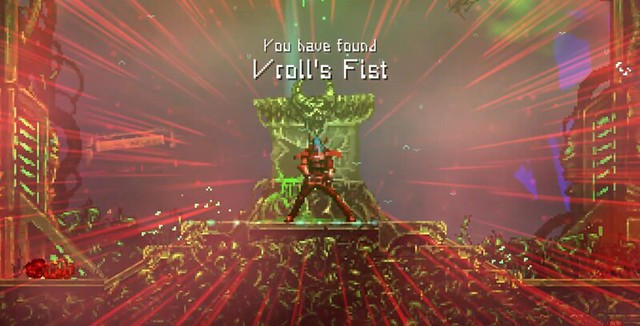 This isn’t to say that the entire game’s balance is perfect, because it’s not. There are some segments where enemies repeatedly respawn, so you don’t really have time to get your bearings. Other times you have to deal with the fact that not all enemy patterns stay consistent, so sometimes this can be used to throw you off any recognizable patterns, which can be annoying since Therion handles like a heavily armored badass from the 16-bit era, as opposed to the very nimble characters you get to play in games like Tenchu, Sekiro or Salt & Sanctuary.

I did sometimes get to the point of wanting to throw the controller at the wall, but usually if I modified my loadout and attempted to work within the recognizable patterns that were available, some of the more difficult segments became a lot more tolerable.

Now in the headline I talk about the game being “manly” and mention that it’s a game for “heavy metal fans”, I know this is kind of burying the lede talking about it so far down, but I wanted to get the basics out of the way before talking about why I was so drawn to this title.

A lot of the gameplay mechanics and handling feels like something right out of 16-bit era, especially games like Robocop Vs Terminator, Mega Turrican or Contra.

However, it utilizes a really cool, dark sci-fi fantasy theme that looks like it comes right off the heavy metal artwork for bands from the yesteryears such as Manowar, Warlock, and Iron Maiden. There’s also some cool inspiration from newer artists like Eliran Kantor or the artwork for some of Hammercult’s albums, such as Steelcrusher. 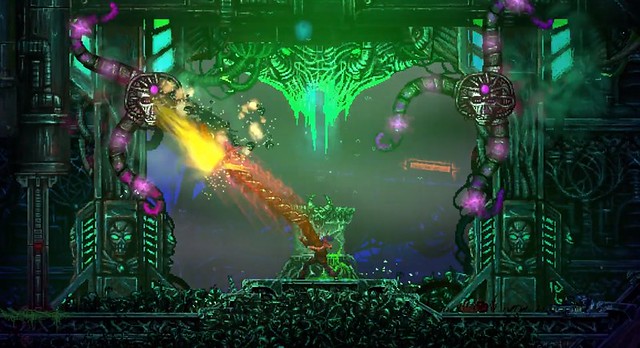 A lot of the environments and designs remind me of classic action games from the early 1990s, like DOOM, where there was a deep fascination between the horrors of hell and the advancements of science, and creating the illusion of experiencing something halfway in between. Valfaris manages to capture the essence of that aesthetic perfectly, and this leads me to Therion.

In a world ravaged by outer-dimensional terrors and horrific monstrosities from the other side of a dying star, one would think that most people would be terrified of such creatures… not Therion.

Much to my surprise, he’s portrayed as an absolute badass from start to finish. Heck, even when he jumps down from large platforms the ground trembles and shakes beneath his heavily armored feet. He reeks of being a larger than life alpha male.

His mannerisms and dialogue also reminds me of a chivalrous techno-knight in space who fears nothing.

I was really taken aback by this because so many games these days give us some of the most insufferable main characters; either they’re always second-guessing themselves, or steeped in self-doubt, or whining all the time, or unsure if what they’re doing is right, or constantly bogged down by moral dilemmas.

It was  doubly refreshing to have a main protagonist who was given a personality equivalent to the sort of hero we used to get during Saturday morning cartoons back in the late 1980s and early 1990s… only Therion isn’t afraid to rip, tear, and vaporize any and everyone that gets in his way. 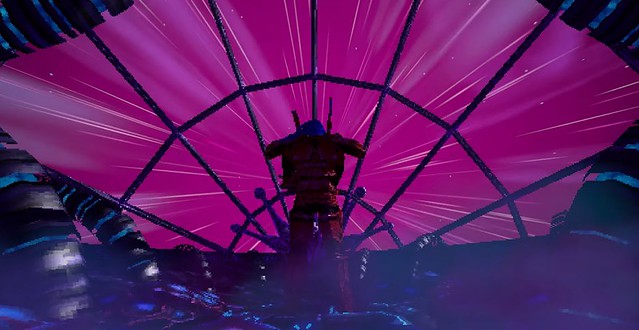 Therion’s journey is complimented with a testosterone-driven soundtrack put together by Curt Victor Bryant from Celtic Frost.

Hands-down, there were some tunes that would kick in and instantaneously it put you in the mood to flame the undead, electrocute the unclean, and cleave the infected.

Bryant runs the gamut of heavy metal styles, going from symphonic rock for the adventure segments, speed metal for when things get ugly and you need to channel your inner Doom Guy to eviscerate armies without prejudice, and doom metal to encapsulate your experience for when you’re moving through the decayed techno-hell structures that litter the ruined surface of Valfaris. Heck, there’s even some Gothic metal that kicks in while you stomp, crush, and inflame all beneath you in a skull-mech. 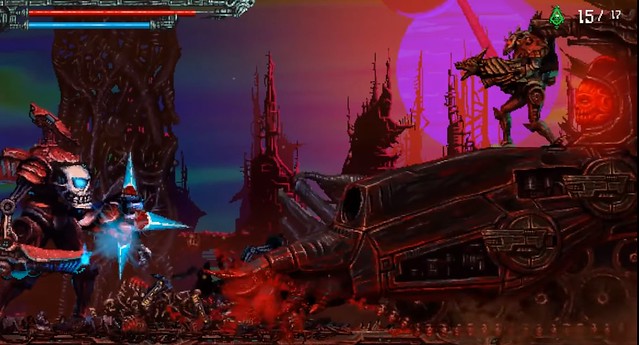 The music is melodic, thoughtful, and completely fitting for the fearless hero of Valfaris.

I thought just about everything about this game was done right and done well.

The ending sets itself up for a potential sequel, so hopefully Andrew Gilmour and Thomas Jenns are considering upping the ante with a second entry in the Valfaris series.

As far as tech specs go, the game uses mostly a lot of pre-rendered parallax assets for the foregrounds and backgrounds. Therion himself is also pre-rendered in 3D but rasterized for the 2D platformer. This helps ensure that the game retains the physics and maneuverability of traditional 2D games instead of the floaty, and oftentimes unreliable physics of 3D.

Valfaris has short load times on the Switch after an initial boot-up. The resolution is decent enough when in handheld mode but the visuals can look muddy when played in TV mode due to the internal resolution looking to be about 720p.

Overall, though, I had a blast with Valfaris. I purchased a physical copy from Signature Edition Games because I don’t trust digital distribution for as far as I can spit, and so far I haven’t had any problems with the game from a functionality standpoint. It’s well worth the purchase price for as far as I’m concerned, but that all depends on what you’re looking for out of a game.

If you enjoy unbridled hardcore heavy metal music with hard-as-nails gameplay, awesome dark-fantasy sci-fi themes and weapons that feel like they’re as devastating as they look, definitely buy Valfaris.