Western tech companies have imbibed so much on Soylent that they’re too far removed from the pathway of sobriety that is common sense. In fact, there’s practically no recourse for them at this point other than to follow through with their Soyism and leap right off the financial cliff into bankruptcy, because no matter how often their ideas net them an entry on the Get Woke, Go Broke Master List, they just keep trying. Gatebox’s Westernized version is a perfect example of this phenomenon.

According to a report from Engadget, an American tech company and some New Zealand developers took Gatebox’s anime-themed holographic assistant, Hikari, and according to Chris Velazco, stripped it of all things Japanese.

What they ended up with is a dull and uninspired looking rip-off featuring a bossy looking feminist in a purple pantsuit, and a douche bag personal training assistant who looks like he injected steroids into his jowls.

You can check out the near four minute spotlight below.

The biggest change is that all of the personal interactivity and charm that came with Hikari – who wasn’t just a personal assistant, but also worked as a friend to those who owned a Gatebox – has been stripped from the new Western version.

Cold, impersonal, ugly 3D characters are now used in place of Hikari, and there’s zero sex appeal or attractive qualities to the Westernized models they are using for the new version of Gatebox. I suppose that’s why they’re only planning on using them as concierges on cruise lines or as greeters at a gym. 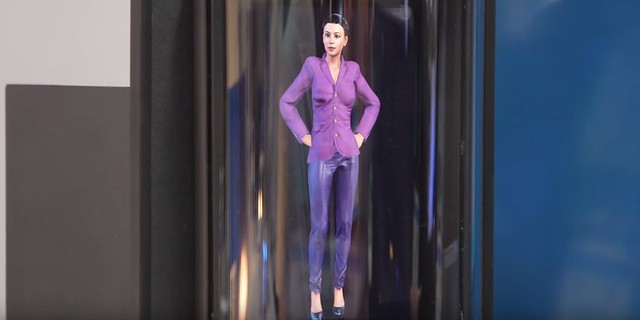 As you can see, the general design is all wrong.

Instead of being comforting and welcoming, they have a cold, stand-offish design for the female, making her appear like a typical Left-wing feminist that no one wants to talk to; follows Alexandria Ocasio-Cortez on social media; and spends all of her free time with her cats while complaining about President Donald Trump on Twitter. She’s also probably a lesbian.

In short, the design for the female assistant in the Western version of Gatebox is nothing short of a cancer-inducing wench.

It’s going to be hard to sell a product to a bunch of people with disposal income when the tagline is practically: “Free cancer. Get it here.”

It’s a complete 180 from the Gatebox’s design in Japan, which focuses entirely on attempting to get the user to feel as if they’re developing a bond with Hikari; allowing users to change her outfits, share personal information with her, and interact over miscellaneous activities.

It also helps that the Japanese version of Gatebox is a fully holographic design, where-as the upcoming Western version is just a flat 2D screen of a tablet inside of a Gatebox capsule mock-up. So not only are the 3D characters uglier, but the design is cheaper all the way around, too.

Anyway, Engadget is reporting that this Westernized version of the Gatebox will first roll out on cruises, but they don’t say which ones nor how soon we can expect to see them employed.

(Thanks for the news tip Plake Filmmaker)