[Original article:] The censorship train keeps on rolling through the station of content deemed “inappropriate” by the overlords of media. This time around it’s Interspecies Reviewers who is back in the limelight shortly after getting pulled from Funimation. Amazon Prime is the culprit behind the latest deplatforming of the ecchi-themed anime.

The show’s first episode was made available on January 11th, 2020 on Amazon Prime, as indicated by a cached archive of the Amazon Prime Video page captured from February 5th, 2020.

If you check the page now, you’ll see that Interspecies Reviewers has been removed from the Prime Video selection and is now listed as “unavailable”. 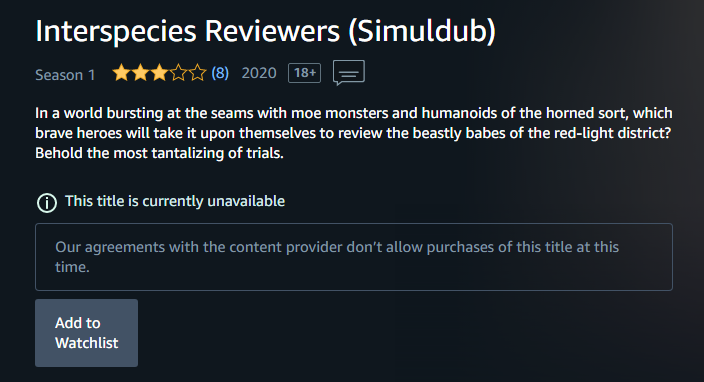 If you’re unable to read the image, it states…

“Our agreements with the content provider don’t allow purchases of this title at this time.”

As pointed out by Anime News Network, the manga series is still available to purchase on the Amazon storefront, but the anime stream is currently unavailable dubbed in English and it’s also unavailable in Japanese with subtitles.

This comes shortly after Funimation pulled the series on February 1st, 2020.

Typically there’s a domino effect when major distributors start pulling support for a product. Don’t be surprised if other streaming services also pull the show as well.

AnimeLab recently boasted that they still have the show available on their service, but they only offer streams to those residing in Australia and New Zealand. That’s also not to mention that they’re a subsidiary of Sony, along with Funimation, so it’s still possible that if Sony wants the anime off of AnimeLab they can very well pull some strings to make it happen. Given their PlayStation Censorship Policies it’s not far-fetched that we could see them making such a move.

For now, distribution platforms are taking every opportunity to remove Interspecies Reviewers, further proving that censorship is steadily increasing and will continue to increase as the Regressive Left usurp all forms of media you used to enjoy.