Action Squad’s Unity 3D-powered isometric RPG, Iron Danger, has secured a March 25th, 2020 release date on Steam for PC. The game also recently received a new trailer highlighting how the time manipulation mechanics work and some of the enemies you’ll face off against.

The story is interesting but the main character certainly isn’t. You take on the role of a young village girl named Kipuna, who is a “sharp-witted” adventurer who is granted the magical ability to manipulate time and stave off death. She’s thrust into a conflict between the great city of Man who rebelled against the gods, known as Kalevala, and a witch queen leading a violent army against the city from the north.

Now if this were a game made at any point before 2012, I would probably be excited. However, in [current year], nearly every female protagonist (save the one from Innocence: A Plague Tale) has been either insufferable or hewn out of feminist tropes based on Anita Sarkeesian’s poisonous propaganda. 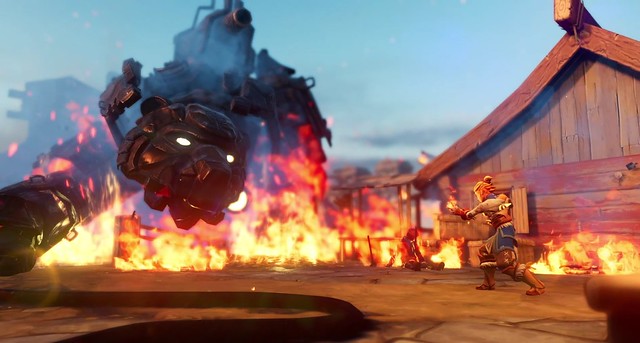 Kipuna, for instance, looks like a pubescent boy and only barely sounds like a girl. Her androgynous design reminds me a lot of Netflix’s She-Ra and the Princesses of Power. In fact, if I didn’t tell you that in the main header image above that was a girl, you would most likely assume it was a boy, especially since she’s covered from head to toe, wearing male armor, and is shaped like a male. For all intents and purposes, other than her voice, she’s practically a male. Most Centrists™ will probably hand-wave it away but in [current year] it’s a definite red flag for a real gamer like myself.

Couple the man-faced female lead with Daedlic Entertainment’s stance on the refugees flooding into Europe, and one can easily see how this might be a title worth avoiding for the corporate politics alone.

The actual gameplay, however, looks promising.

It’s a real-time tactical RPG where you get to pause battles and rewind five seconds before the previous moment, allowing you to avoid certain death or retry different tactics on different foes.

Elemental effects can also affect enemies, such as fire or ice. And you’ll have to mix-up and mess around with different abilities in order to take down larger foes, like the mecha-bear.

Some of the enemies certainly look cool, and the mixture of time manipulation and real-time tactical combat sets the game apart from most other CRPGs on the market.

However, I can’t get past the androgynous heroine, and usually that sort of “strong, witty female” trope is accompanied by her being a lesbian, which is all the rage these days.

Conceptually, though, Iron Danger seems cool but I’m getting those ringing vibes that echo a noise equivalent to a danger alarm.

If you’re interested in Iron Danger, you can learn more by visiting the Steam store page ahead of its March 25th release.