Saber Interactive announced that the definitive edition of MX Nitro is currently available in the form of MX Nitro: Unleashed. The motocross racing title is making its debut for the first time on the Nintendo Switch, while also re-releasing on PS4, Xbox One and PC, all for the low, low price of just $9.99.

The best part about it is that the game is available on participating digital distribution services, so you’re not locked into only purchasing the game from the Epic Games Store due to any timed exclusivity deals, something that Saber Interactive has been dabbling into in recent times.

The best part about the news is that if you already own a copy of MX Nitro on any of the platforms where the game was previously released, you can upgrade it to the Unleashed versions of the game for free.

That’s a rare treat for consumers.

I have to say that this game originally slipped under my radar. But it looks and plays like it’s a throwback to the 1990s era of extreme sports titles that dominated the PSX and N64 at the time.

While most of the motorcross or supercross games being made by companies like Milestone and Kylotonn Racing Games are focused on realism and capturing the nuances of motorsports physics, Saber Interactive seems to have gone in the opposite direction, taking a more SSX Tricky approach to motorbikes by filling out a 40 hour campaign with bosses, wild stunts, and all new tracks bringing the count up to 40. 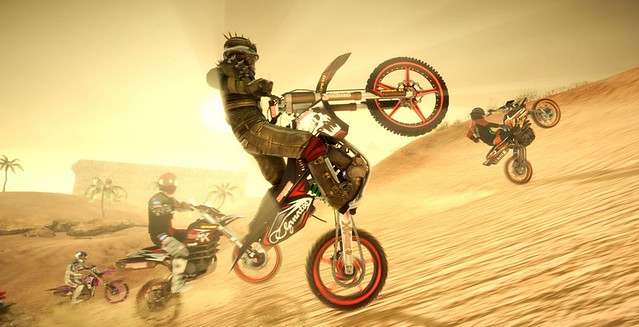 If my back catalog wasn’t so large already I would be compelled to pick up a copy. Even still, if you have a Nintendo Switch and are constantly traveling on the go, it might be a good idea to grab the game if you find yourself having a lot of downtime where the portable feature could really come in handy.

You can grab a digital copy of the game right now for PS4, Xbox One, Nintendo Switch or from over on the Steam store for PC.