Weekly Shonen Jump and the author of the manga My Hero Academia have issued apologies for the reveal of one character who was named Dr. Maruta Shiga. They were bombarded with complaints that the name was insensitive due to the history of the word “Maruta”, and so it was publicly stated that the character’s name would be changed in response to complaints from Social Justice Warriors.

Using the hashtag #Apologize_Horikoshi, Chinese, Koreans, and some Westerners bombarded Weekly Shonen Jump and author Kohei Horikoshi with demands to apologize for naming the villain Maruta Shiga, and to change his name. 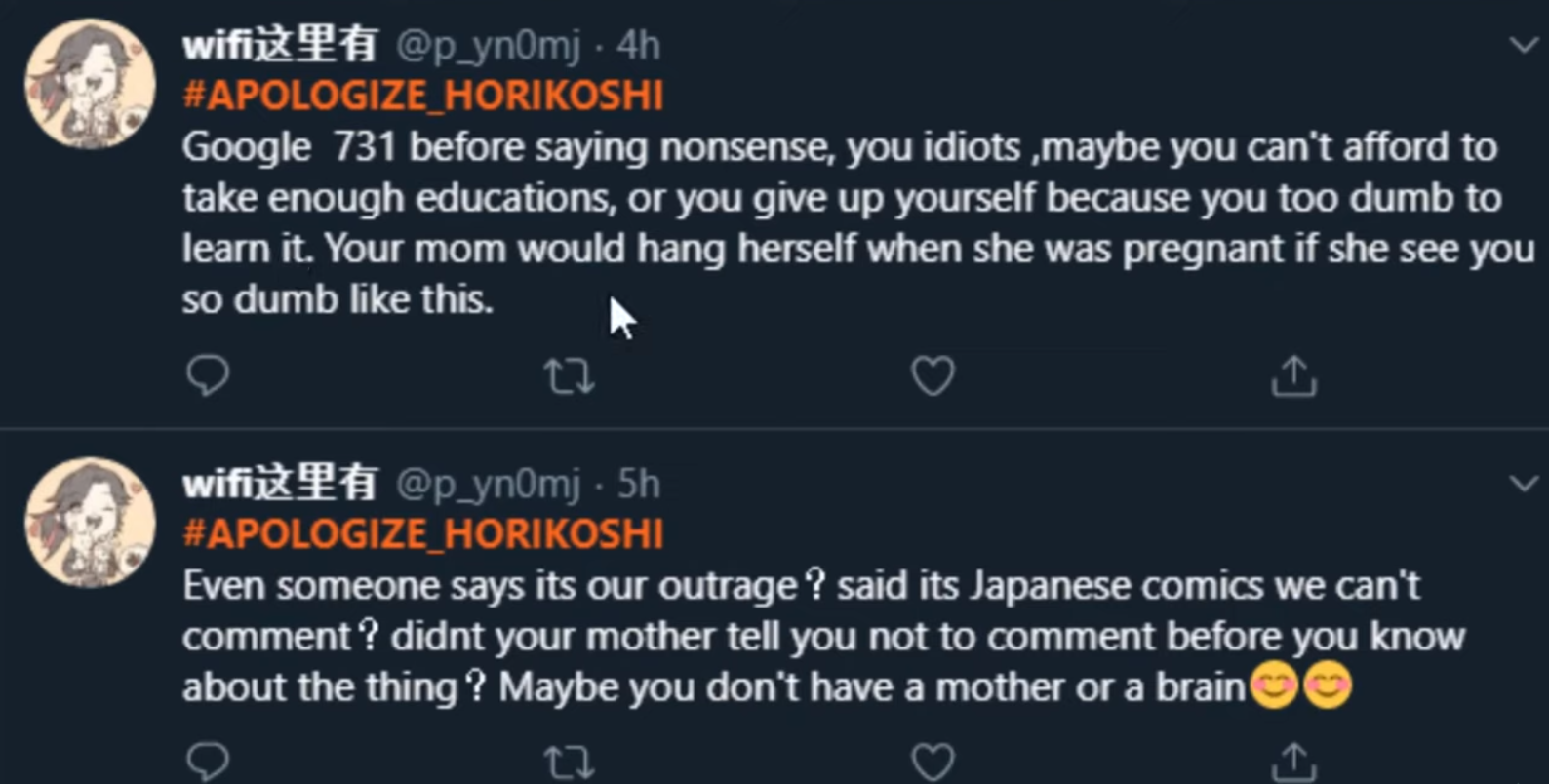 Weekly Shonen Jump and Horikoshi acquiesced to the demands and decided to issue an apology on February 3rd, 2020.

Anime News Network offered a translation of the tweet, which reads…

“Many have pointed out that the character name ‘Shiga Maruta’ in this week’s Jump chapter has brought up recollections of acts done in the past. I did not intend for that name to be associated as such. I take this matter very seriously and will change the name.”

This was followed by a separate statement made by Weekly Shonen Jump on February 3rd, 2020, which was posted on the official Twitter account.

NyanNet offered a translation of the post, which reads…

“[Announcement] We have received some concern that the character, [Shiga Maruta (志賀丸太)], who appears in the 10th issue of the Shonen Weekly Jump (released on Feb. 3rd) [My Hero Academia], has a name that “may call actual historical events to mind”. Neither the author nor the publisher had that kind of intent when creating the name.

“But, as referring to the actual historical events that are completely unrelated to the character was not our intent, after conferring with the author, we have decided to change the character’s name when the manga comes out in the comics.

The news was also picked up by YouTuber Hero Hei, who did a video about the incident.

As pointed out in the video, the character was a villain, so it wasn’t like they were using the name to glorify any past tragedies.

But some people might be wondering, “what the heck does Maruta have to do with anything anyway?” Well, NyanNet posted a tweet thread from someone who attempted to add context to why some people were freaking out and demanding change.

First thing I wanna say though is white people gotta stop telling Koreans and Chinese people how they should feel. Second is that the statement Horikoshi released is an apology the way it’s worded in Japanese, but not in translation. I’m not saying anyone has to accept that.

In the rest of the thread, MaybeItFriendly wrote…

“Okay so one important thing to know in this mess is that Japan has not acknowledged a large amount of their WWII crimes. Chinese and Korean “comfort women” (forcibly r*ped repeatedly daily) who are still alive are fighting for recognition. They deny R*pe of Nanjing. And Unit 731.

“So Unit 731 is NOT really talked about in Japan. So I don’t think Horikoshi saying it was a coincidence is hard to believe. Japan got off no issue for Unit 731 cuz America (responsible for post war cleanup in Japan) pardoned everyone involved so long as they shared research.

“This was cuz the horrifying human experiments done by Unit 731 provided a LOT of medical knowledge. Let me level with you: Japan could have killed the world’s population multiple times over with plague germs. But they also researched how to defend against viruses.

“America wanted this knowledge and didn’t want Russia to have it. So all the monsters who ran Unit 731 mostly got off with no issue. Some got caught for other crimes by Russia. One of them became the head of the Japanese medical association. They lived long happy lives.

“It’s sickening, really, the lack of accountability. Every single person experimented on, or brought in for experimentation, was killed. The whole Unit was set on fire to destroy evidence. Plague rats released on the streets, causing issues for years. I’ve seen what remained [though].

“Worst part is, China cried out to the Allied Powers for help when the Unit tried mass spreading the plague. Britain said “there’s no way an isolated country like Japan can be more advanced in medical research than WE are.” Thus thousands of people died. Since most of the evidence was destroyed, and America pardoned those involved to secure as much research as they could, Japan has denied these crimes. They’re not taught in schools. The fact that Horikoshi is willing and able to acknowledge the pain and change the name shocks me.

“Like, I’m serious, that alone is taking a stance against the Japanese government for the sake of fans. Cuz the government would have you believe the event didn’t happen AT ALL. To agree to change the name to me shows his sincerity. Plus this is spreading awareness of the Unit.

“I would also be far more upset if Horikoshi, accidentally or non, tied a reference to Unit 731 to a hero. ((Looking @ SnK with Dot Pixis)). No, it’s tied to a man who horrifically experiments on people. It’s not glorifying the Unit in any way. We’re not meant to like the doctor.

“I’m glad that awareness of the way Japan denies war crimes can be spread. I’m sorry to every Chinese/Korean person still feeling the pain from this. I don’t think attacking Horikoshi is the right solution, but that is not to say your pain is invalid. At all.

“I 100% support the fight to have Japan acknowledge its war crimes. But Horikoshi is already changing the name, and one mangaka’s actions will never make up for the volume of hurt the Unit caused. I try to spread knowledge of Unit 731 where I can.

“I’ve always been horrified by how swept under the rug this piece of history is. Let’s all try to learn from this, and speak up against those who aren’t making changes to undo their wrongs. If you want to learn more about all Unit 731 did, DM me – I can’t fit nearly enough here.”

What’s so ridiculous about it all is that you would think SJWs would want people to be more informed about a little-known event in history that had such a significant cultural impact on Korea and China, but instead they’re so shortsighted that they would rather censorship reign supreme in order to bury a tie into actual history in order to sate their fragile feelings.

As pointed out by Animatic811 and Doll Life Dan, it’s not a good look for the manga or anime industry when you see Japan bending the knee to outrage mobs.

Is peack Clown World when twitter mobs now have influence in the anime industry. Weebs better enjoy their hobby wile it lasts, because we all know what’s coming after this. https://t.co/JwNPRzpORY

If you think that this ends here, think again.

Just remember, we tried to warn you.

(Thanks for the news tip Animatic811 and Doll Life Dan)