MyAnimeList allows users to vote for their favorite anime on the website. Following Funimation’s cancellation of Interspecies Reviewers, claiming it didn’t meet their “standards”, anime fans from around the world gathered to show support for the show as more streaming services and networks axed it from their line-up. Well, MyAnimeList didn’t like that and decided to start censoring the positive reviews for Interspecies Reviewers, and then proceeded to ban users who called them out for their censorship.

Sankaku Complex is reporting that after the show was cancelled, it was rated 10 out of 10 by many MyAnimeList users.

Some of the positive reviews came after the censorship was covered by anime YouTubers such as Nux Taku.

When MyAnimeList caught wind of this, they retaliated by curbing the positive scores, labeling them “vote brigading”.

As reported by NyanNet, on February 7th, 2020, forum moderator NoLiferSoul made a thread on the MyAnimeList forums, stating that the high user score for Interspecies Reviewers was a result of vote brigading and that they don’t tolerate it.

Since you need an account to access the forums, NyanNet transcribed the gist of the moderator’s comments, which read…

“- All threads created after this timestamp must be only about the story of the anime itself.
— Creating new threads related to the rating or companies cancelling it may lead to immediate bans.
– Discussion relating to the entry’s score/rating/vote brigading/etc goes here.
— Posts in other discussion threads about this may lead to immediate bans.
Complaints about the decision to nullify all votes related to the brigade (be they up or down votes) can go in this suggestion thread.”

“Will this be fixed?

They held true to their word and began banning any and every user who brought up the topic of Interspecies Reviewers being censored, as well as MyAnimeList’s role in helping to propagate said censorship.

One longtime user since 2008 e-mailed us to inform us that he had been banned from the site. 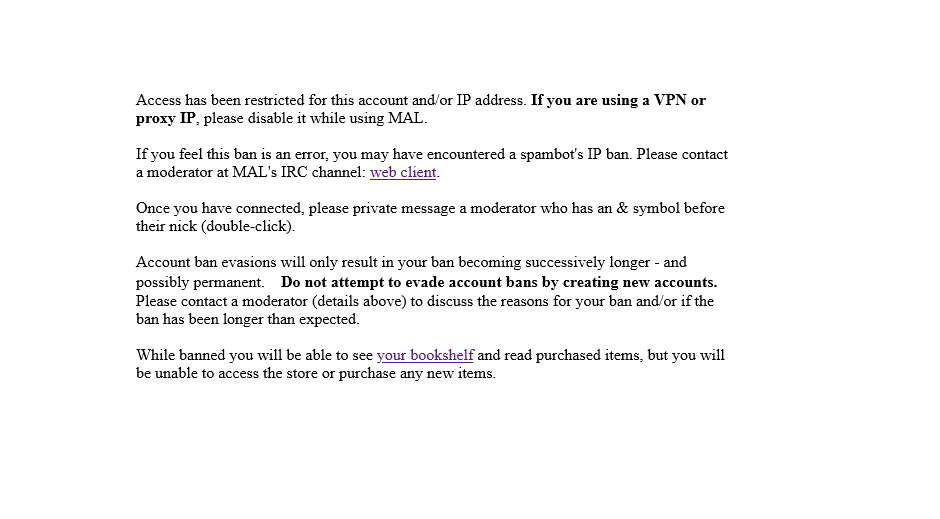 What was he banned for? Writing the following comment…

“What happened here is that there was an INJUSTICE being done to a show that was canceled out of nowhere.”

“Fans rallied to the show and one of the few ways to show their support for a show is to in fact vote for it in support of it. What MAL and its volunteers (slave labor) is doing is censoring the will of the fans that were showing support for the show. ESP with how they are deleting comments that are rightfully upset at the manipulation by the MAL team itself to censor and suppress fan support”

“Everything MAL is doing in handling this i wrong and unethical on almost all counts. But what can you expect when its founders and owners who actually collect $$$ while using and abusing FREE LABOR. Really strange for a site with adds and 150 million views a month to need free labor….just saying”

“Odds are this post will get censored and deleted under their BROAD rules that they abuse just for the purpose of CENSORING dissent and to silence discussions.”

The message is no longer available on MAL, as the link to the comment leads to a 404 page error even if you do have an account.

MyAnimeList also proceeded to implement their new review rating system, as outlined in a post by the database administrator, Kineta, who explained on February 12th, 2020 that the new system will curb “vote brigading” and was already in planning before they began their dictatorial censorship surrounding Interspecies Reviewers…

“This system has been in planning for 6 months. Before Chihayafuru 3, before Ishukozu Reviewers.
For 10 years prior to this, these accounts were dealt with by admins via the Illegitimate Accounts thread.”

If you check the Top Anime list as of February 12th, 2020, Interspecies Reviewers has been moved out of the top 50 anime list.

There seems to be a concerted effort from outfits like Funimation and supposed anime communities such as MyAnimeList to not only prevent people from viewing Interspecies Reviewers but to also prevent any sort of community groundswell from popularizing the anime.

Don’t be surprised if other Western-based anime communities to pull a similar stunt in an attempt to keep the censorship train rolling.

(Thanks for the news tips Rafael, Cinj, Immahnoob and Brad)