While Microsoft and Sony are in a race to the bottom over who can be the wokest and most censorious company among the console manufacturers, Nintendo has opted to take a different approach to this generation. Far from perfect, the company has garnered a lot of positive press from their strong focus on games and consumers. Provide of course said consumers aren’t asking for a refund.

The results of the Nintendo’s lax stance on content policing combined with the migration of users fleeing the censorship of the other two giants it is no longer in the realm of speculation if this has benefited Nintendo. As their 9 Month Financial Report has confirmed huge growth and performance across the board. 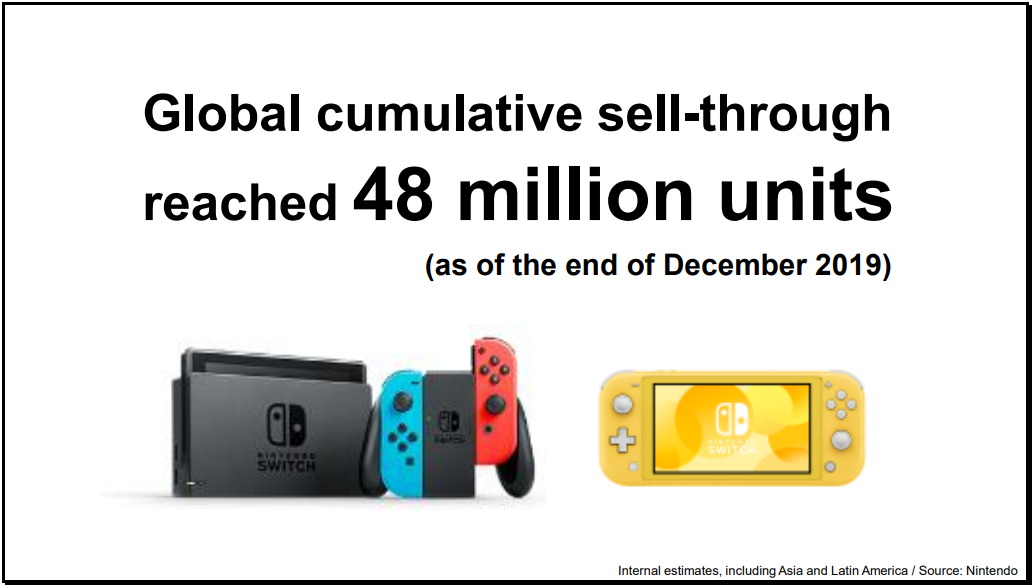 As of December Switch sales have reached 48 million units sold worldwide. With sales projections exceeding the prior fiscal year’s performance. Through the report the phrase “Sell-Through” is frequently used. This term simply refers to products that were sold directly or indirectly to the end consumer. Without padding the numbers with shipped to retailer figures or any other metric.

Surprisingly to no one all of Nintendo’s first-party titles that released last year saw impressive sales figures. Luigi’s Mansion 3 delivering massive growth compared to the previous entry and Pokemon Sword and Shield again delivering successful sales numbers. Though both titles outpaced Ring Fit Adventure, the title did manage to sell 1.7 million units, which for what it was is a successful sales run. is rather successful.

The total sell-through in Japan, North America, and Europe for Luigi’s Mansion 3 has exceeded 4 million units in the 9 weeks since its release on October 31. Compare to the sellthrough of Luigi’s Mansion: Dark Moon released in March 2013, it is off to more than twice as fast of a start during the same time period from the release.

Compare to Luigi’s Mansion: Dark Moon, its momentum of sell-through is particularly stronger in North America and Europe, the ratio of overseas sales has been high for this title. In addition, although people in their twenties were the main purchasers immediately after release, the ratio of children and families increased as the holiday season approached. 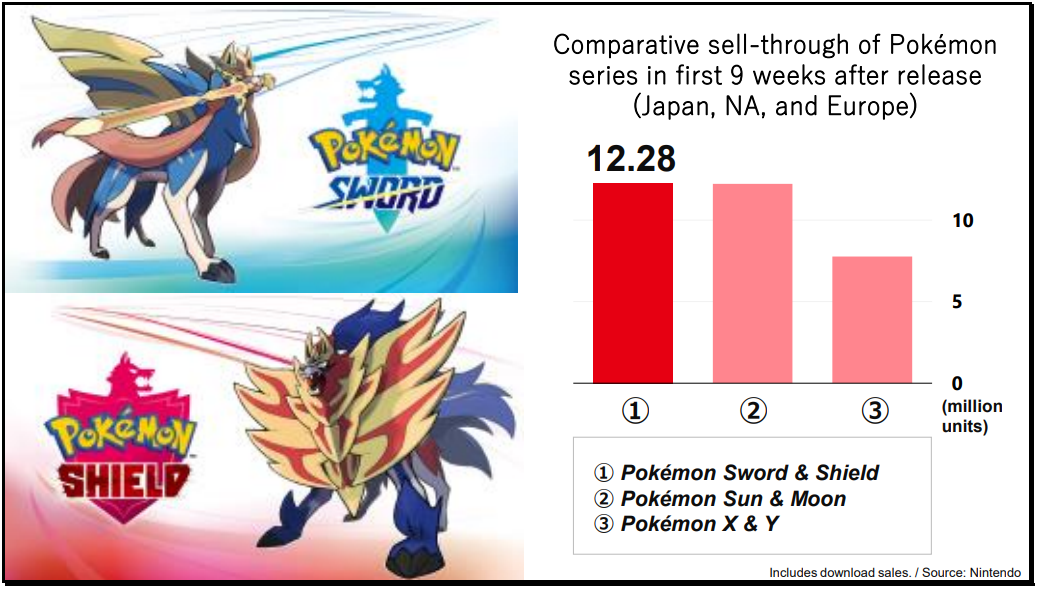 Pokémon Sword and Pokémon Shield, released on November 15th, is the latest entry in the Pokémon series. This graph shows a comparison of cumulative sell-through for different entries in the Pokémon series during the first 9 weeks after release. Cumulative sell-through for Japan, North America, and Europe in the first 9 weeks after release was 12.28 million units. This record surpasses Pokémon Sun and Pokémon Moon, which held the previous record for best-selling entry in the Pokémon series. Sales have continued to grow since the beginning of the year, and we expect sales to continue as these become evergreen titles. 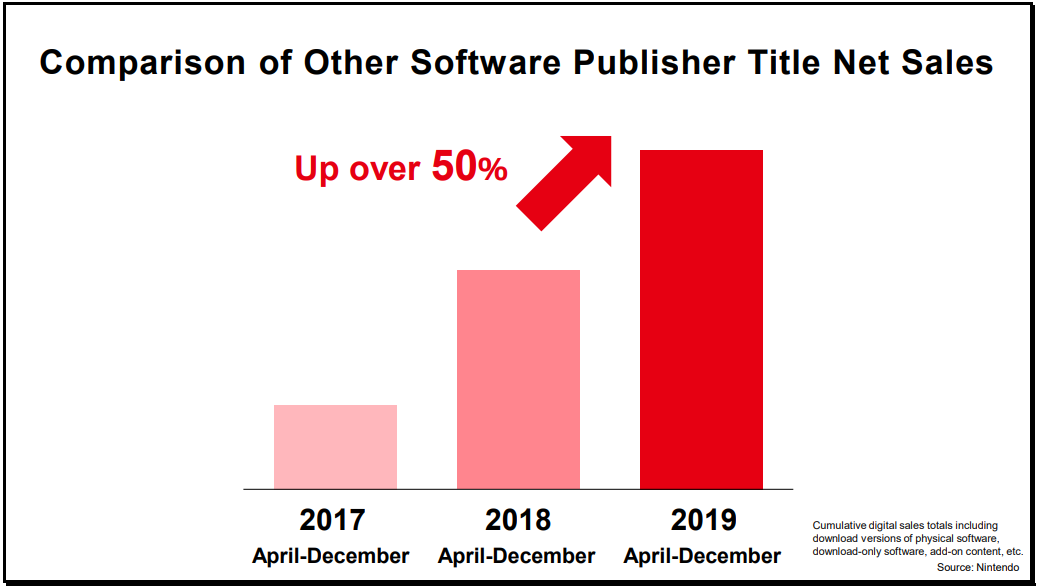 Historically where Nintendo has enjoyed first-party success, third party struggled on the platform dissuading many of the AAA publishers from committing resources to developing titles for Nintendo’s platforms. With the great migration from Playstation this trend has changed with third party sales jumping over 50% over last year.

Demonstrating that the market very much wants sexy in their games and will go so far as to adopt a new platform in order to get it rather than put up with censorship from the two giant publishers.

In other news, Nintendo announced plans to open more Nintendo Stores in other countries following the success of their Tokyo location. Exact plans were not revealed in the financial report, but Nintendo confirmed to investors that expansion plans were underway.

In other plans, Nintendo confirmed that they will soon be consolidating offices. As of now, their operations are spread across 4 separate locations that, according to Nintendo, is harming the efficiency of their operations. No exact date was provided for the merger of their offices, but the announcement is likely to avoid fears when the announcement that locations are closing will generate in the media.

Additionally, while Nintendo has boasted of the success of their Nintendo subscription they have confirmed that despite growing overall it is seeing a lot of drop off. Thus they will be focusing effort on improving the value of the subscription. Increasing value is not something that will remove the bad taste from consumer’s mouth from having to pay for what was free while getting very little for it, it is a good sign that Nintendo acknowledges its value is lacking and they aim to improve it.

Nintendo will continue to have its shortcomings, but unlike the other two console manufacturers, they appear to still understand the value of the phrase: The Customer is King.

If they can continue ignoring the rampant Twitter mobs and penniless progressives their future prospects will only continue to grow year over year.