People Can Fly is hoping to be one of the first developers to take advantage of the PS5 and Xbox Series X’s latent power. The initial reveal of Outriders took place last year during E3 2019, but the game didn’t turn any heads or warrant any applause. It was later re-revealed recently with a very similar level of disinterest from most gamers. Well, People Can Fly have not given up, and their latest attempt to build hype comes in the form of some gameplay videos captured right from the source.

One such gameplay capture comes from GameRiot, who actually had the courtesy to disclose that he was flown out to Poland to get some hands-on time with the upcoming next-gen game. You can check out the 20 minute gameplay preview below to see what one of the first ninth-gen shooters will look like in action.

The game is about a colonization crew attempting to find a new Earth to populate.

The opening cinematic features an exploration crew examining a disturbance, which results in some Prometheus-style black goo infecting one of the crew.

During the opening cinematic a large portion of the crew get infected and evaporated, including some Liberal-looking black chick with danger-hair. 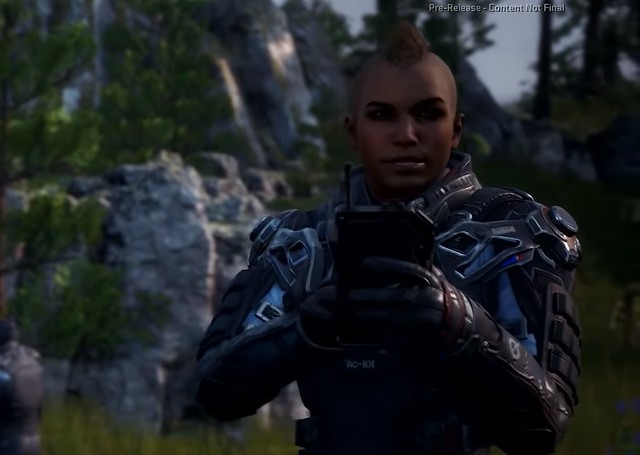 Following the cinematic you’ll create a character and enter into a battlefield some three decades after touchdown.

GameRiot didn’t showcase the character creation so I have no idea if the game is racist against whites or not. That’s become a common trait in many new games, where you can’t make pale whites or Asians, like in Mass Effect: Andromeda, which required gamers to beg BioWare to enable the option to make pale white characters.

Thankfully, YouTuber TheRadBrad did manage to showcase some of the character creation footage, which you can check out below.

Like most new AAA games, they no longer call males “males” or females “females”. Instead it says to “pick a body type”, just like Cyberpunk 2077.

This lets you know the game is outright converged already. Anyone too cucked to simply allow you to choose a gender with clear text saying “Male” or “Female” isn’t worth the time of day.

We don’t get to see just how bad or how ugly the female characters have to be since the video posted by TheRadBrad goes with a male character.

But based on the default design it doesn’t look good, especially considering that the default female character is another shaven-headed lesbian.

The actual gameplay in Outriders isn’t very impressive at all. It’s as generic and passe as any and every other looter-shooter out there.

The gunplay is extremely boring and not really interesting at all. If you’ve played Destiny or The Division then you’ve played Outriders.

The game can be played either in single-player or with up to two other players in a three-player squad mode.

The wall-hugging is also like a mix between The Division and Gears of War.

Like other looter-shooters you also have access to various special abilities spread across four different classes. Each class allows you to specialize in certain kinds of specialties, such as freezing enemies, setting them on fire, or evaporating them.

Unfortunately the been-there-done-that gameplay isn’t helped any by the less-than-intriguing story and the pozzed female characters.

Yes, all the females they’ve showcased so far look hideous, old, or like Liberal lesbians. And obviously the grand marshal of the surviving colonists is obviously a female… an old, empowered female, because of course.

If you’re into nightmare fuel then you’ll probably enjoy their selection of faux-female characters, but this is every other AAA game out there all over again.

For those of you who came off The Outer Worlds or Anthem, not only is the aesthetic generically similar in Outriders but the ugly females will prevent you from finding any solace in the art-style whatsoever.

Expect a bunch of incel Centrists™ to run interference for the hideous looking caricatures pretending to be women, mainly because they have no idea what a beautiful woman is supposed to look like.

Outriders is due out for the Xbox One, Xbox Series X, PS4, PS5, and PC.