One of the coolest cyberpunk games to release this generation is Reikon Games’ Ruiner, a sexy-and-dangerous journey into the grotesque underbelly of a violent yet tech-savvy future where gangs run amok, sex sells in spades, and body harvesting is just another way to make quick cash, or avoid becoming part of the meat grinder.

Gematsu picked up the news from a tweet made by Reikon on February 21st, 2020.

YOU CAN NEVER ESCAPE.

RUINER IS COMING TO #NintendoSwitch

You asked, we deliver. It took a while, but we’re almost there. Get ready. Help us and SPREAD THE NEWS!#RUINER #ruinergame #nintendo #switch #cyberpunk pic.twitter.com/PuAmj1g4SJ

What a cool little way to start the weekend, eh?

Ruiner is a top-down isometric hack-and-slash shooter where you take control of a mysterious warrior with a helmet feeding him instructions from a hot hacker chick, a cybernetic arm that allows him to unleash devastating attacks on enemies, and a katana the likes of which Hanzo Hattori would be jealous.

The game is a mixture of tactical encounters where you have to gauge and time your attacks, while also throwing in break-neck speed run-and-gun action at times.

Most of the combat takes place in arena-style environments set amongst the dredges of a corrupt city hocked up on addiction and faux-fixes to terminal problems. 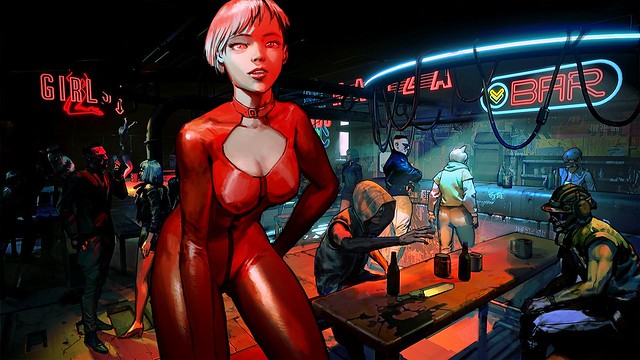 Ruiner isn’t very long but it’s complimented with a gameplay loop that encourages gamers to go back and play again after beating it the first time.

I think it only took me four hours to blast through the title, soaking in the great soundtrack and the on-point red-hued aesthetic.

When people attempt to justify Cyberpunk 2077’s degeneracy by saying that “it’s supposed to be that way!” what they’re really saying is that they’re okay with Liberal degeneracy. A game like Ruiner also contains the crime-ridden dystopia depicted through a lens of unbridled violence and body-horror, but it isn’t just that. Reikon correctly juxtaposes the grotesque with the cool, and the disturbing with the sexy.

Cyberpunk isn’t just about making you feel sick and disgusted, it’s also about the flip side; the allure of technological advancement, super-powered weaponry, and the rule-breakers that all make it worthwhile.

It’s one of the reasons I liked Ruiner so much, and why I despise everything about Cyberpunk 2077 so far. If I want to indulge in degenerate Liberal propaganda I can look no further than Twitter… or to a lesser extent, ResetEra.

If I want to play a cool cyberpunk game that captures the nuances, the dangers, and even the awesome elements of a dystopian future, I’ll play a game like Ruiner. And soon, Nintendo Switch owners will be able to do the same.

Ruiner is currently available for PS4, Xbox One, and PC.