These days more rumors and potential leaks are hitting the news circuit than actual announcements from the AAA industry. Were it not for the Silver Age of Indie/AA games, it would be maddening as both manufactures aim to gear up as much hype as humanly possible ahead of their holiday console launches.

A few days ago we covered some rumors coming out of 4chan that appear to have been verified now by several NeoGaf users. The source claimed that a State of Play scheduled for February 5th would reveal the Playstation 5 with further presentations planned to generate hype throughout the year.

This information was again leaked on NeoGaf by potentially the same person and later was confirmed by a verified industry insider going by the handle of VFXVeteran. 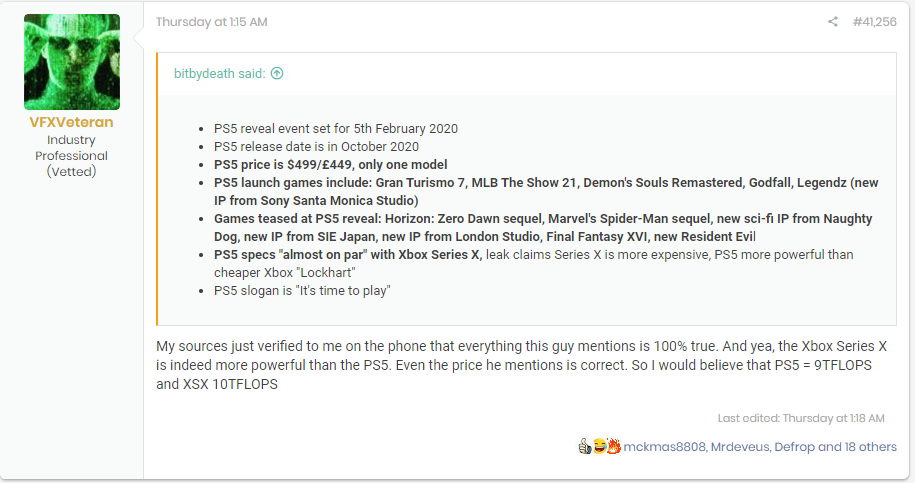 According to him the information provided by user Bitbydeath is in fact accurate, according to sources he spoke to over the phone. Furthermore, VFX announced that the pricing was accurate at $500, but the rumor that the Playstation 5 was more powerful was in fact false.

If Microsoft eats a hundred dollars on the price as Sony did in 2013 we very well could see a reversal of the last console generation. Especially with exclusives now being relegated to console exclusives.

Countering this information a Brazilian outlet by the name of Combo Infinito claims their sources told them the conference was in fact scheduled for the 15th, not the 5th. Earlier presentations are scheduled, but they scheduled for their investors rather than the general public.

On Reddit the author would go into more detail explaining how some outlets have had early access to materials that have allowed them to begin ringing up preorders. Given Sony and Microsoft have sales partners this is not too unbelievable and would be more likely than not if an announcement were only weeks away.

The source additionally claims that Sony will engage in intentional scarcity to boost sales demand over the Holiday season. Again this is a standard practice from console manufactures and one Nintendo was heavily panned for last generation.

Keep in mind these are just rumors, but all signs point to a major announcement this month from Sony. When this announcement will take place will only be revealed by time.