Society is in a steep decline. Liberal Progressives own all of mainstream and enthusiast media. They continually pepper the public with the idea that fictional states such as being “non-binary” exists, and force-feed the effects of cultivation theory down everyone’s throats about gender being a social construct and ridiculous things like “pansexuality” being an orientation. All of this nonsense played a role in affecting the development of Animal Crossing: new Horizons, as admitted to by game director Aya Kyogoku.

Go Nintendo picked up the news from an editorial by the Washington Post, where Kyogoku explained to them why they made the changes they did in the character creation of Animal Crossing: New Horizons.

In the article they explained…

“New Horizons’s flexible nature extends to character customization too. Clothing items and hairstyles aren’t restricted by gender, giving players more options on how to represent themselves in the game. This level of fine-tuning your character is ‘not just about gender,’ Kyogoku said, but relates to the team’s overall feeling that “society is shifting to valuing a lot of people’s different identities.’

We saw how this was applied to the game’s character creation process, where the English localization completely removed the game’s gender designations.

However, this was only for the English version of the game.

Every other language either referred to gender identifiers for “Islander” or they outright called them “Boy” and “Girl” or “Male” and “Female”. 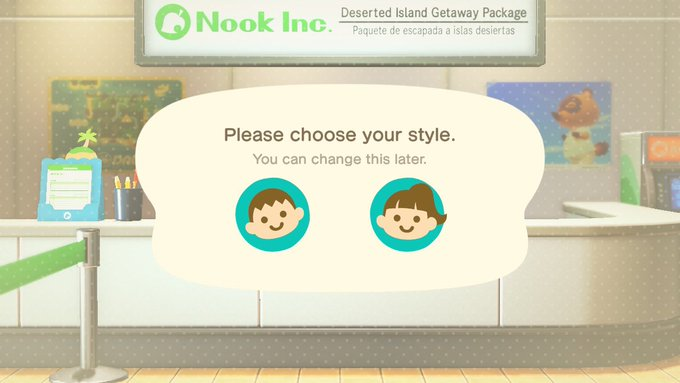 It was only in the English version were the identifiers completely removed to coincide with the push from Liberal Progressives to influence people into thinking gender is a social construct. We’ve been inundated with this messaging for years now from every single facet of media, with the exception of a few remaining Conservative outlets who are only barely holding out.

While some might say that the effects of cultivation theory is negligible, the evidence appearing more and more in games – especially those for kids – proves otherwise. There’s a constant bombardment from every facet of Lefty-controlled media to try to influence people into being accepting of their agenda.

YouTuber Grant Abbitt did a video back on April 18th, 2014 about cultivation theory and how it can affect audiences over time with enough influence and delivering the right kind of message.

I simply refer to this as the Three ‘I’s process: Infiltrate, Inculcate, Indoctrinate.

Leftists have infiltrated media, entertainment, and even politics. They inculcate people with the constant messaging that gender is a social construct; that gender roles are a patriarchal concept; that men can be women and women can be men at a whim; that there are no differences between the genders; that men can have periods; that women are just as strong as men; etc., etc., etc. They use this to eventually indoctrinate people to believe that their ideological principles are truisms. 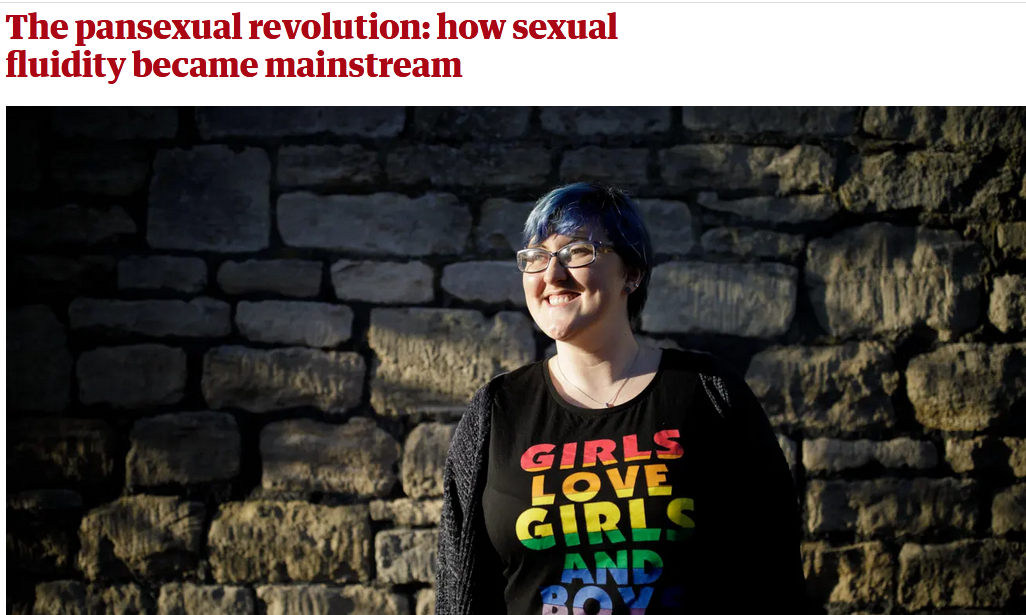 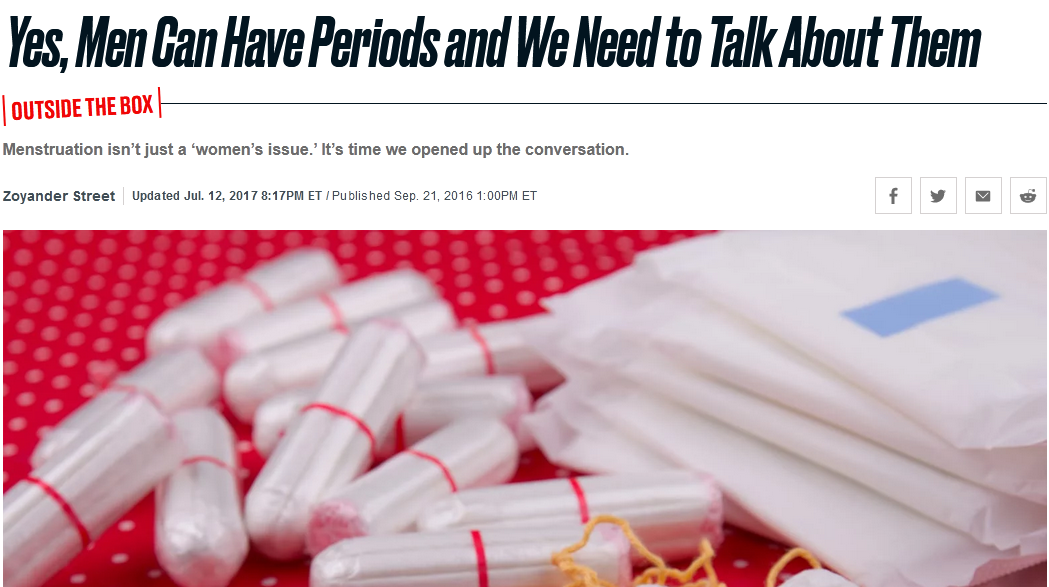 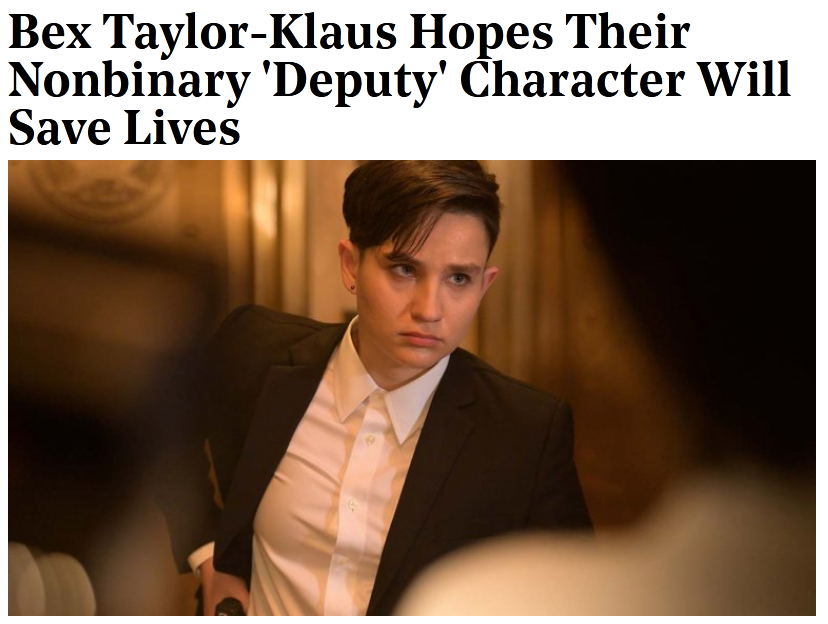 That last image is quite telling because it literally reconfirms what I mentioned above.

In the article published February 14th, 2020 on The Hollywood Reporter, the publication literally states that the purpose of pushing the whole “non-binary” propaganda is to normalize it on television and throughout media, where they write…

“The nonbinary star discusses their character’s gender identity and the importance of exposing broadcast audiences to complicated discussions.”

The entire interview is propaganda for lunacy.

Bex Taylor plays a lesbian security liaison on the Fox show Deputy who is married to a lesbian doctor. They attempt to use the show as a platform to push the falsehood that “non-binary” is a biological state and that there are more than two sexes.

“One of the things I love about Bishop having this conversation with Dr. Reyes is Paula is a doctor. Paula’s a surgeon. Paula understands the intricacy of biology. But Paula has never had to explore the intricacy of identity and in that conversation we get to slide that in there in what to me feels like a very honest line: “I know biology, I know that there’s more than two sexes and I don’t understand the intricacies of identity.” We worked really hard and it was a beautiful, beautiful effort from all the writers listening and learning. I know our showrunner Kim Harrison did some incredible research off on her own, as well as speaking to me and our correspondent from GLAAD, Nick Adams. He’s absolutely wonderful.”

Yes, the show has a correspondent from GLAAD because the organization is intent on pushing more and more LGBTQIA+ propaganda into media.

In fact, GLAAD has openly come out and said that by 2025 they want 20% of all characters portrayed in media to be on the LGBTQIA+ spectrum, this is despite the fact that gays and lesbians only make up 1.6% of the American population, as reported by the Washington Post.

That means they want 12.5 times as much representation on television than what the actual demographics are.

Few media outlets are speaking out against this kind of lunacy, but the Illinois Family Institute went and called a spade a spade, noting that this is an all-out assault by Marxist to “destroy the concept of family”.

Heck, in the U.K., the board of education threatened an Orthodox Jewish school to include LGBTQIA+ teaching material or risk prosecution. It seems to outlandish to be true, but KotakuInAction 2 spotted the report on Pink News, who wrote…

“Several other Orthodox Jewish schools in the Manchester area have come under fire for refusing to enact LGBT-inclusive education, which the government has ruled will be compulsory for all UK schools from September onwards.”

The fact that mainstream media and nearly every form of entertainment is pushing pseudo-science and the “it’s okay to be gay” narrative at nearly every facet, especially in children’s cartoons and programming, normal people should be worried. Unfortunately, all of Big Tech’s social media is controlled by the very people who want to see your kids drowned in a deluge of degenerate drag culture, gay couples, and lesbian relationships.

It’s disgusting that companies like Nintendo are now supporting this kind of propaganda from the Cornhole Commissars by feeding kids agitprop through games like Animal Crossing: New Horizons.