Jon Del Arroz is currently trying to get the comic book Dynamite Thor funded on Kickstarter. The comic was apparently shadowbanned on Kickstarter, according to a post on Facebook made by Arroz on February 21st, 2020, but the comic is currently showing up in general searches on search engines. However, any additional help the comic could have received from Arroz appearing at Friends Of Genre Convention in California to help promote the comic has been dashed after the organizers indefinitely banned Arroz from the event.

The ban came after Arroz began mocking and criticizing Social Justice Warriors, some of whom the FOGCon account has been promoting on social media. On March 1st, 2020 Arroz received an e-mail from FOGCon informing him that he was banned for violating their code of conduct.

If you’re unable to read the message from the Facbeook embed, you can view the message below. 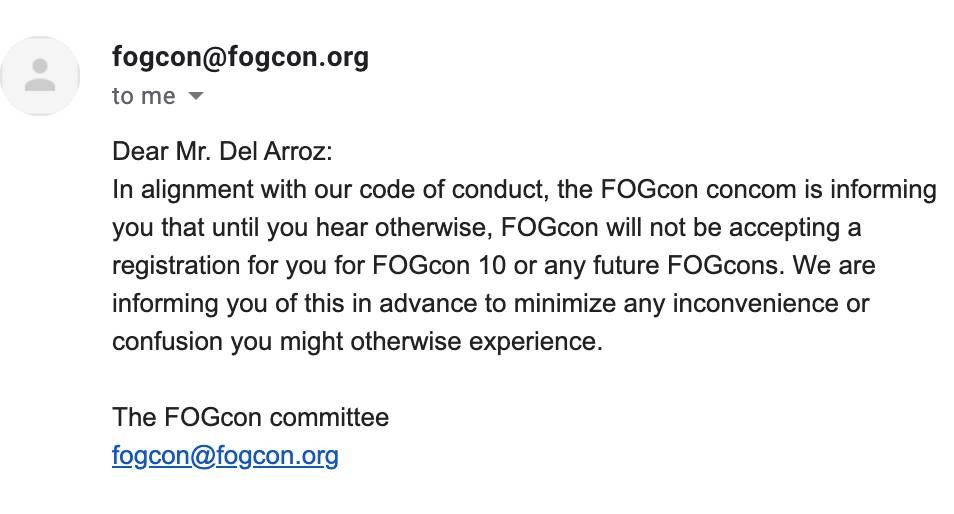 If, for whatever reason, the image is not displaying for you, it states…

“Dear Mr. Del Arroz:
“In alignment with our code of conduct, the FOGcon concom is informing you that until you hear otherwise, FOGcon will not be accepting a registration for you for FOGcon 10 or any future FOGcons. We are informing you of this in advance to minimize any inconvenience or confusion you might otherwise experience.”

Arroz covered the issue recently in a video he posted up on his YouTube channel, where he not only went over the letter sent from the FOGcon organizers, but also their social media feed, which was filled with Social Justice propaganda.

You can head over to the FOGCon Twitter account right now and see that they still have up tweets where they expressly practice anti-white sentiments, like the one they posted on February 26th, 2020, which netted a hilarious response from a user.

They also retweeted a thread about “misgendering” character pronouns.

As ridiculous as that sounds, it’s a real tweet thread.

As you know, anyone who is an active practitioner of putting pronouns in their profile are promoting people who do, they are mentally unwell and need to seek some serious psychiatric help.

Of course, since Arroz has criticized the whole intersectional illness FOGcon decided to make an example out of him by banning him from the event. It’s not unlike when Pensacon revoked Geeks + Gamers’ convention badge after Jeremy covered the Vic Mignogna situation without throwing Mignogna under the bus.

Surprisingly the convention has not been postponed or cancelled due to coronavirus, but they did make a thread about the outbreak and what measures they’ll be employing for hygienic and safety reasons.

…after receiving medical advice to avoid air travel due to their high-risk status. They will be greatly missed, and we’re investigating teleconference participation options. Honored Guest Mary Anne Mohanraj is still looking forward to attending.

However, if you are unable to attend due to illness or COVID-19 concerns, email [email protected] to discuss the option of rolling over membership to next year or donating your membership for someone else (“Angel Membership”) to attend next year.

We’ll keep you updated of new developments, but our current plan is to wash our hands frequently, practice good respiratory hygiene, and have an awesome FOGcon next weekend.

In the meantime, you can learn more about Jon Del Arroz by visiting his official website.

(Thanks for the news tip Martyn Bennett)