Leaked images from MangaGamer’s Discord for the localization team shows that many of the staff hate the very fans that they translate the content for. Not only that, but one of the team members is part of the avid anti-gamer circle who despises everything about gamer culture.

The images from the staff channels of MangaGamer’s Discord reveal that members of the localization, quality assurance, convention, support staff, and moderation team hate their fans, the community surrounding H-content, and many gamers in general.

It sounds like a completely absurd statement, but you can read the chat logs for yourself. If the imgur album is no longer available for any reason, you can download all of the images in the album from Mega.nz.

As you can see, Vacant Alice, a member of the quality assurance team and mod staff, talks about wanting to push a certain person off a cliff due to their criticisms of how content is translated.

Mr. Harocore, another member of the moderation team, the support staff, and part of MangaGamer’s senior localization team, chimed in to talk about how the Rance “whiners are the worst.”

Threepwood007, another member of the quality assurance team, concurred with the others about how terrible Rance fans were.

In another conversation they talk about the “morons” who spam the license suggestion channel because they just fill it with untranslated visual novels from the Visual Novel Database. 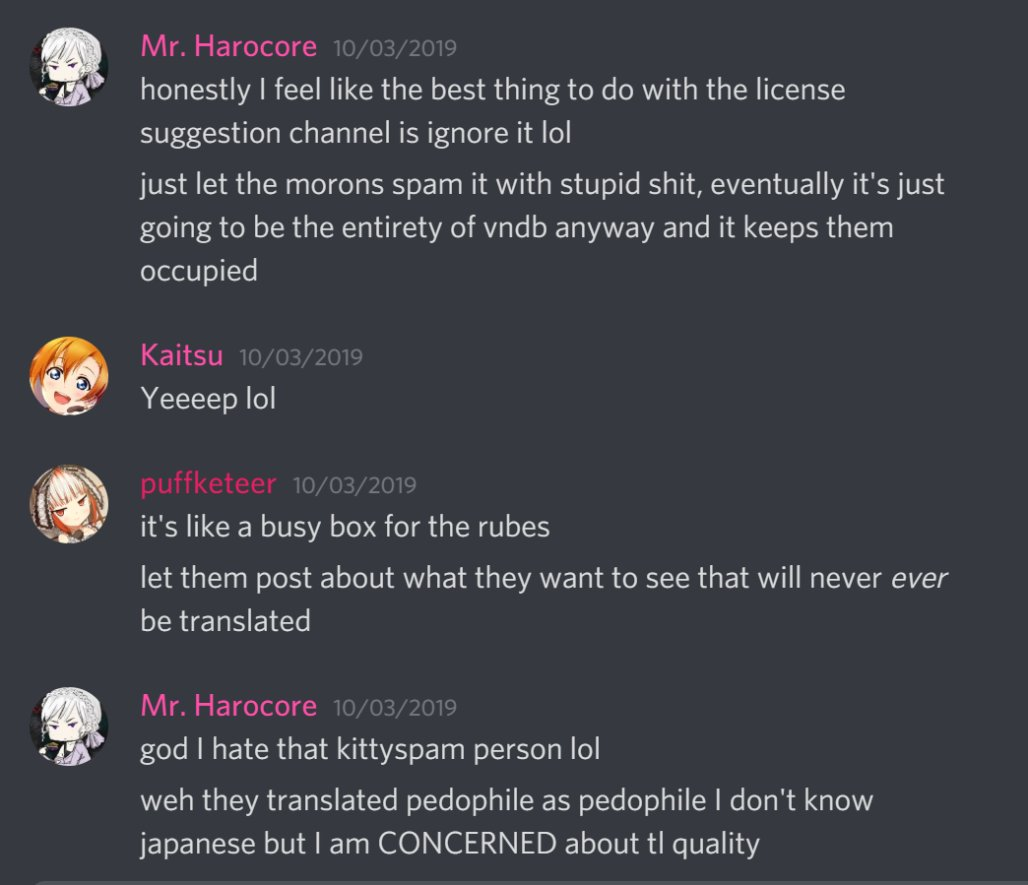 As pointed out by puffketeer, he states that it’s a “busy box for the rubes” because allowing them to spam it means they can post up visual novels that will “never ever be translated”.

They continue to mock and deride fans of visual novels in the thread. 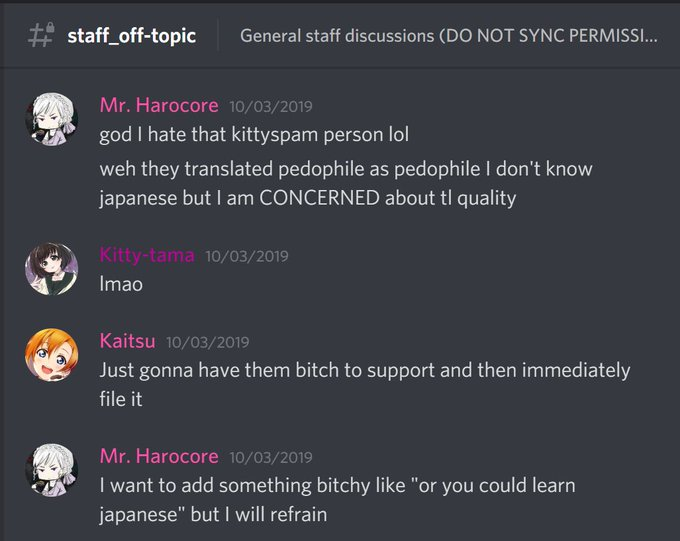 In another thread they talk about how much they hate a user going by the handle “Game god”, and puffketeer makes it known that he can’t wait for “automated luxury Communism” so they no longer have to do any work.

In another thread, Kaitsu, a member of the support team, convention team, the moderation team, and a senior staffer on the localization team at MangaGamer, began ragging on people who only buy discounted items. 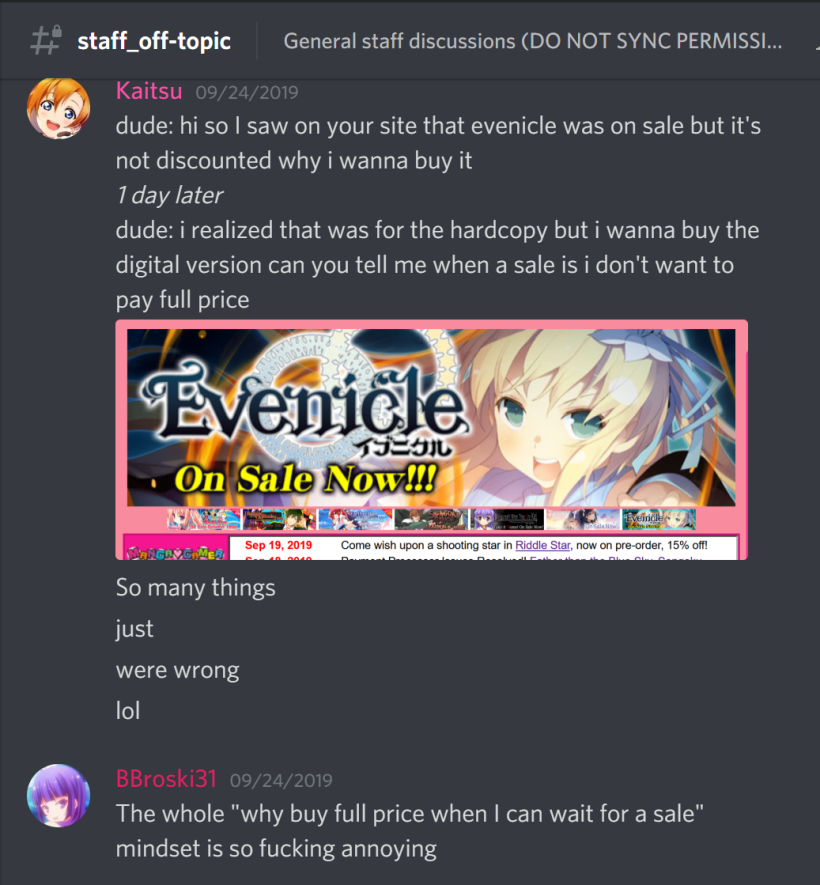 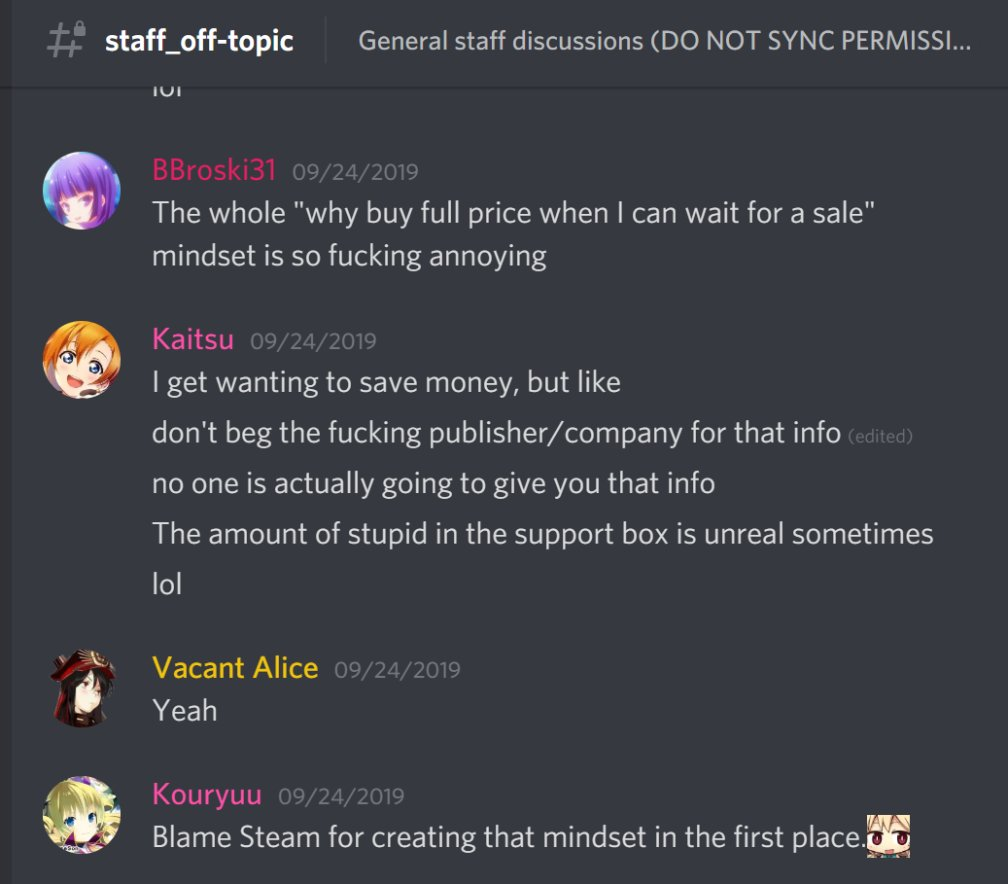 The staff then begins ranting on the chat in the general channel.

Another set of screenshots show Mr. Harocore heading into general to tell users to stop talking about NSFW topics, unless it’s directly related to MangaGamer’s products. 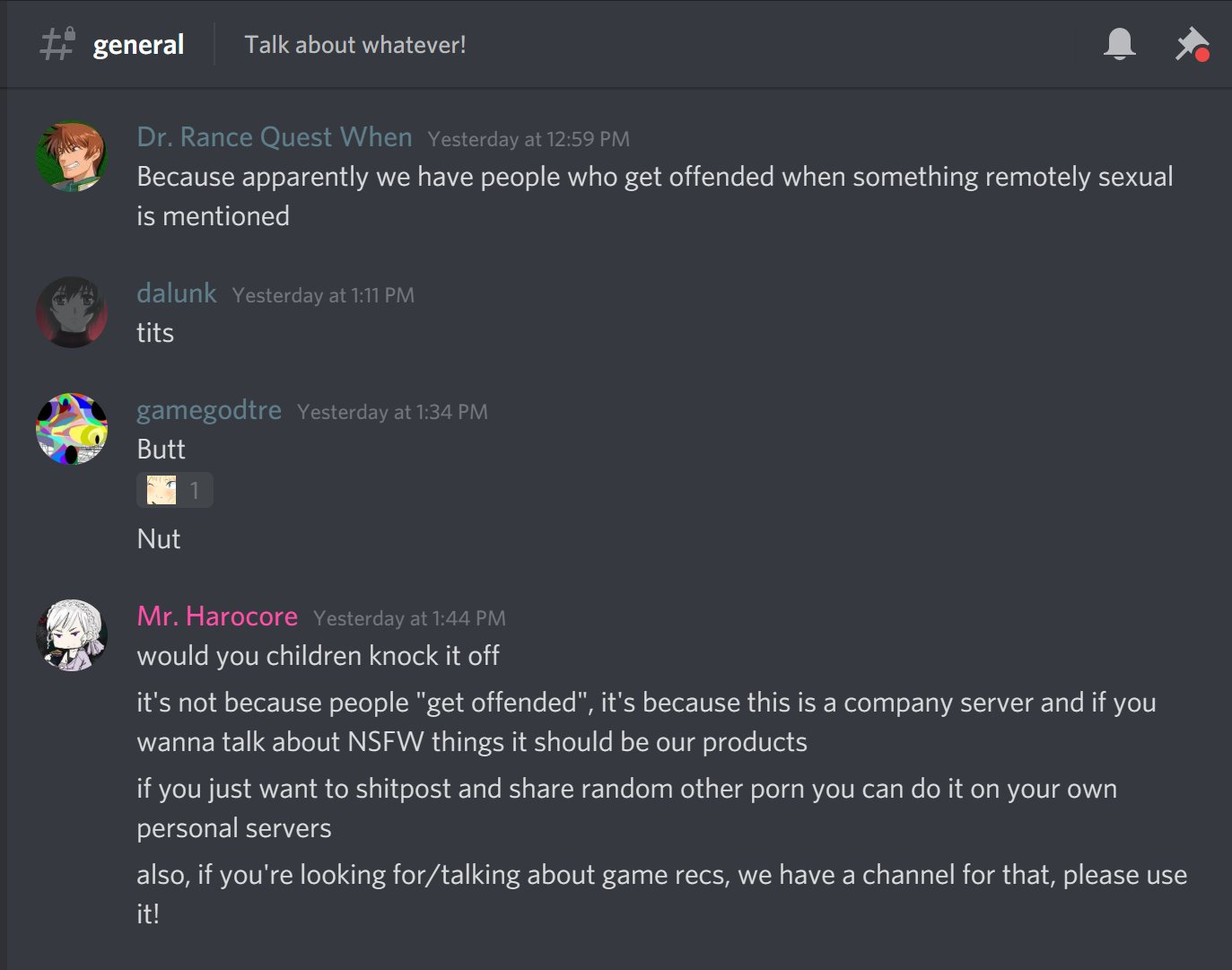 The people in general begin to question what they did wrong exactly and that if they did do something wrong, maybe there needs to be a NSFW general channel so people can simply talk about topics of a not safe for work nature. 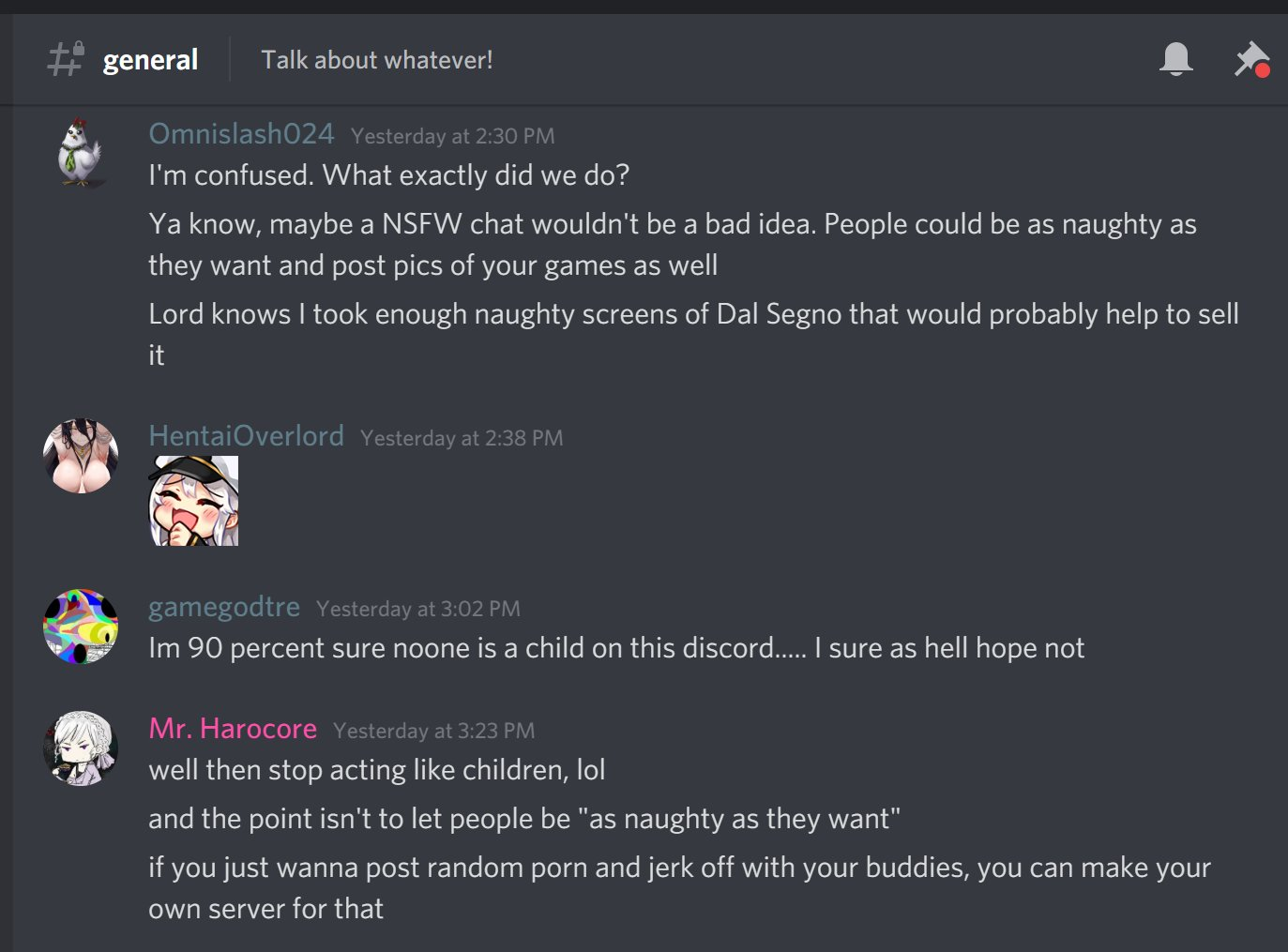 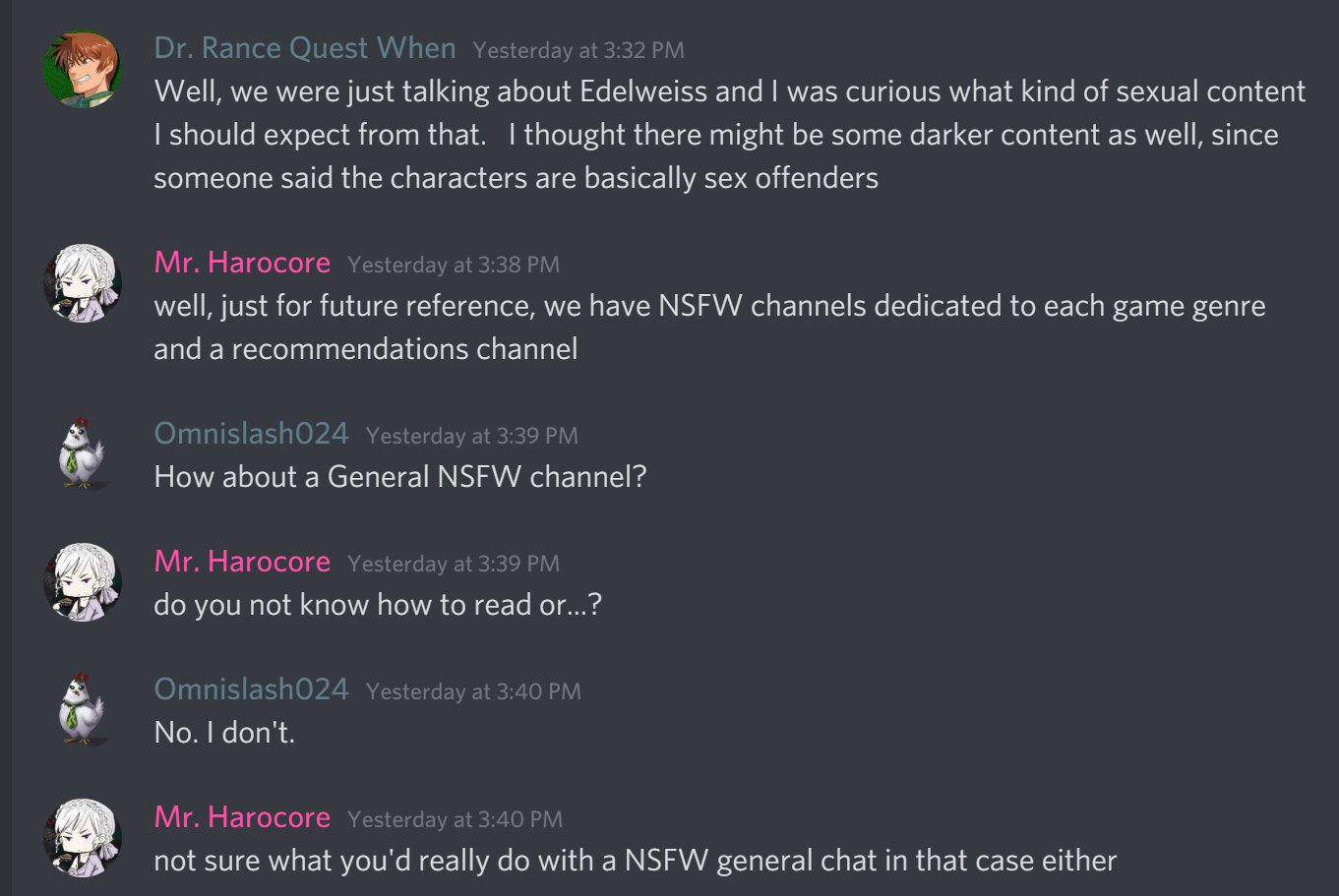 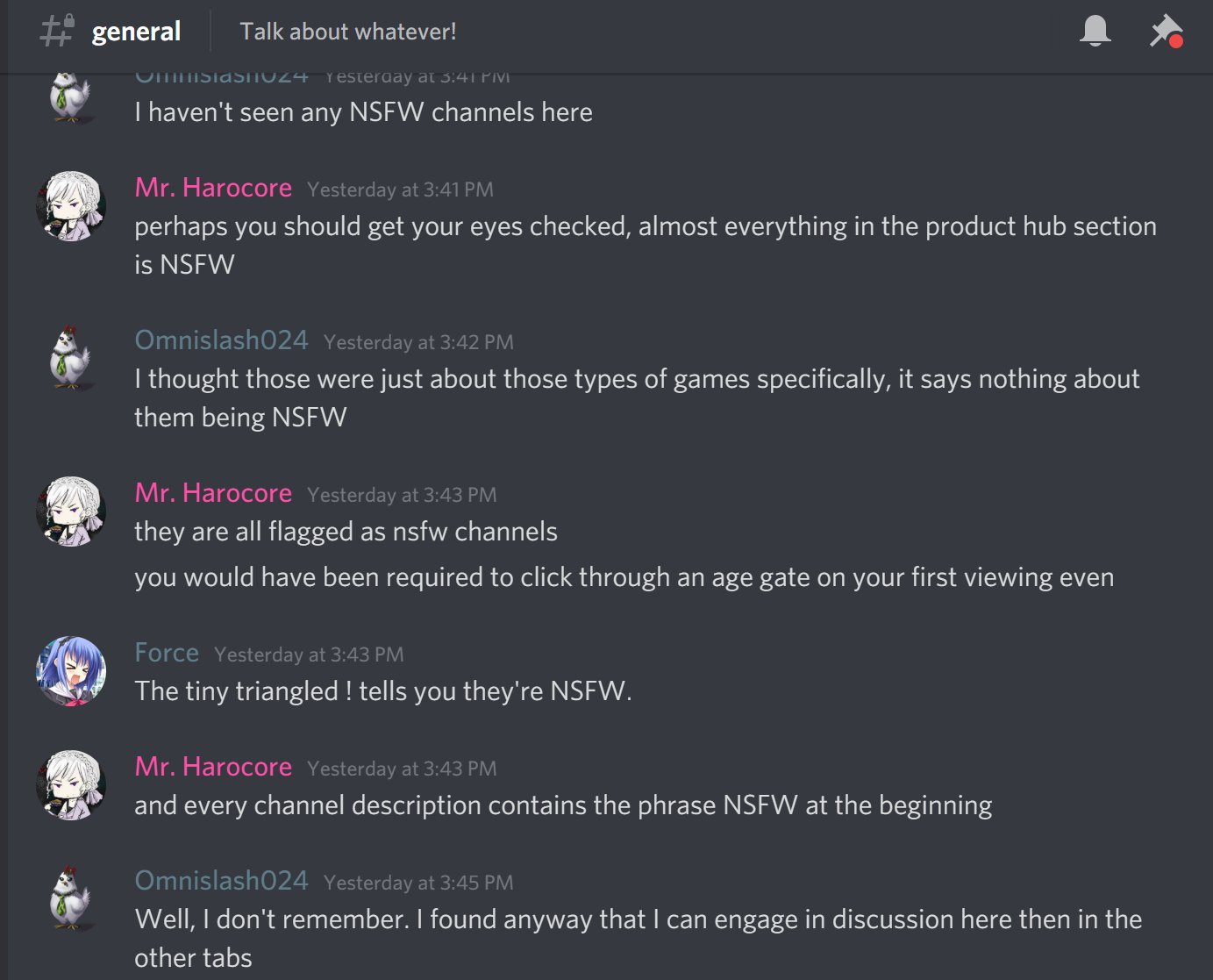 I attempted to reach out to Mr. Harocore to find out why there was such animosity toward the fandom who rely on MangaGamer to provide them with translated products that oftentimes aren’t banned from Steam or aren’t sold elsewhere. However, Mr. Harocore has me blocked on Twitter. 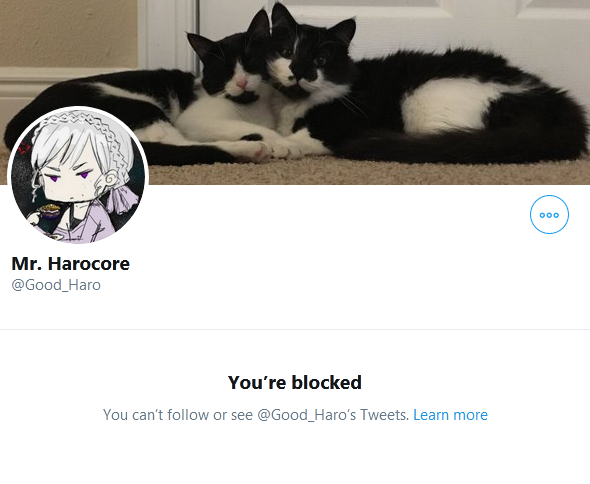 I also attempted to reach out to puffketeer, especially after it was discovered that he seems to support and retweet people who hate gamers and gaming culture.

He also ridiculed gamers for the disdain they held for Kotaku after everything Kotaku has done over the years to ruin gaming.

rhetorical question. I know why. it’s because gamers have petty-ass grievances with kotaku and the absolute neutering of it in the name of its ghoul owners within this already harsh media environment will trigger the libs

Just weeks later on November 13th, 2019 he was back at it, ridiculing Marvel and Pokemon fans, the latter due to their discovery that Gamefreak had reportedly lied about the reasons as to why all the Pokemon couldn’t make the cut in Sword & Shield.

after today I can no longer tell if Marvel or Pokemon fans are the worst kind of nerds online. I thought I had this shit figured out. I stand corrected

On January 31st, 2020 he also had a tweet making it known that he’s against those who stand against Social Justice propaganda.

congrats anti-SJW YouTube on bringing attention to vtuber demonetization and helping to get their monetization reinstated. the first thing you’ve ever done that isn’t a waste of everyone’s time

But to top it all off, puffketeer has pronouns in his Twitter profile, which should tell you everything you need to know about him.

It should then come as no surprise that he has me blocked on Twitter. 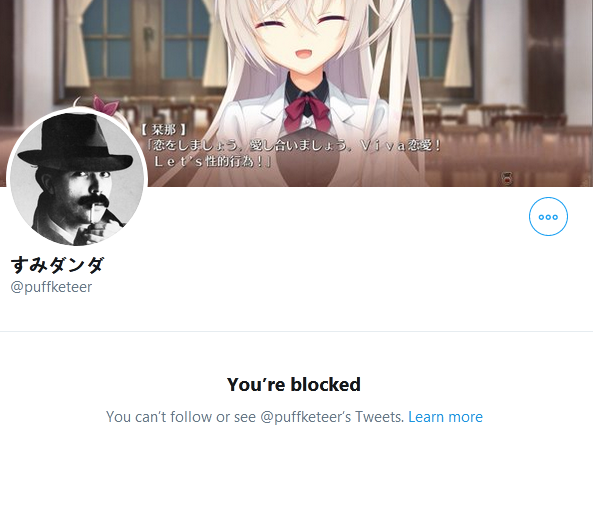 This helps to further shine a light on the TwitLonger post made by an ex-MangaGamer translator back on October 23rd, 2019 who outlined the difficulty of working at MangaGamer for low wages and how project managers were practically non-existent.

Many of the staff have multiple roles, but some of the people fulfilling those roles are basically the sort of people who hate gaming culture and fans of H-content. It seems like a combustible combination to have people on board who hold antagonistic views toward their own audience while translating content for that very same audience.

Now, just because some of the people at MangaGamer holds these inimical views toward gamers doesn’t mean everyone does. One of MangaGamers members, Doddler, has on multiple occasions informed the larger audience about Valve banning certain visual novel and anime-themed games from Steam.

However, if the general sentiment among most of MangaGamer’s staff is that they despise their own audience, then it doesn’t look good for the company’s future.