It starts at the 4:25 mark in the episode, where Alucard is laying down to go to sleep. The context is that he’s been lonely living in Castle Dracula until two Japanese siblings come to him for training to kill vampires, and to learn how to move the castle. The twins have ulterior motives, though, and they hatch a plan to kill Alucard after seducing him.

They come into his chambers and undress. 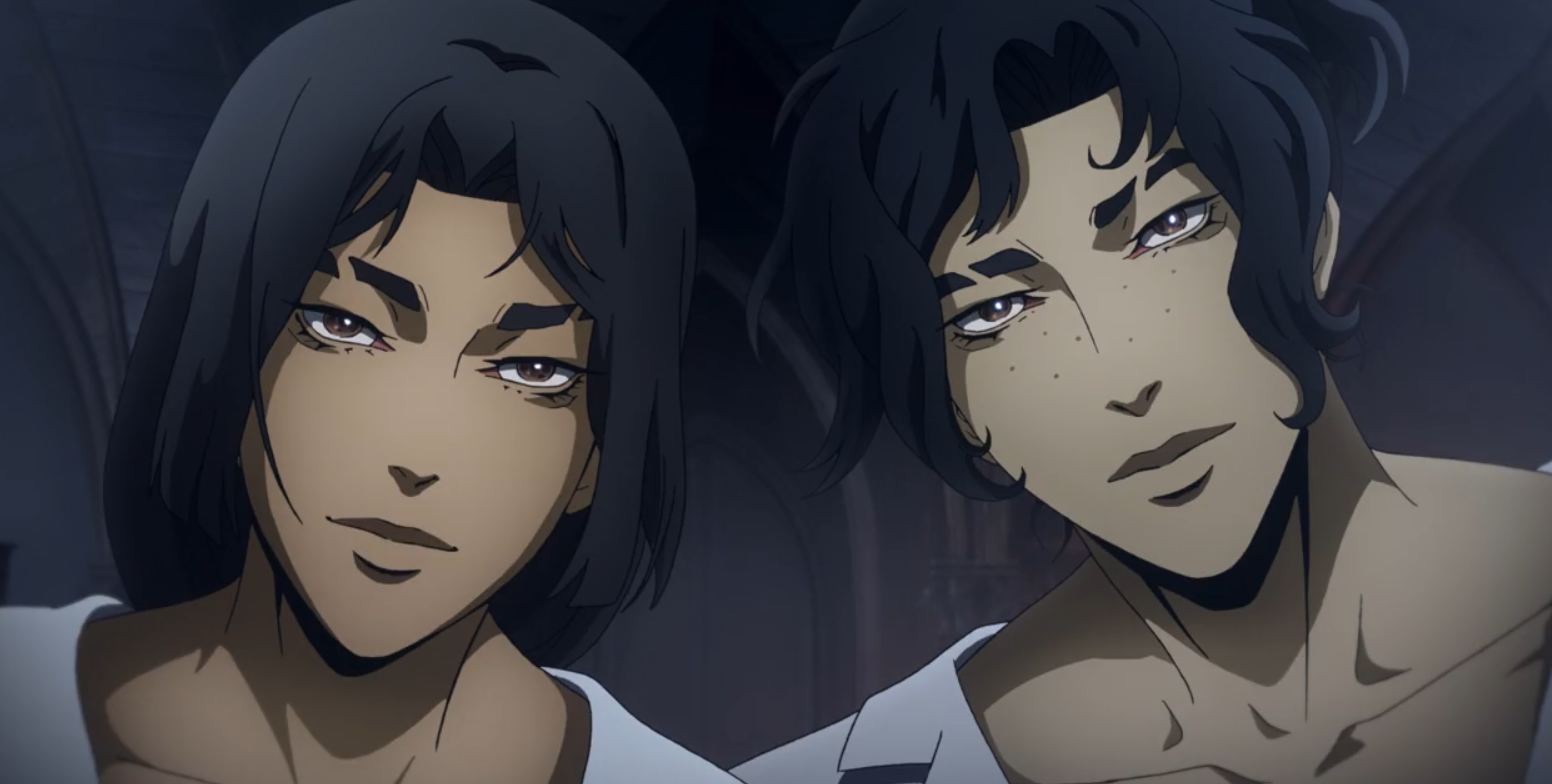 The scene starts with the twins kissing on Alucard’s chest and lips, both of them taking turns.

Between the action sequences taking place throughout the episode we jump back to the sex scene around the 8:45 mark, where  they cut back to Alucard placing his lips on the skin of the twins, while also gently caressing them.

It then sees the female twin going down on Alucard’s nether regions, implying oral sex. 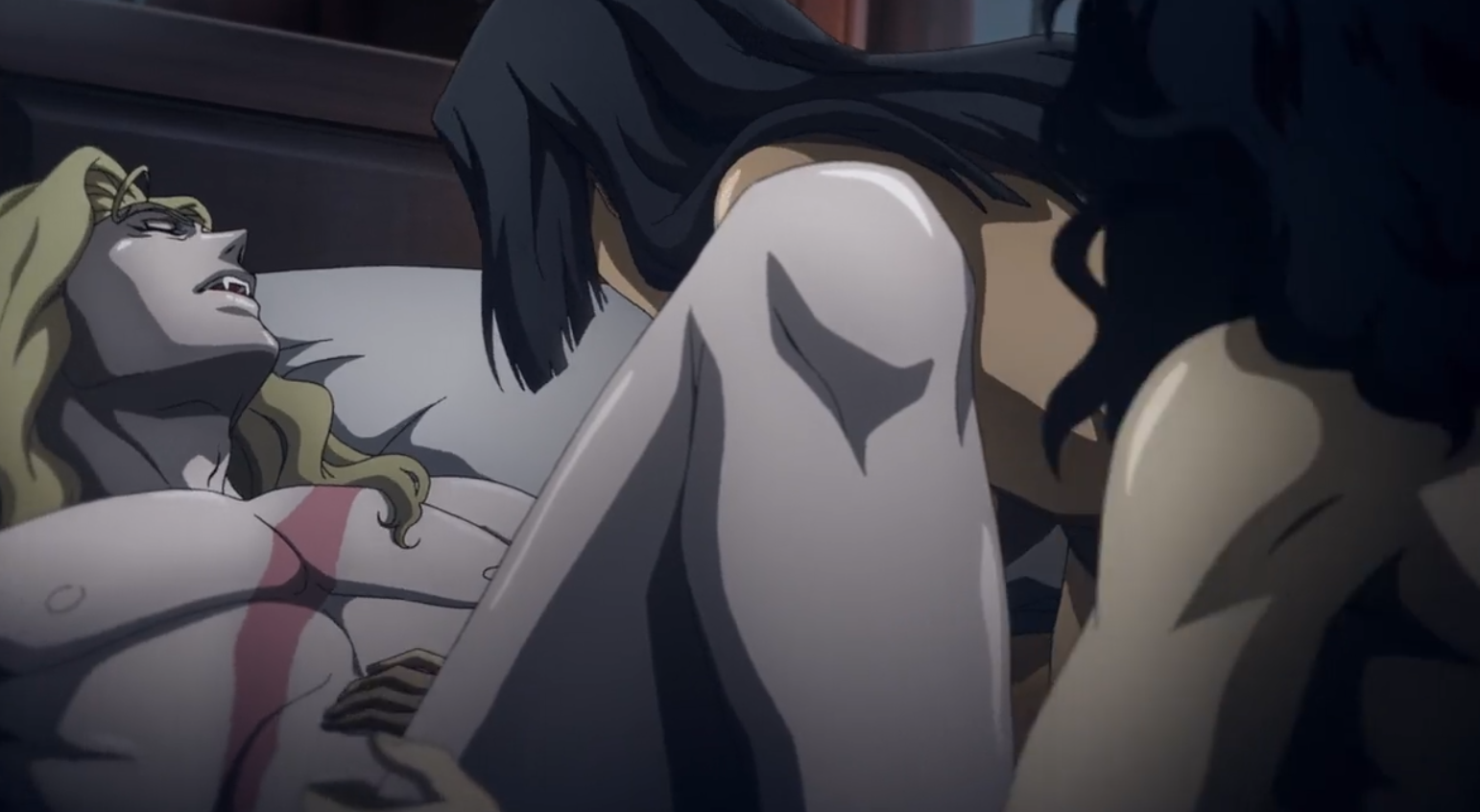 At around the 16:19 mark we see the female twin stimulating Alucard’s genitals with her hand while her brother appears to be giving Alucard anilingus.

However, things take a turn for the worst at the 16:29 mark, as the male twin hoists Alucard’s legs on his shoulders like some poor, pallid maiden in a Blacked video. 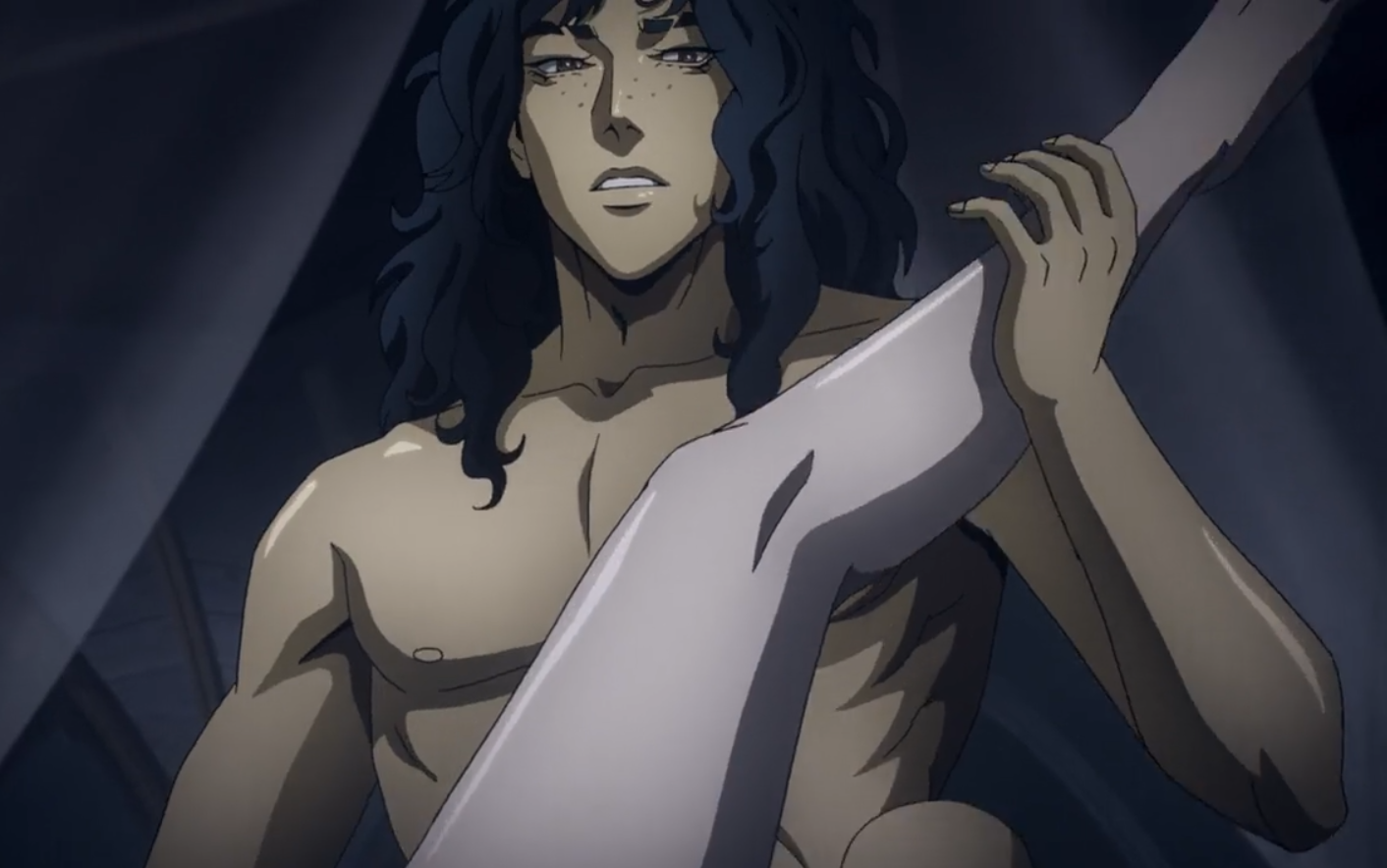 He mounts Alucard in a missionary position while Alucard winces and cries, likely because there was no lubrication involved and the pain was too much for him to bear. This is also one of the leading causes of sexually transmitted diseases among gay men, since stretching the rectal linings without lubricant oftentimes creates tearing, which in turn causes bleeding. The transmission of bodily fluids through the urethra in an unclean region like the rectum can result in contracting a disease or giving the recipient an unwanted infection.

Nevertheless, the male twin finishes off Alucard, and shortly thereafter his sister takes one last turn on the blonde-haired vampire before they hatch their plan. 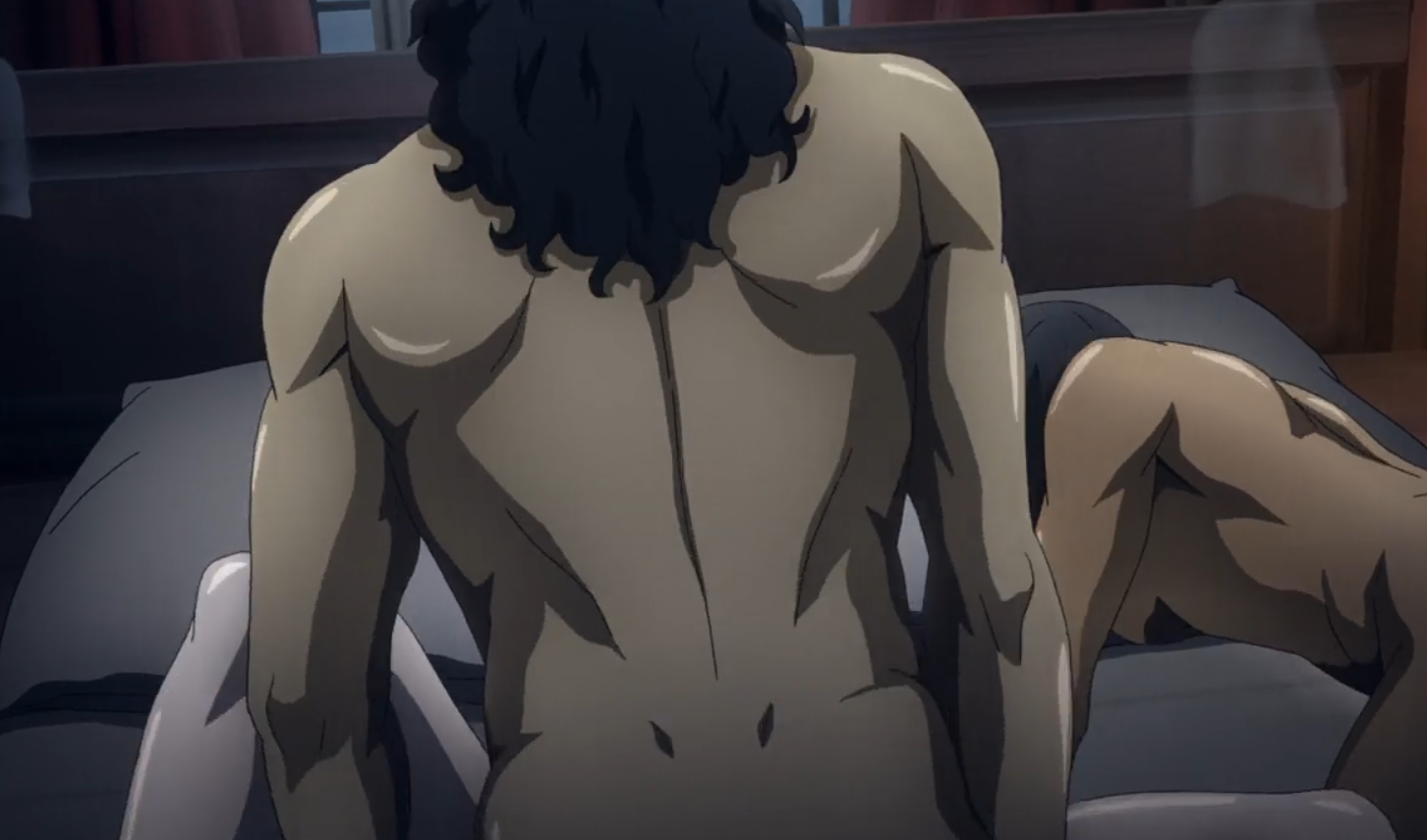 Basically, Alucard is no longer the hero or icon you thought he was.

The Dhampir’s dung-hole was desecrated and systemically destroyed by Liberal Progressive propaganda; fueled on by everyone pushing for the gay agenda to take over every single aspect of media entertainment you enjoy.

In fact, according to the CDC, men accounted for more than 90% of all cases of primary and secondary syphilis, and 54% of those cases were men who strictly had sex with men. 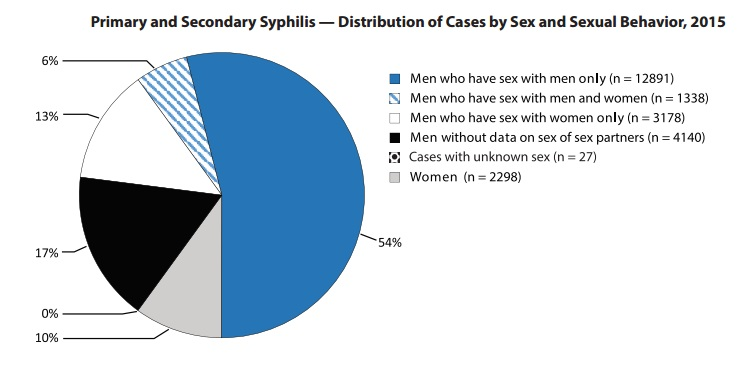 The most damning thing about it is that this data has been scrubbed from the CDC website. If you attempt to download the PDF for the CDC stats, it’s no longer available. If you check the Wayback Machine for the most recent entry relating to those statistics, you’ll only get a 301 error for that particular page.

[Correction:] The quoted PDF stats can be found in the archive section on the CDC website at the following link.

Thankfully, the Wayback Machine still has the data available from a November 8th, 2016 archive, so you can read all the stats for yourself.

The hilarious part about it is that even while they attempt to rewrite the science and bury the facts, the CDC still has to admit that among gays, sexually transmitted diseases are far more prevalent than with heterosexuals, with the site stating…

“While anyone who has sex can get an STD, sexually active gay, bisexual and other men who have sex with men (MSM) are at greater risk. In addition to having higher rates of syphilis, more than half of all new HIV infections occur among MSM. Many factors contribute to the higher rates of STDs among MSM”

It’s no different than what they’re doing with drag culture, drag story time, and the constant implementation of LGBTQIA+ content in children’s programming.

The idea is to make people think that it’s a-okay and that if their favorite video game characters engage in sodomy then why can’t they?

It’s the same as constantly peppering audiences with LGBTQIA+ relationships everywhere, even when they barely make up a percentage of the population. They’re over-represented in media, yet they keep claiming they need more representation. Heck, GLAAD is literally trying to force  companies to make 20% of all characters gay!

It’s why you see pointless lesbian relationships in shows like Castlevania where they attempt to normalize androgynous-looking, butch lesbians to distill anyone from finding them attractive but to encourage everyone to think it’s “normal”. 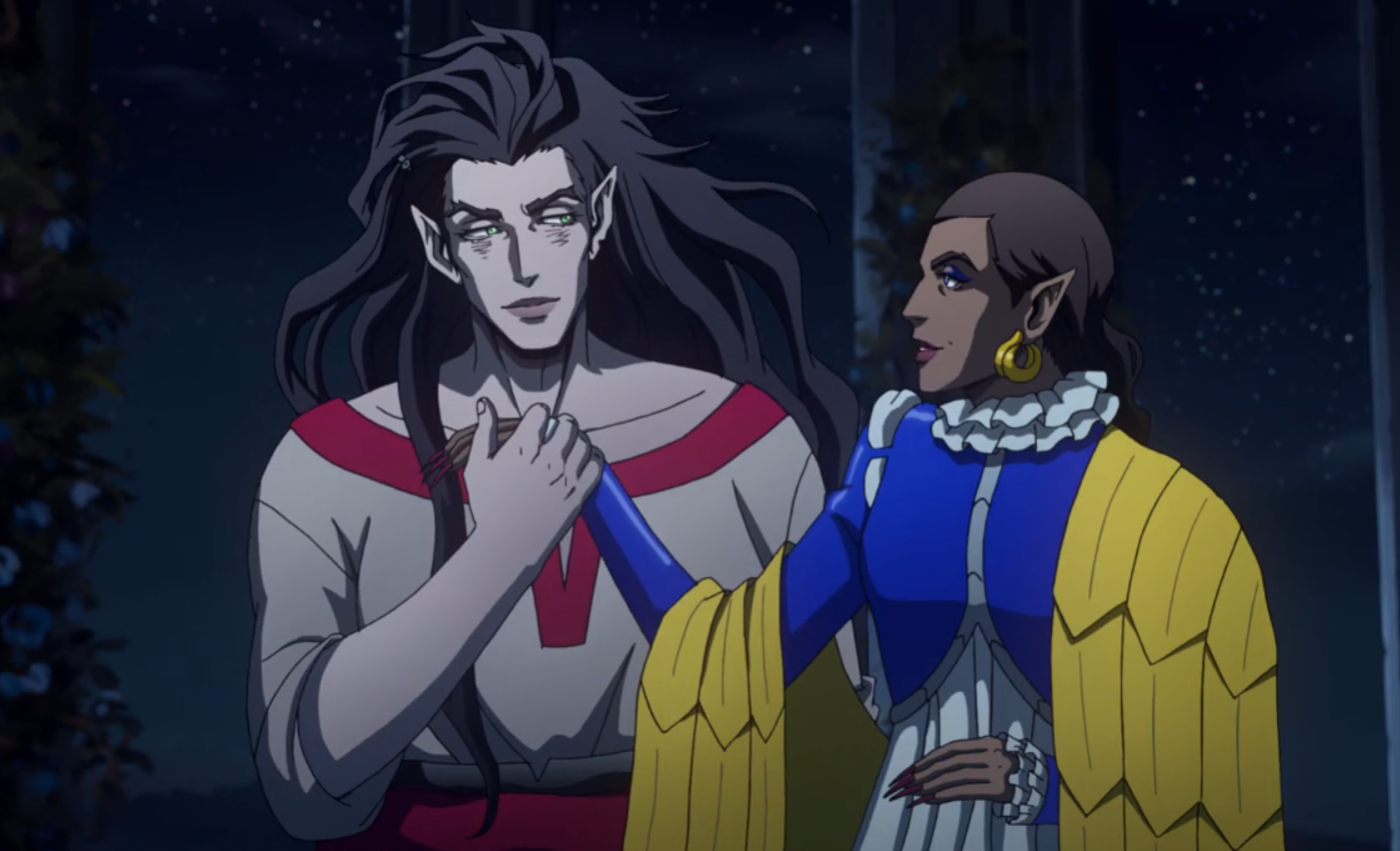 What’s more is that the writer for the Netflix show, Warren Ellis, admitted he’s never played any of the Castlevania games. So his involvement with the series is purely for propaganda purposes and nothing else.

Go Nintendo picked out the relevant quote from Gizmodo, where Ellis stated…

“There were certain pieces, I did cherry-pick from different bits of the games— so, if you’re extremely well-versed in Castlevania lore then you will see things you recognize being draw in from places in the canon. If, like me, you’ve never played the games, it won’t make a blind bit of difference to your enjoyment of the thing…I’m just making it up as I go along. It’s fine!”

This is all part of their agenda.

They won’t stop here, either.

But it’s too late now. Alucard’s already been screwed, both figuratively and literally.

His anus will never be the same.

(Thanks for the news tips Dr. Plague and Gemma Ham)