Unbelievable. Nintendo of America has been stepping across the line onto the wrong side of history lately, especially when it comes to localization and advertising partnerships, the latter of which can best be exemplified with their distasteful ad campaign involving the much derided celebrity, Brie Larson.

The Captain Marvel actress has been promoting Animal Crossing: New Horizons on her Instagram account, as covered by Go Nintendo.

#ad Already obsessed with #AnimalCrossing: New Horizons! I’ve missed Tom Nook so much! 🥰 If you are looking for sweet ways to spend time at home, I highly recommend you grab your #NintendoSwitch and escape to your own island getaway🏝Now, who has iron nuggets they can give me? @nintendo

So how do we know it’s an ad? Because by enforcement from the Federal Trade Commission, all social media posts that are blatant advertisements must reveal that they are indeed paid advertisements. This came after a fervent campaign from #GamerGate to get the attention of the FTC in order to have them to crack down on advertorials and sponsored posts that were being either hidden or not properly disclosed by major media outlets. The campaign was successful, and many YouTubers, socialites, and media websites began updating their privacy policies and adding disclosures to their content.

In this case we see that Brie Larson added the #ad tag to her Instagram posts, indicating that she was paid to advertise Animal Crossing: New Horizons on the Nintendo Switch.

This means Nintendo of America’s marketing department paid to have the Captain Marvel actress spread the word across social media. 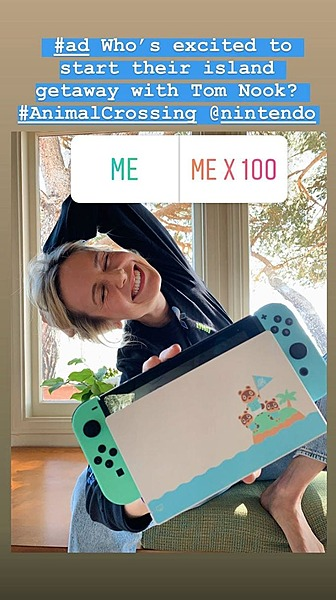 Larson told People Magazine that she had been gaming with Nintendo products since the GameCube days, so she’s only been with Nintendo for four generations. That’s not even that hardcore. Larson stated…

“I’ve been playing the game (New Horizons) I think since Monday by myself and I’ve had nobody to be able to talk to about it. It’s been really sweet to have this special time with it to figure it out on my own.

“The original game, the first time I played it was on Nintendo’s GameCube and it was just so important to me and my sister. My mom set up a rule: whoever finished their homework got to play first. It was an amazing tool to get us to finish our homework.

“…I’m so excited to make new memories with my sister [Milaine Desaulniers] again. We’re adults now and yet we still just have such a deep love for this game and it’s been really fun to talk with her about it. Given the circumstances, we can connect via the Internet and go to each other’s islands while we’re FaceTiming and communicate about this. It’s just sweet.”

Go Nintendo also pointed out that in the interview, Larson said that she would definitely be willing to star in a movie about Animal Crossing if given the opportunity.

For those of you who don’t remember, Larson promotes and represents current day feminism, which is all about misandry. She also advocated for fewer white male critics to review Captain Marvel, which would have been deemed sexist and racist had her request been inverted and she requested fewer black female critics to review her movie.

She also attempted to ride the media wave claiming that it was sexist when Turd Flinging Monkey gave her a smiling makeover in the promotional images for Captain Marvel.

This is who Nintendo decided to partner with to promote Animal Crossing: New Horizons.

I’m sure cuckolds and simps will attempt to claim “Well, they wanted a popular celebrity and there’s no one else!”

Bullcrap. They could have paid any number of ‘A’ listers out there to hold a Switch and convince people to go out and buy Animal Crossing: New Horizons. Heck, they could have acquired the services of Zelda Williams if they wanted someone who regularly plays Nintendo games, as opposed to paying someone who supports misandry to represent the company.

That’s not to mention that Nintendo’s localization team in charge of the English version of Animal Crossing: New Horizons removed the male and female gendered identifiers from the game during the character creation process, further proving that Nintendo’s Treehouse is converged.

(Thanks for the news tip Kamil Drews)