[Update 3/15/2020:] Patreon issued a statement regarding the bans, but opted not to further clarify how they determine what anime characters are classified as “minors”. The bans are still in effect and will continue to roll out on art that the Trust & Safety staff feel “sexualizes minors”.

[Original article:] Patreon has ramped up their bans, going from nuking fringe fetishes to prohibiting mods for games like Koikatsu Party and Emotion Creators, and now banning lewd depictions of Japanese-style anime characters for looking like “minors”.

Twitter user Bob BQ posted a message from a content creator named Waero, who informed his audience that he will no longer be able to provide art in a Japanese anime-style because Patreon deemed it a depiction of sexualizing “minors’. His account is currently down for “maintenance” at the moment as he removes links from his Patreon account to accommodate the requests of the Trust & Safety department.

An image from the post was made available to public on March 12th, 2020.

What the fuck is this shit??? #anime is basically all under age now #patreon? Do you not think for one moment that this is totally lacking any common business sense? If you don’t want to do business with independent creators, just come out and say it. pic.twitter.com/6af7MjfNFq

If you’re unable to view the text in the image, it reads…

“Hi everyone. Due to the recent notification from Patreon, I am working with the official staff to adjust the content these days. So the user will be suspended for a few days until the correction is completed, but don’t worry, this pause is only temporary.

——————–
1. Regarding the first point, basically all Japanese styles can be said to be out. As long as you are Japanese style, even if the character has a big breast, the official said that it will be classified as a minor, so I had to delete 90% of the articles on Patreon.

Although this adjustment does not affect the rewards you ultimately receive, it will be a bit regrettable that you cannot directly see the update in advance on Patreon, and I will try to improve this later. (For example, look for other platforms to showcase these works.)

“For example, if your Twitter or Pixiv has a Japanese-style suspected underage type work, Patreon will prohibit you from placing a link to Pixiv on Patreon, and you will also be prohibited from placing a link to Patreon on Pixiv. Is considered a violation. Because of this, I have no removed all links and asked users to search for “Waero Patreon” or “Waero Gumroad” to ensure that the source of the traffic cannot be traced.

—————-
Since it will take me a lot of time to adjust the above content, it may take a few more days for Patreon to resume normal operation, and I may release the latest news of the creation in other ways in the future. After Patreon resumes operations, a new article will be posted to announce the relevant details.

“I will continue to complete the animation update this month, and the reward will still be sent normally every other month.” [sic]

[Update:] Waero also followed up with a tweet and a message from Patreon further explaining the company’s position on “Japanese-style” drawings.

In my country, we are used to calling some anime styles Japanese style.
It may mean something else in other countries, but you should know what style it is.

Not necessarily Loli, and neither big butt nor big breasts is a criterion.

Here is the official reply: pic.twitter.com/7Oa8LiKjkq

If you’re unable to read the message in the image, it states…

“Some details like a big head, big eyes, and short height can make the characters look younger.

“And, regarding body development, having bigger breasts and larger hips makes the viewer understand that the character is not a child, but they can still be teenagers under the age of eighteen as a lot of women have those puberty transformations at a very young age.

“In order to make them look like adults, the face is the most important part – so even if it’s a stylish option to make your characters look innocent and sweet, you should always bear in mind that this also makes them look younger.

“I understand you might question our point of view on this subject, but I can guarantee you that I consulted with my team before contacting you, and it is consensual among us that the characters I asked you to remove look like teenagers under the age of 18.”

This isn’t some plea for attention or a troll.

Other Japanese artists also chimed in to note they received similar messages.

Kakuume, a female artist, corroborated Waero’s announcement about Patreon cracking down on anime-style drawings. Kakuume shared a message that her Patreon had to be closed because they determined that it wasn’t just loli characters that were deemed to be minors, but all anime characters looked like minors.

Me too! I was unsubscribed because of this. pic.twitter.com/DDoZzyFRTG

Patreon is putting Japanese artists through purity tests and demanding access to all their online art stashes to ensure that they aren’t making money on delivering art to patrons that contain characters they’ve determined to be “minors”.

As invasive as it sounds, the details were laid out by Kakuume over on the Baragg.net fork.

A Centrist™ tried arguing that Patreon was just axing loli content from the platform, but Kakuume shared an image from Patreon’s staff, asking for access to her Google Drive to verify none of the images violated their terms of service. She also pointed out that some of the characters contained large boobs and were obviously not lolis, but Patreon still considered them to be in violation of their TOS. 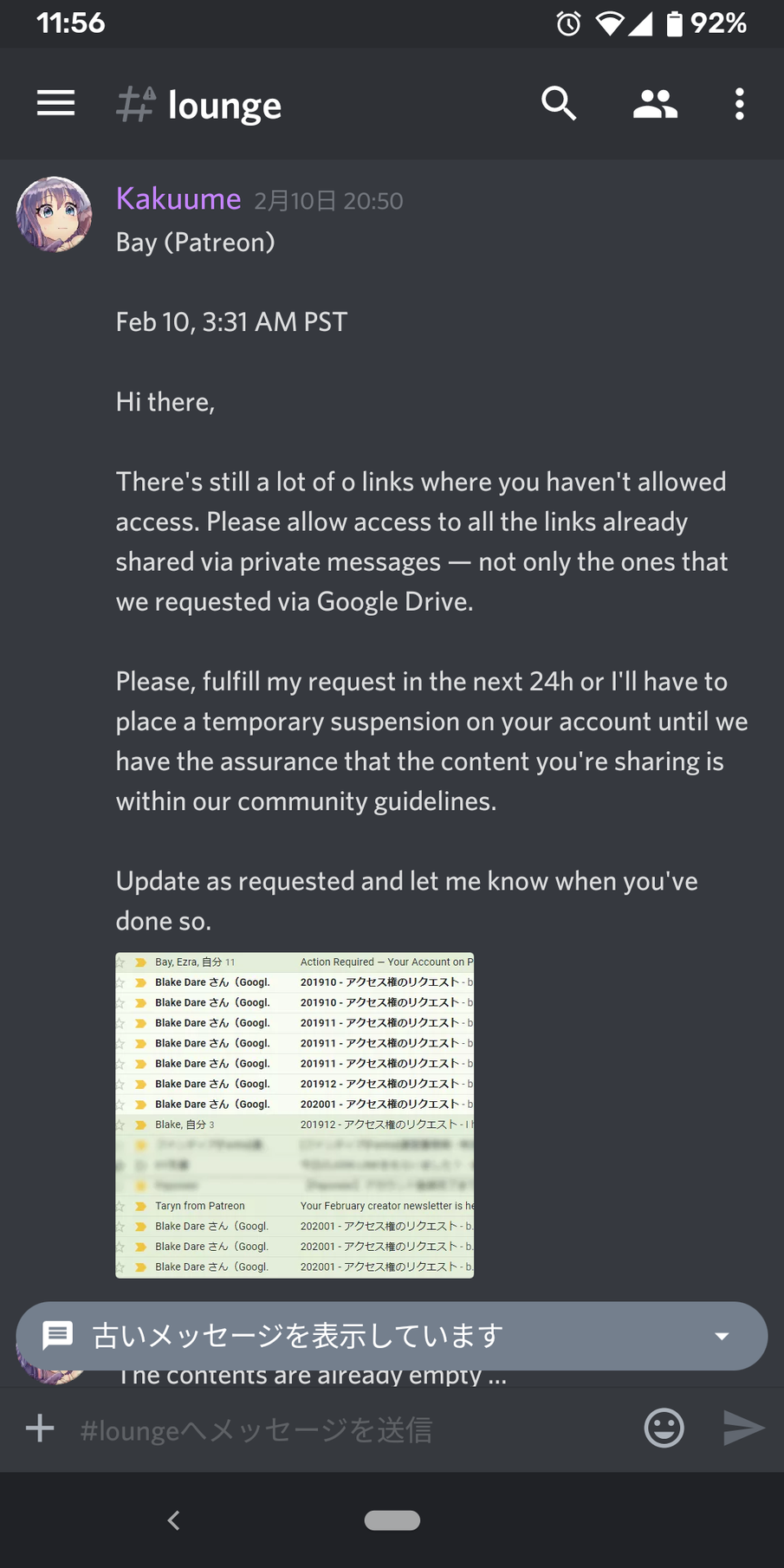 If you’re unable to read the text in the image, they state…

“There’s still a lot of o links where you haven’t allowed access. Please allow access to all the links already shared via private messages – not only the ones that we requested via Google Drive.

“Please, fulfill my request in the next 24h or I’ll have to place a temporary suspension on your account until we have the assurance that the content you’re sharing is within our community guidelines.

“Update as requested and let me know when you’ve done so.”

So basically Patreon is going through all associated links and web storage services to ensure that Japanese artists aren’t allowing people to view lewd images and contribute to their Patreon account.

For those of you who don’t remember, Patreon monitors users’ off-site content, and will hand out bans based on what they say, write, or do on other social media services. Content creators such as Mister Metokur, Sargon of Akkad, and the Straight Pride organizers all had their accounts banned for ideological reasons.

Even those who didn’t share or engage in politics, were targeted for creating content that Patreon’s staff didn’t like, which is why they targeted Lewd Logistics and made it known they would be shutting down his account because they stated his art depicted acts of a non-consensual nature.

Many are saying that this move from Patreon will result in them going the way of tumblr.

So far there doesn’t appear to be an official rule about “Japanese-style” art in their terms of service, but expect them to keep banning or enforcing censorship of content on the grounds of “exploiting minors”, which is what Valve’s software curators did to ban anime-style games they didn’t like.

Some Centrists™ are already running to Patreon’s defense, claiming that they’re only banning artists and art that “exploit minors” while completely ignoring the fact that it’s all fictional characters and they have no real ages. So basically every anime character depicted in a lewd manner could be considered a “minor” according to Patreon’s Trust & Safety division.

One of two things will happen: Patreon will either renege if they receive enough public backlash, or they will double down and start purging Japanese artists from the platform, not unlike when Twitter came down on artists for lewding lolis.

Some users are already suggesting Japanese artists move over to SubscribeStar or New Project 2.

(Thanks for the news tip Tim at Where)