Videos have emerged of the gore system in the Resident Evil 3 Remake demo, and they have revealed that the gore and dismemberment has been downgraded compared to the gore featured in Resident Evil 2 Remake.

YouTuber Arın Belenlioğlu posted up a video comparison between Resident Evil 3 Remake’s demo and Resident Evil 2 Remake, showcasing how the gore and dismemberment has been lessened in the newer game.

Some of the people in the comment section are trying to justify the censored downgrade, claiming that it doesn’t affect the gameplay, therefore it’s not important.

However, according to Resident Evil 2 Remake’s game director, Kazunori Kadoi, he told Complex in an interview published on January 24th, 2019 (that’s for some reason no longer available) that the gore was an essential element for creating the kind of immersion necessary to make every bullet feel important, and in-turn, affect how players strategically pick apart enemies, saying…

“Gore is a visual tool that gives that extra level of realism and visceral tension. When the characters and enemies are inflicted with physical damage and it’s depicted in a very real and detailed manner, it makes the situation and threat that much more real. This in turn allows the player to get more easily attached or involved in the narrative and environment.

“The more immersed and attached the player is, the more scary and impactful it’ll be—whether running into an adversary, or simply walking through an empty, dark corridor. And that, of course, is one of the main goals we always want to achieve in a survival horror game.”

So yes, the game director directly rebuts any of those Centrist™ arguments attempting to justify the downgrade by saying it’s not important to the gameplay.

Another video from Random Madness also highlighted the downgrades as well.

In the video, we see that only one limb falls off the zombie.

The limbs no longer linger around with ragdoll effects.

You can no longer continue to dismember a zombie after they’ve fallen or lost a limb.

Bloodstains are no longer persistent within the instance.

Bodies also no longer ragdoll once they’ve been set to the “dead” state.

This is quite different from the way the “wet gore” was utilized in the RE Engine for Resident Evil 2 Remake. You can see the video below to understand just how downgraded the gore is in Resident Evil 3 Remake.

As you can see right off the bat, the “wet gore” is utilized right away when Leon blasts the lower half of the zombie’s head off and when the zombie is on the ground he completely dismembers the zombie’s head with a shotgun blasts that sends reflective blood spillage onto the floor along with gibs.

Also notice how even when zombies fall, they still slightly jiggle and react from being peppered with gun fire… even from the pistol.

You’ll also note that the liquid shader gloss that was present in Resident Evil 2 Remake has been turned off in the demo of the Resident Evil 3 Remake, thus making the gore and viscera look less like they’re covered in liquid. 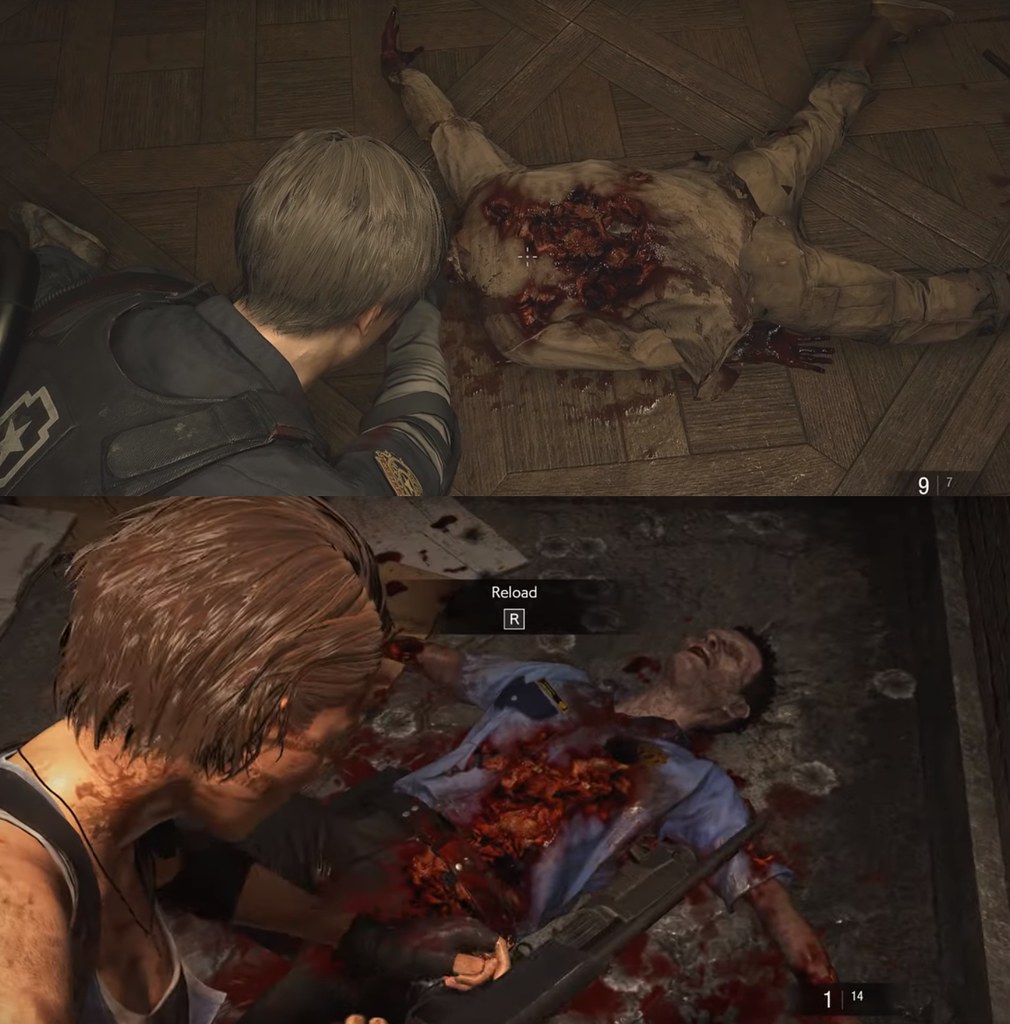 You can see that the reduction in specular maps across the gore mesh also means that it doesn’t look quite as realistic, especially with the lower resolution texture maps.

Now before jumping to conclusions, it’s completely possible that the “wet gore” was reduced in the demo of Resident Evil 3 Remake to cut down on the file size of the demo. Culling UHD gore assets, ragdoll systems, and gore geometry may have helped with keeping things compact.

Keep in mind that according to Windows Central, the demo clocked in at around 7.47GB. So it may have been Capcom’s way of compressing down the data so as many people as possible could check out the demo.

Now typically some Centrists™ will say “So why even discuss it in the first place if it’s just the demo?!” and the very logical and necessary answer is actually a question: Because what if it’s not just the demo that has reduced gore?

Again, it’s completely possible that it is the demo, and extraneous assets were culled to maintain a smaller filesize. It’s also possible that they actually did decide to tone down the gore, which is something we’ve seen in some other violent game series in recent times, with Gears 5 being a prime example.

Some of you might be asking “Why would Capcom tone down the gore? That doesn’t make sense!” but it is possible that they wanted to avoid the Mortal Kombat conundrum, where YouTube was penalizing videos that showed any of the blood or gore, as discussed by RGT 85.

Having fewer people play or talk about or showcase the game means less saturation in the market spread of the product.

I’m sure some of you are already thinking “But the Resident Evil 3 Remake demo still contains blood and gore!” and it’s true, it does. But as mentioned above, the gore is reduced. Blood stains are not as pronounced, so it’s possible it may not be tagged as frequently by YouTube’s content AI as it was before. And as mentioned, the reduction in shader gloss or specular highlights along the mesh edges to emanate the “wet gore” effect has been removed, so it’s also less likely to trigger’s YouTube content ID filter. However, all of that is complete and utter speculation on my end.

[Update:] Some have suggested that the toned down gore could be due to the demo having global content parity, and the demo being based on the Japanese content. Now this is a good possibility given that Japan’s CERO system is harsh on games with gore, and so many of their games tone down overt goriness and dismemberment.

Those are just some possible reasons why the gore may have been toned down. Furthermore, we won’t know for sure if the gore has been completely reduced until the full version of Resident Evil 3 Remake launches April 3rd for PS4, Xbox One and PC.

(Thanks for the news tip VenturourGamer)