In general, I’m a sucker for a zombie game. Where the mainstream has grown tired of the genre, I still find a pleasure in matching wits with the zombie apocalypses and threats it brings. When done right the experience can be many things from emotionally engaging narratives, to over the top tales of survival. A philosophical look at humanity or a challenge to overcome a nearly unstoppable opponent as the luxuries we once enjoyed dwindle and fail.

There are many things a zombie game can be when done right, but State of Decay 2 is not done right. Mechanically the game is entirely half baked with no real connection between your actions and the state of the world. The infected spawning system makes sure you understand well that what you are doing is entirely a pointless endeavor as you drag yourself towards the completion of your objectives.

Multiplayer though, owe it was by far what I looked forward to the most to chill with a friend, and ultimately what disappointed the greatest. From a design that renders the experience itself pointless and boring to a horde mode that is outdone by decades-old games. The entire experience is just a disaster that the improvements the Juggernaut Edition delivers cannot compensate for.

+Vehicle Handling
+Visuals were occasionally breathtaking
+The night is night, not day with a dark filter
+Solid weapon handling

-Spawning system
-Spawning to blatantly cheat the player
-All your actions are ultimately meaningless
-You can’t sleep through the night
-Base building is still half baked and poorly thought out
-Overt representation politics
-Zero femininity every woman is a man with a vagina
-Multiplayer is half baked
-Horrible Horde Mode
-Horde mode introduces a device that draws zombies to it. For some reason we never utilize these devices to round up massive hordes of zombies and then take them out with artillery, bombing runs or helicopter fire.

State of Decay 2 features massive levels of representation. With a gendered breakdown of roughly 70-30 female to male, nearly every position of power in the lore is occupied by a woman. Head of a mercenary company is female, settlement heads are more often than not predominately female, and not one of these women will feature the slightest hint of any feminine attributes. Half the few male leads are either incompetent or cowards. With the sole exception coming to mind is the black Christian pastor who you hear on the radio every so often and a lower-ranking member of the Red Talons. 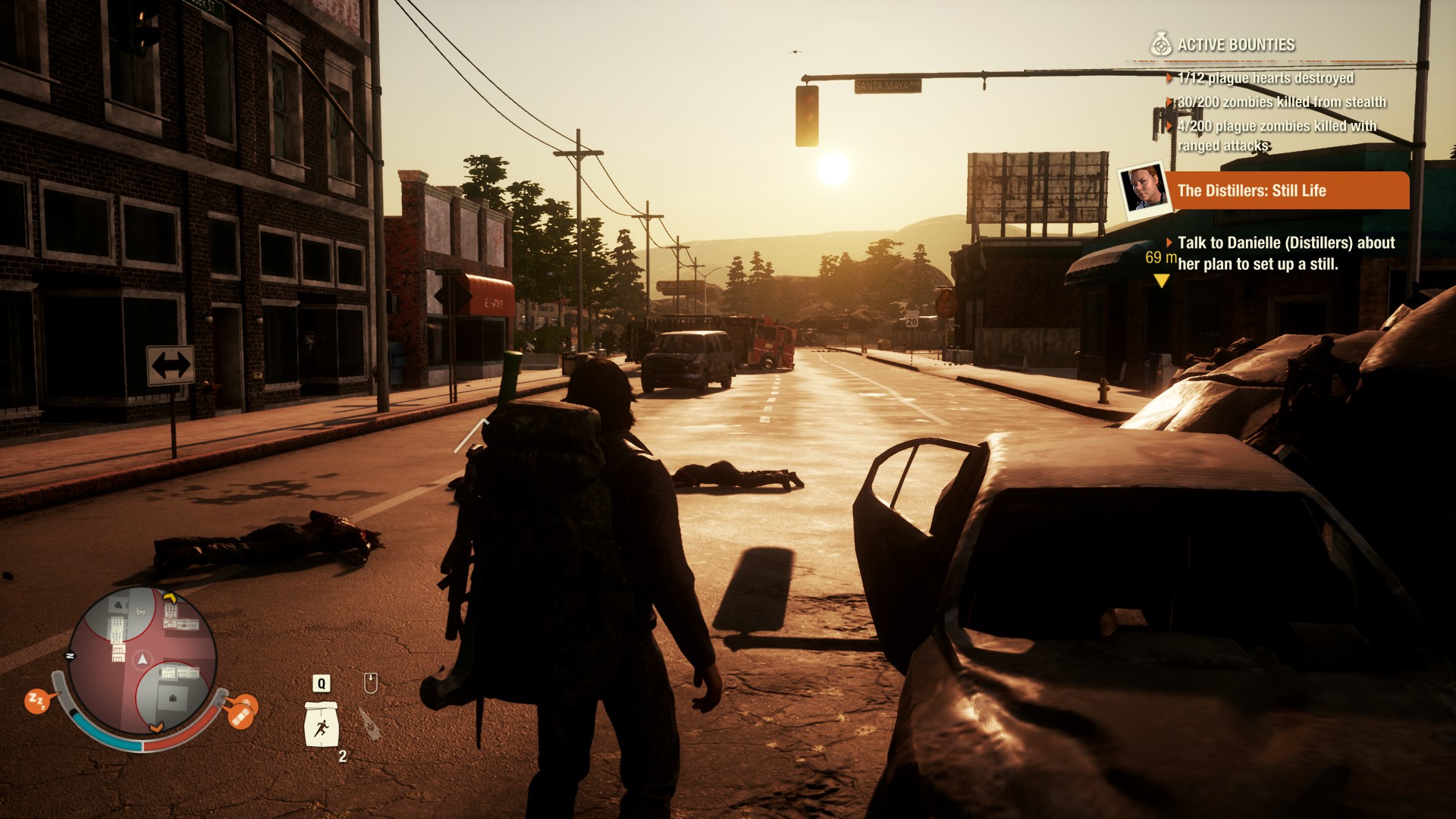 Decidedly it is easy to infer there is no recommendation coming for this game. The core mechanics are half baked, the multiplayer leaves you imitating the Angry Gamer Nerd asking “What the fuck were they thinking?” Worse of all nearly all your actions are entirely acts of meaningless futility as you drag your way to the “completion goals” of removing the plague hearts and establishing your legacy.

Before tackling the bad of which there is much I’d like to discuss the good. For starters, the vehicle handling felt vastly better than I felt it had any right to be. It was responsive and functioned smoothly except for the vehicle’s weak damage limit, absurd fuel consumption, and disagreements with rocks. Still, there was a moment I would in the pitch blackness of night return to my transport and look in the flashlight at the glimmering blood and scuffs, dents, and scratches and at that moment there felt a true depth to the world. Even if it was a brief one.

Graphically the world isn’t going to blow any minds. It feels dated even with the Juggernaut upgrade, but visually it has its moments. Sometimes the light is breathtaking and you’ll stand there appreciating it for a few seconds. Gore is pleasing overall without having to go into full Baphomet levels of shock value. Then there are few moments here and there you’ll appreciate, nothing spectacular, just small moments where the scenery and environment come together just right. They won’t be many, they will be far and few in-between, but it is rare they happen in gaming period so they are noteworthy. 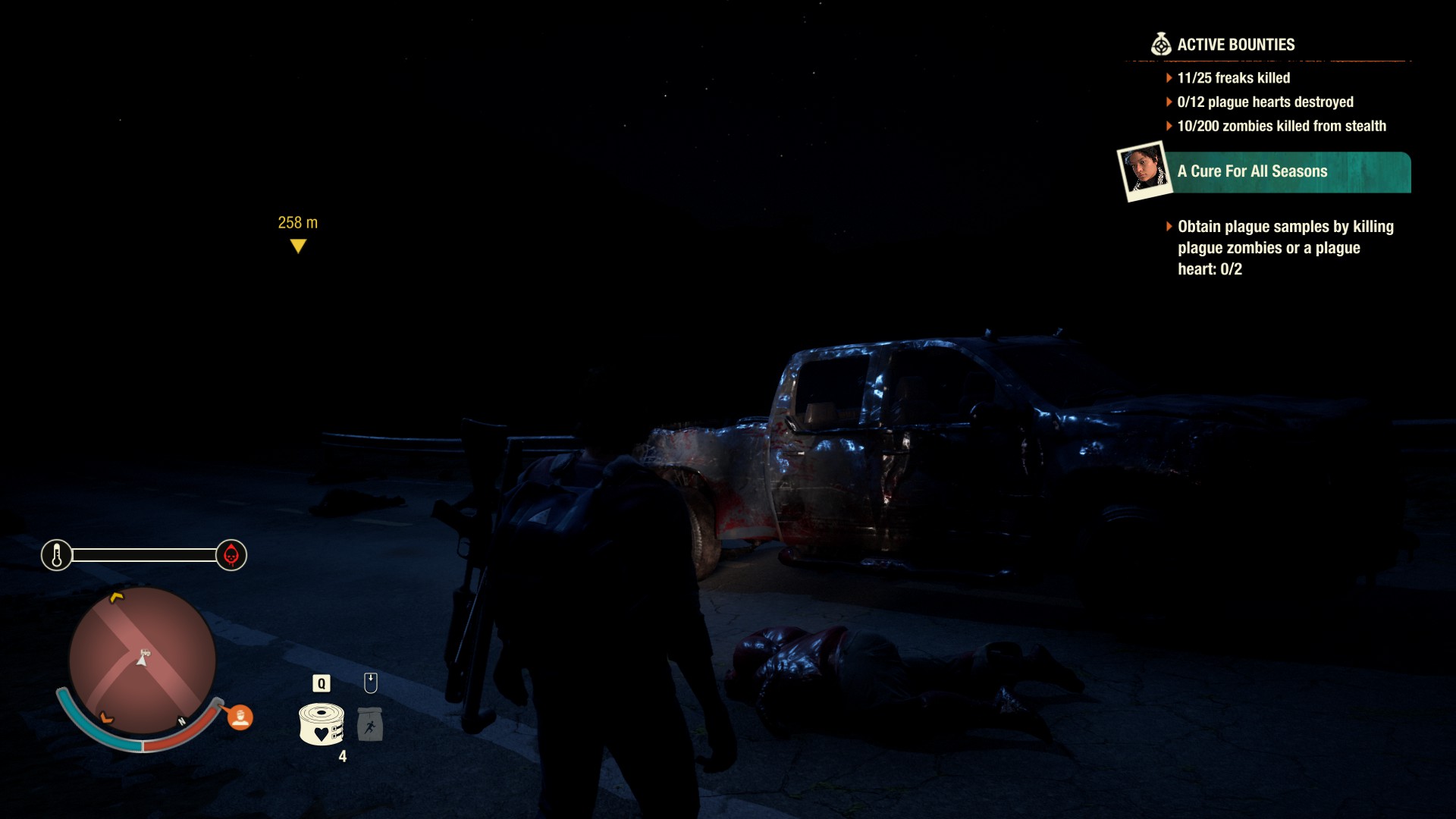 Weapon handling is very responsive unless the enemy gets right up in your face. Then you will have no other choice but to either dodge and aim again or switch to melee combat. Aside from that shortcoming, the overall mechanics are smooth.

With that pleasantry out of the way let us delve into the bad.

The game itself is a poorly thought out mess. I always drew objection to the original’s limited and quite frankly poorly thought out base-building mechanics, but in the sequel, it takes it to a whole new level of stupid. In the plateau map, you will start in a house on a hill next to water and surrounded by a cul-de-sac. Now the logical thing to do would be to expand a wall around the neighboring houses and turn the hill into a proper fortification. It by far is one of the most defensible positions on the map and the readily available water resource nearby gives it an added advantage.

Not only can you not do that, but you cannot make use of garages or campers that often sit right adjacent to your settlement. You can establish outposts for various benefits, but these are limited to your command center level and by a distinct no fun allowed rule. You will never feel as if you are retaking the area or building up a meaningful presence. Slowly as time goes on you’ll move to another location and then again to the final location when you have enough influence and people. Both of which take more time then they should to accumulate.

Do not expect these bases to feel lived in. You will never return to see your cook whipping up rations, people welcoming you home as they go about their routines. It will eternally feel like a live service base and with all the timers and limitations in this game it feels like a game was designed to be a live service then had the mechanics pulled at the last minute. Imagine a lifeless system that encourages you to spend money to get things done faster rather than experience the meaningless tedium and that describes the base management perfectly.

Now, this could be mitigated as a minor downside, a failing we laugh about and look forward to them fixing in the sequel if the game’s world was responsive. Of which it is not only is not, but actively flips players the bird. Imagine traveling halfway across the map wasting fuel and resources to clear out infections, aka groupings of zeds that are lead by one or two screamers. Afterward, you return to your second base only to have infections once again pop up in the same locations you just cleared out.

Keep in mind during this operation one of the screamers drew in every zed in the area. It was a bloodbath before it was over and you did not emerge from this smelling of roses and sunshine, but you did emerge. There should have been nothing left in that area of the map to pose any threat for some time and then the respawn system laughs in your face and drops infections once again in the same area you just cleared.

Wipeout two hordes near your base? Enjoy two more. Kill two Juggernauts? Well, now there is a third one. From where? Absolutely nowhere. Carefully cleared out the area around the plague heart? Well, infinite spawning means you were a chump in doing so. There is no point to any of your actions, nothing to be ultimately gained from your accomplishments as there are no accomplishments.

The loop is a failure, loot to build up a base you cannot build up. Use the resources to fend off zeds and freaks that will just respawn in the same area. Kill Freaks to make an area safer to have them spawn again the next time you drive through.

Multiplayer should have been a simple endeavor. Drop the player into your world and work together to build up a community. Simple in concept right? Well the developers went in another direction where you just loot stuff in their world for your world. You cannot help your friend, you are not working toward a similar goal, you can only on very very rare occasions even contribute to their supplies.

Daybreak, the Horde mode, could have been a redeeming feature, but instead, it is the same waves in the same area each and every time. No variance in weapon drops, horde density or composition. No options to deploy anything other than fixing walls and unlocks take so long to accomplish you would swear to whatever god you believe in there at one point was a booster pack for this mode to make it go faster.

As for the story mode, in my 24 hours with the game I didn’t touch it, so I cannot comment on whether it is good or not. Though anecdotal my friend told me it is an area filled with plague zombies and he didn’t find it very engaging, so I was leaving it to after I completed the base mode.

That was until the final straw. Attempting to deliver a cure to a settlement my trader settlement was aiming to ally with a Juggernaut spawned and attacked. No problem as typically they are easy to defeat even when plagued when you have another settlement gunning them down. Then the game decided to spawn a third horde from nowhere to descend upon us. With the area right next to my base, with the area repeatedly pacified and safe zones established, a third horde of armored zombies spawned and sent a simple delivery into FUBAR territory.

From the game’s obnoxious representation so bad even my casual friend noticed it, to a slog of half-baked and poorly joined mechanics, State of Decay 2 simply gets in its own way. Every action is one of futility, of meaningless time sink that you do more to pass the moments than you are to accomplish anything. That this game sat in development hell is obvious throughout the experience. Considering the developers want to take the design and make it an MMO going forward when they cannot even manage the basic elements of a 3D Rebuild is laughable.