You can’t even start up a game these days without being slapped in the face with Left-wing propaganda. That’s what happened with Wasteland 3, the upcoming turn-based strategy game from inXile Entertainment. After Microsoft bought out inXile there were some gamers who thought that this meant great things for the company and it would allow them to do more and go further with the development. In reality all it meant was that Microsoft and inXile would synergize their Left-wing beliefs and further irrumate gamers with their sociopolitical beliefs.

Microsoft has gone all-in on the Social Justice bandwagon, and it appears it’s rubbing off on the development studios under their wings, including inXile’s upcoming Wasteland 3.

YouTuber Rob Cram put up a near hour-long video of Wasteland 3’s opening and character creation process, and oh boy is it a doozy.

There’s an opening cinematic narrated by Major Vera Prasad, the leader of the November Ranger Corps, who were supposed to meet with The Patriarch for supplies.

Yes, a woman is somehow leading a convoy of hardened front-line soldiers, something that would never happen in real-life. We’re supposed to suspend our disbelief enough to find ourselves rooting for a middle-aged woman fighting against criminals, bandits, outlaws, and ravagers in a post-apocalyptic world? Seriously?

We saw the same thing in that other upcoming game, Outriders, where they have a strong middle-aged female leader doling out commands to able-bodied soldiers. It’s cringe-worthy and disrespectful.

I’m sure Centrists™ are already conjuring up excuses about how it’s a fictional setting and how a female combat leader is plausible within said fictional world. It’s funny that they always use the “it’s just a game, bro!” excuse when it comes to Left-wing agitprop, yet they always use the “it’s more realistic!” excuse when it comes to removing cleavage, making female characters uglier, or constricting a fictional woman’s chest.

Heck, they’ve recently been championing how toning down Jill’s sex appeal in the Resident Evil 3 Remake with her default outfit was more “realistic”, despite the fact that it’s a game about the walking dead and a trash-bag super zombie hounding down special agent. They conveniently pull out the excuse whenever fan-service or sexy women are brought into the equation, yet they’re quick to use “fantasy!” and “fiction!” as deflections whenever someone questions why a bunch of gays or strong women are running around in a post-apoc game like Wasteland 3.

Anyway, Wasteland 3 doesn’t waste any time in getting right to the propaganda. During the character creation process the default teams you can choose from are horrendous. They hit you right over the head with it by promoting a gay punk-rock couple named Kickboy and Bronco. 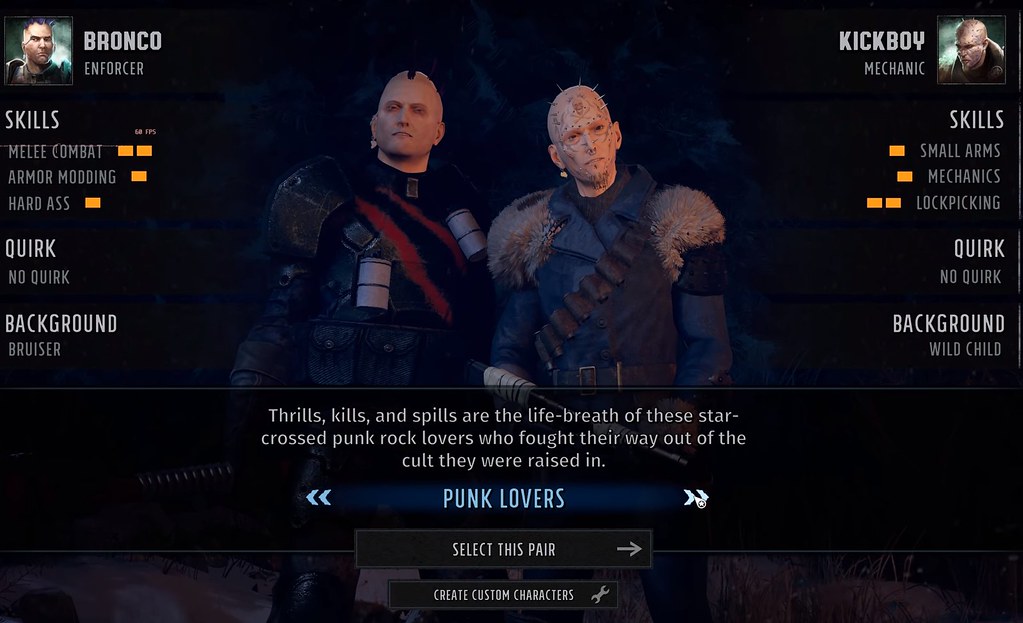 Yes, a gay punk-rock couple… in a post-apocalyptic environment.

They’re also more prone to suicide, mental illness, and drug abuse, even in more socially accepting societies such as the Netherlands, as reported by a now removed report from Catholic Education. The details of the report were even corroborated in a completely separate interview that Dr. Nwokocha had with The Vanguard back in 2012.

And to add further salt into the ideological wound of Leftists, even their darling agitprop outfit The Guardian had to concede that those on the LGBTQIA+ spectrum are frequently more susceptible to mental illness than normal people.

So the likelihood of punk-rockers surviving the apocalypse while continuing to engage in gay sex is paper thin.

If they don’t get killed off and looted for what little supplies they might have, disease would surely take them. However, all of that is skimmed over so that inXile can pepper people with a fantasy that gays would be a normal occurrence in a post apocalyptic scenario, all so that the Cornhole Commissars can rub their hands together aggressively over seeing Kickboy and Bronco engage in their gay adventures.

But it doesn’t end there. There’s also interracial POCkers who happen to be in the STEM field… because of course. 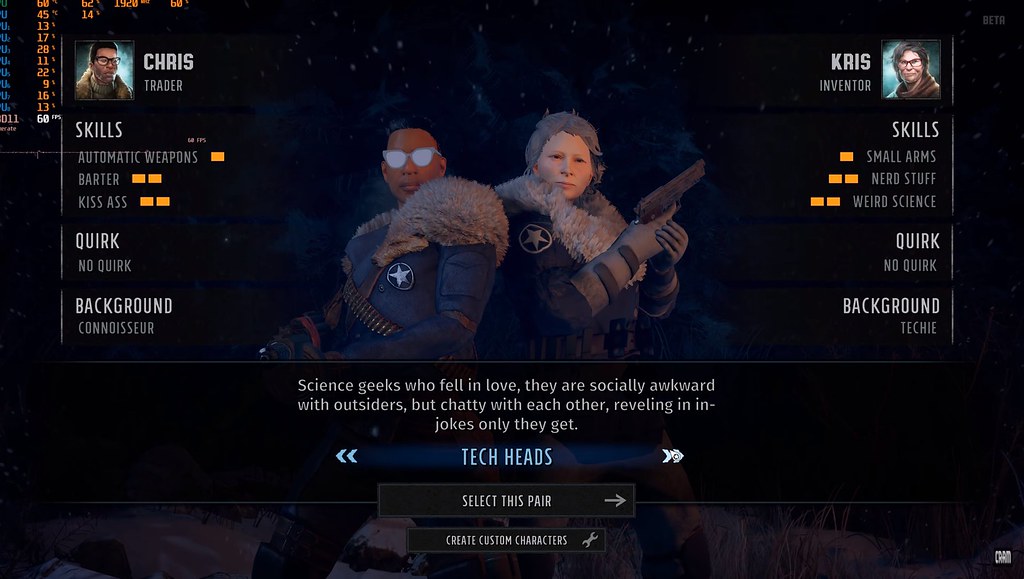 I can’t even tell if Chris is supposed to be a man or woman. Then again, the same could be said for the other Kris who looks like a perturbed man dressed up as a woman. Worse yet is that since the portraits and in-game models for both characters are completely androgynous (but leaning more on the masculine side) – and with people suffering from mental illness where they now believe they’re “non-binary” – I don’t know what either Kris/Chris is supposed to be.

Either way, it’s an interracial couple in the STEM field, and neither of the two happen to be a straight white male for obvious reasons. 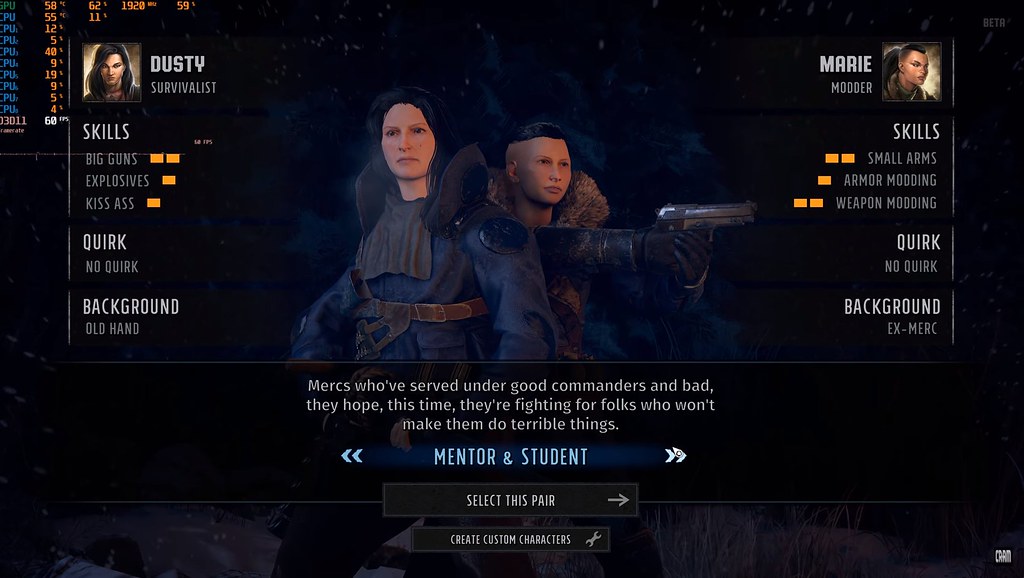 I don’t know if they’re also supposed to be lesbians or not, but the odds are high given the current crop of characters.

There’s literally only one partially normal couple from the default list, and it’s Yuri and Spence, two Rangers who were once rivals before the world went bottles up.

I’m guessing Spence is supposed to be an actual woman, despite having a man’s name. However, having a typical shaved head like a degenerate San Francisco Liberal employs a sense of deliberate pause. 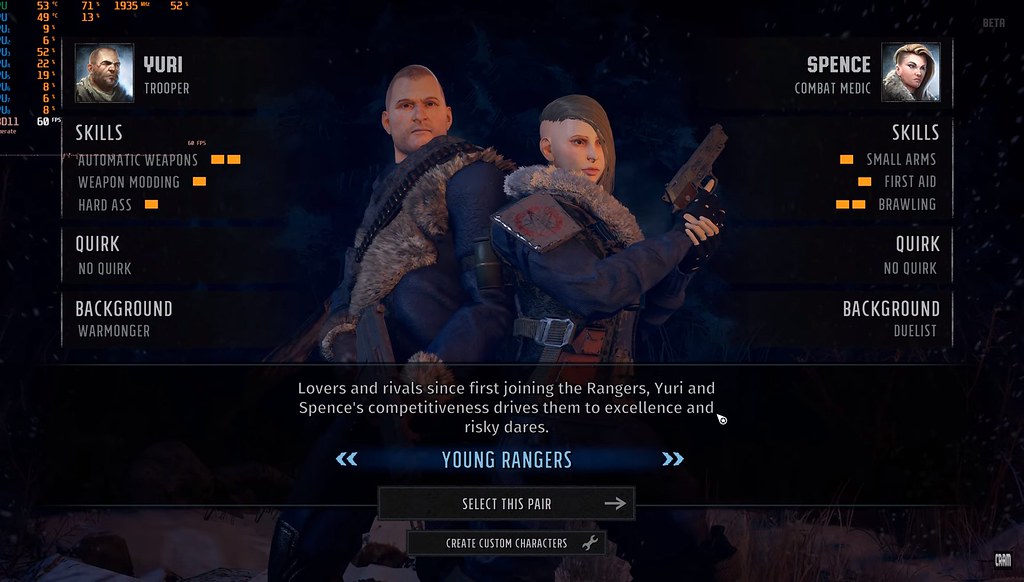 Oh, and I almost forgot about the Asian father and daughter combo.

At least we know that the Asian man is straight since he had a daughter, obviously it would have been too much to ask for a twin samurai brothers, or rival ninjas who joined the corps, or two mercenaries who were friends.

Basically, the theme was that there were no straight, white masculine duos who were competent men. Yet they had no qualms about making a default pairing of female POCkers who were masculine and battle-hardened. The good part is that you can at least create your own duo and you’re not relegated to using the mercenary diversity hires. 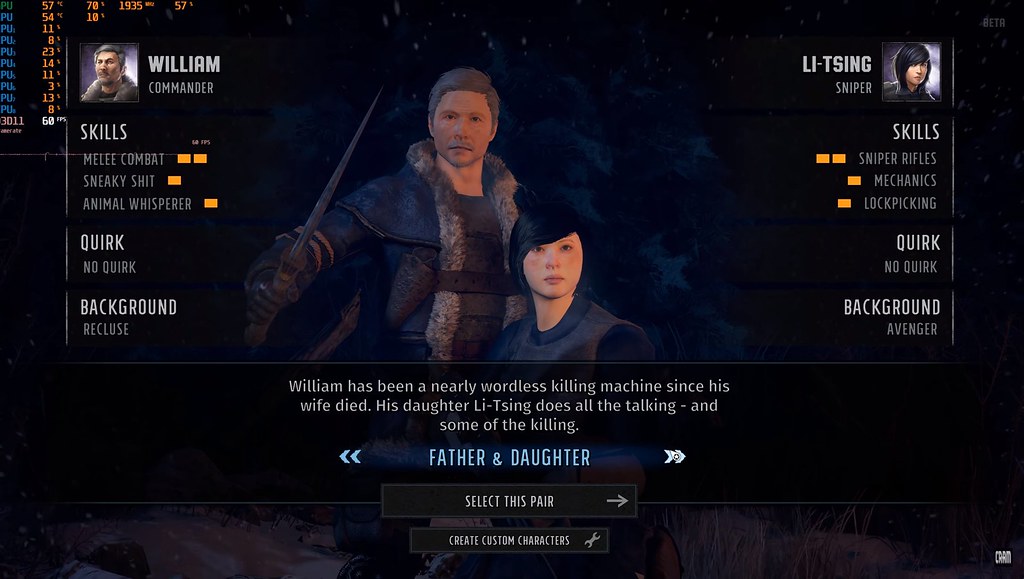 All of the female portraits are completely tanked, too.

They’re all either ugly or making the proverbial “don’t need no man” face.

You probably think I’m joking but I’m not. You can take a look at the portraits for yourself. 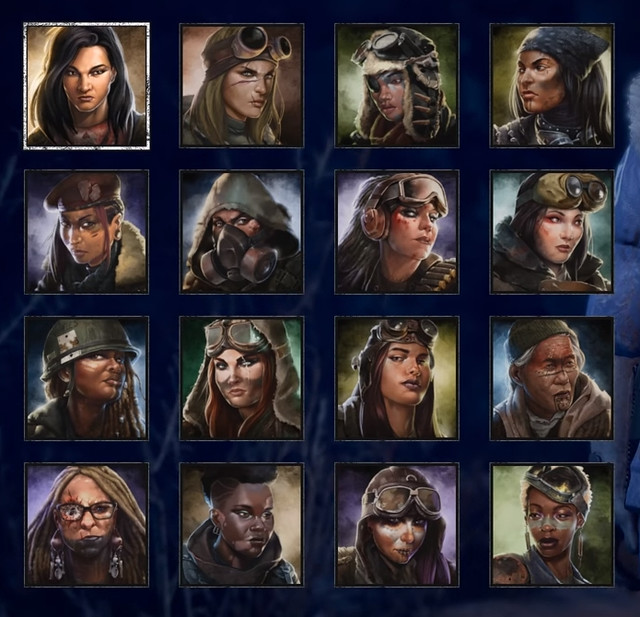 Majority of the portraits are of POCkers, though, so it lets you know where their priorities are.

In the actual game the Dorseys are pretty much like the religious cult from Far Cry 5. Fundamentalist killers… oh and did I happen to mention that they’re hillbillies, too? To top it all off the battle music for the final showdown with the Dorseys during the preview build has some Christian cult music playing, just to hammer home the point for those in doubt. Feel free to watch Cram’s video to hear it for yourself.

This is all just within the first 50 minutes of the game.

At this point I expect the Centrists™ to rally around and support the game and its “diversity” because that’s what they do. They’re Lefties disguised as moderates. Anyone who voices displeasure at the degeneracy will be shouted down and fulminated for their opinion, just until the game releases, various YouTubers start mocking the game’s wokeness, it goes broke, and then Centrists™ will jump in and make it like they were always against the game’s agitprop.

We’ve seen them do it with Mass Effect: Andromeda, Wolfenstein: Youngblood and Mortal Kombat 11. Expect the same thing to happen with Wasteland 3 once it releases.

(Thanks for the news tip JC Denton)