Parents have finally said “Enough is enough!” and called out both Cartoon Network and Nickelodeon for openly promoting degenerate culture on their social media feeds.

On March 31st, 2020 both Cartoon Network and Nickelodeon tweeted out the following.

Today is International #TransDayOfVisibility 💕 We’re celebrating transgender people around the world and the courage it takes to live their truth #TDOV pic.twitter.com/u4gZsThwlB

While there’s the obvious furries, scumbags, and members of the Rainbow Reich floating around the comment section, cheering on for Nickelodeon to promote socially disruptive mental illness to kids, there’s a surprising number of people who aren’t on board.

Thankfully, there were plenty of people calling them out, telling them stop, and to leave the kids alone.

There is no such thing as “their truth.” Truth isn’t relative.

Nickelodeon, you lost me as a viewer now! pic.twitter.com/EGIWHfaUsU

You are a TV network for CHILDREN.
What is wrong with you?

You. Are. A. Childrens. Network.

There were an equal amount of disgusted individuals in the Cartoon Network Twitter thread, too, pointing out that this was not the sort of thing you should be encouraging or impressing upon children.

Most kids have it hard enough just growing up in current day society, but now you have kid shows encouraging adaptive hormonal therapy and life-altering surgery, decisions that will permanently ruin that child’s life, hence why 41% of trans people commit suicide, as detailed in a report by Dr. Williams featured on Science Direct.

What I love about trans ppl is

THE 41% THAT SUCCEED!!!! #TransDayOfVisibility

Well my kids and nieces are never gonna this crap again. pic.twitter.com/zycKnLG6ez

My grandchildren will NEVER watch your channel again! Leave our children ALONE

Thanks for ensuring tomorrow morning my kid won’t be watching your channel ❤️ pic.twitter.com/LqrJTJiXuQ

Imagine someone telling you 20 years ago that in 2020, children’s cartoon networks would be encouraging kids to change their genders through surgery, under the frame of “being yourself”.

You’d be laughed at and kicked out as a lunatic.

By 2040 pedophilia will be legalized if we keep moving in the current direction that Liberal Progressives want, along with their pet Centrists™.

Even still, it takes a certain level of mental instability to think that being born with male genitalia means that you’re a woman in the wrong body.

There are a few people in the thread suffering from physical delusions, so much so that they even posted a photo revealing that they need serious psychiatric help and the best medicine that money can buy. They also need to get off of Twitter, which is encouraging their mental illness, and will inevitably result in them joining the 41%.

Hi @cartoonnetwork
I’m Emma
Nice to meet you. I am 25 years old and not on hormones thanks to the American Health Care System making them expensive, however I am trying to be the best woman I can be! pic.twitter.com/K5VYVZnAMn

For Cartoon Network it adds some context now to why they were so willing to show a lesbian relationship in Adventure Time by turning Princess Bubblegum gay, or why they added an unnecessary lesbian couple in My Little Pony, or why there was a lesbian wedding in Steven Universe.

They’re all about inculcating your kid with LGBTQIA+ propaganda little by little, and then reinforcing that message on social media.

To make matters worse, this adds a whole new stench to when Nickelodeon came under fire for housing what some people felt were sexual miscreants.

If you were out of the loop there’s a small infographic detailing what some people labeled the “Creep Club”. 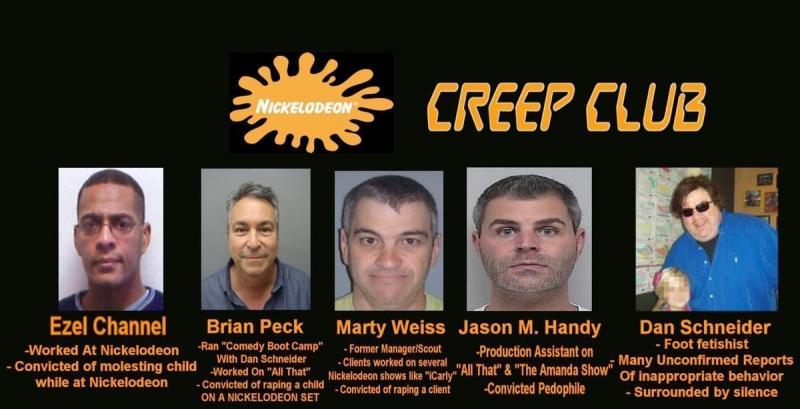 Dan Schneider, one of the creators of many shows that air on Nickelodeon, was even spotlighted in a lengthy YouTube video that was nearly 20 minutes from blameitonjorge, detailing his child foot fetish and some of his disturbing behavior.

Back in late 2017 they also fired Chris Savino, the creator of Loud House, for sexual misconduct during the #MeToo witchhunt.

Having creators with open sexual fetishes hovering around kids material while also promoting a dangerous and mentally unsound lifestyle towards kids should send warning bells ringing off within the heads of every right-thinking parent on the planet.

Unfortunately there are still quite a few people who have been brainwashed by perceptive cultivation into believing that it’s okay to mutilate your child’s body and force your kids on hormone pills to destroy their physiological balance. Some of those people, who regrettably are parents, are in the Twitter thread thanking Cartoon Network and Nickelodeon for promoting degenerate behavior.

It almost feels like we’re at the point of no return. But take heed in the hope that perhaps the majority of normal people out there will push back vociferously against the tainting of today’s children, because once they normalize the glamorization of castration and the defenestration of parental rights so that they can sexualize and victimize your children, Western society will have succumbed to the transmogrification of being a dystopian hell on Earth.