Disney is now retroactively censoring old movies for today’s audiences. If you don’t have the films on VHS, DVD, or Blu-ray, you might want to grab them now because otherwise all future iterations of the film will likely undergo the same sort of censorship process that Disney has undertaken for the movies appearing on Disney Plus. In this case, the 1984 romantic fantasy film Splash starring Tom Hanks and Daryl Hannah has been retroactively censored for its airing on Disney Plus due to some poorly applied digital wizardry.

IGN is reporting that all of the brief scenes featuring Daryl Hannah’s barely visible bum have been smitten by a Casanova named censorship.

There’s a video cliip of the Disney Plus iteration of Splash that was posted up on Twitter by user Allison Pregler. You can check out Disney’s new modified version of the flick below.

Disney+ didn’t want butts on their platform so they edited Splash with digital fur technology pic.twitter.com/df8XE0G9om

As you can see, the edit job is quite terrible. They extended the length of Hannah’s hair down below the crease of her butt cheeks and pasted the bad hair job onto each frame where there’s a shot of her backside.

It looks amateurish and outlandish.

Typically on national TV broadcasts they would just blur out the nudity in the frame, or zoom in on the image to obscure the nudity out of frame. Going out of the way to digitally censor the nudity with replacement imagery seems like a waste of time. In that case, why not just air the TV broadcast version?

For comparison purposes, J, R, F, B, also posted up a clip from the original 1984 version of Splash featuring the movie’s latent nudity. You can check it out below.

As pointed out by IGN, when Splash originally released it was rated PG, and back in the 1980s things were a lot more lax around the MPAA offices. Violence, gore, sex scenes and nudity were frequent in horror, adventure, action, and romance films back then, and Splash was no exception.

The movie these days would likely land a PG-13 rating even though the nudity is fairly tame. 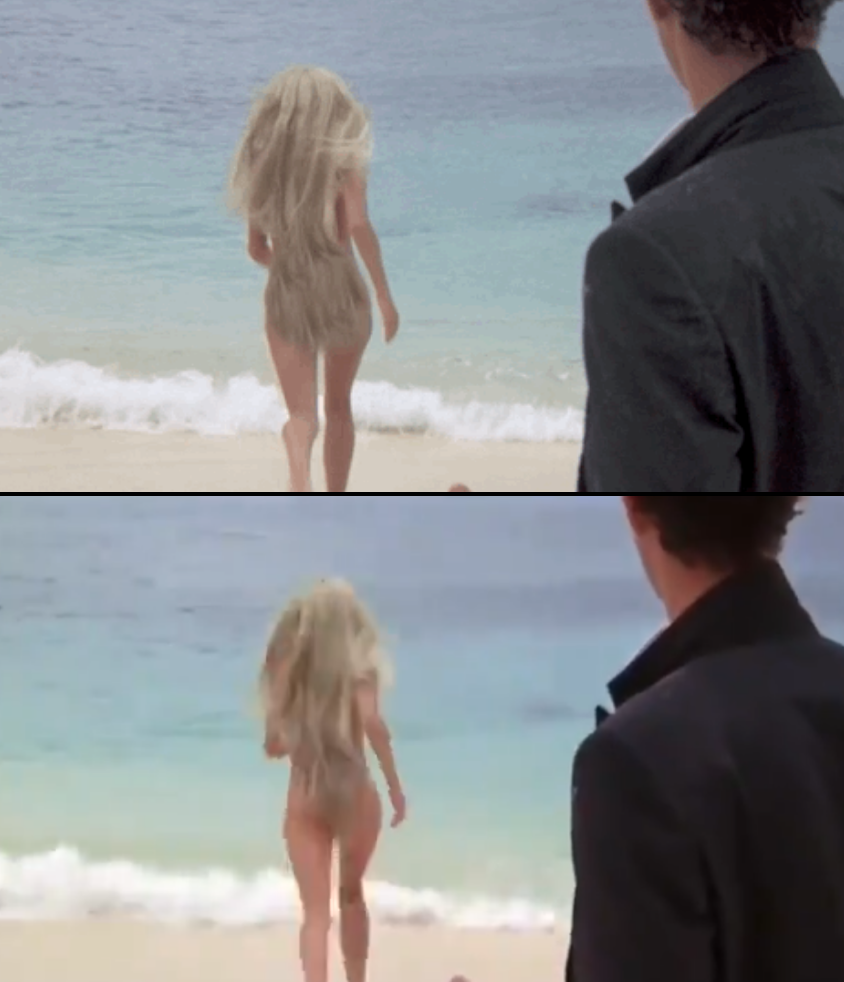 Apparently Disney is of the mind that even though you’re paying for access to movies through their premium streaming service, the films still need to be edited as if they were being broadcast on national television.

It’s like paying for HBO but all the skin flicks have the naughty bits censored.

Anyway, this is notable because Disney has been censoring content for Disney Plus, and it’s likely going to continue. In fact, once the censorship train gets rolling it’s almost impossible to stop. As mentioned at the top of the article, be sure to purchase the original legacy versions of the film because if the re-releases are edited, then the censored versions will end up becoming the standard versions.