Disney continues to pepper children with the gay agenda, this time with Season 3, Episode 1 of the DuckTales reboot, which airs on Disney Plus and Disney XD.

The children’s cartoon introduced Violet’s two gay dads to the show, showing that Disney has no qualms about paving the way for kids to learn about the intricacies of backdoor bufflehead bandits.

The typical propagandists on Twitter are promoting and praising Disney for infecting kids with the idea that it’s okay to be gay.

A step in the right direction for LGBT representation… Thank you so much, #DuckTales pic.twitter.com/0wVPLLm4zP

The show joins other recent Disney properties, such as Beauty and The Beast and Onward, in adding gayness into children’s media in order to normalize the lifestyle.

Centrists™ will be quick to say, “There’s nothing wrong with promoting the gay lifestyle to kids!” or “There is no gay agenda!”, to which they would be wrong on both accounts.

In fact, this was a very blatant agenda that was set in stone by the creators some time ago.

Back in November of 2019, Angones penned a short blog post on Tumblr where he explained…

“Want to be very up front and honest about this: Violet’s dads are present and show up but do not play a huge role in the story thus far. As with all of our characters, we had a lot of conversations about who Violet was and what her background was and came up with this fun notion of her too enthusiastic, overly supportive dads who love being dads. We didn’t really have a story built around them, but when the time came for an episode focusing on Huey and Violet in a particular situation, it made sense that they would be there (and it resulted in Matt Humphreys coming up with one of my favorite Lena lines ever).

“But I’m well aware that the “queer representation through parents and background characters” trope is an issue, and we’ve sort of stumbled backwards into a lot of heteronormative romances in this show due to legacy characters with pre-existing relationships (Scrooge and Goldie, Donald and Daisy, Fenton and Gandra) and how many specific hoops you have to jump through to make changes to established Disney characters (Again, please read my future book). But that’s really no excuse. We’ve done pretty well on racial diversity and representation of people with limb differences, but we really have not done enough relevant LGBTQ+ rep. We do have some themes and ideas coming up that address relevant LGBTQ+ narratives. But there’s always opportunity for a lot more; I don’t want a cop out and a cookie for saying “look at this one thing we did!” I know this response is a bit of a bummer, but I didn’t want to lead anyone on. But please believe, as I’ve said before, I’m dedicated to being better and finding new opportunities for three dimensional representation, on this show and the next and the next.”

There’s no longer any denying that there truly is a gay agenda to inculcate kids with LGBTQIA+ content. 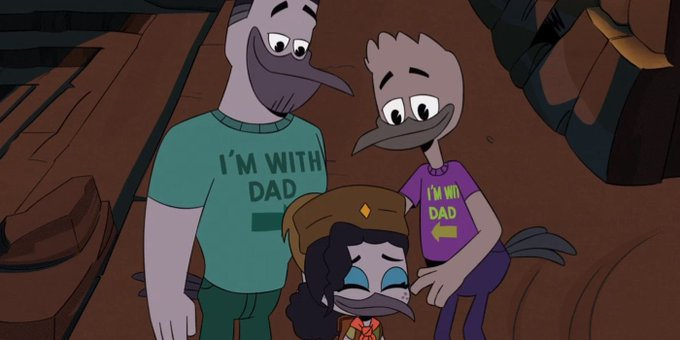 The other argument that it’s “completely normal” is also wrong. It’s not. It’s aberrant.

Gays only make up 1.6% of the population according to Time Magazine, and happen to be one of the tiniest demographics in America.

Yet, nearly every show out there has at least one gay character. They’re overly represented as it is, yet GLAAD has been asking for 20% of all media characters to be gay by 2025.

So not only are gays a miniscule minority being over-represented in media, but their representation isn’t even indicative of reality.

Again, in a gay and bisexual health study by the CDC, they outright admitted…

“[…] In 2014, gay, bisexual, and other men who have sex with men accounted for 83% of primary and secondary syphilis cases where sex of sex partner was known in the United States. […]

So the arguments that the lifestyle is “completely normal” and “completely healthy” are both wrong.

If you want to be gay, be gay. But don’t impress upon the youth in Western society that it’s normal when it’s not; it’s fringe.

If you want to bang dudes, bang dudes. But don’t impose on younglings that gay sex is completely safe, when in fact it carries the highest risk of disease among any sexually active groups.

The promotion of LGBTQIA+ content in kids’ media is practically the same as promoting smoking in cartoons, and telling everyone that it’s safe for you.

At least in the case of Cartoon Network and Nickelodeon promoting transgenderism to kids the parents openly spoke up against it, but we’ll see if they do anything about DuckTales.

A lot of this is leading towards the inevitable promotion of normalizing MAPs. It’s been on the roadmap for a while, but you’re steadily seeing it crop up in children’s media by first normalizing the LGBTQIA+ lifestyle. It’ll only be a matter of time before you start seeing the push for further acceptance, and Centrists™ rallying to defend said acceptance. For now, though, right-thinking people are calling them out.

Nevertheless, given that gays can’t procreate, only socially inseminate, they have to carry on their seed through agitprop designed to indoctrinate people into thinking this is all a-okay. This is because they’re genealogical dead-ends, so they need to employ the tenets cultivation propagation to help normalize the behavior, otherwise their legacy starts in a truck stop bathroom and ends in another man’s rectum.