The uploading service MEGA has banned users and blocked uploads of Koikatsu, Koikatsu Party and AI Shoujo. Some indicated that they received notices saying that it was due to illegal content, others claimed that it was due to illegal sexual content, but the bans have been enacted and it’s likely the start of a purge across the net for mods related to the aforementioned games.

RagingGoldenEagle tweeted out a letter that’s been circulating in the Koikatsu Discord community, informing users that others who upload mods are being banned from the MEGA file sharing service.

I knew that when megaupload was taken down, its replacement would be a hollow shell of its former self. Now we have proof. Use anyone BUT these clowns! pic.twitter.com/hWu9ENY12Q

If you’re unable to read the message from community administrator SmokeOfC, a larger version of the image can be viewed below. 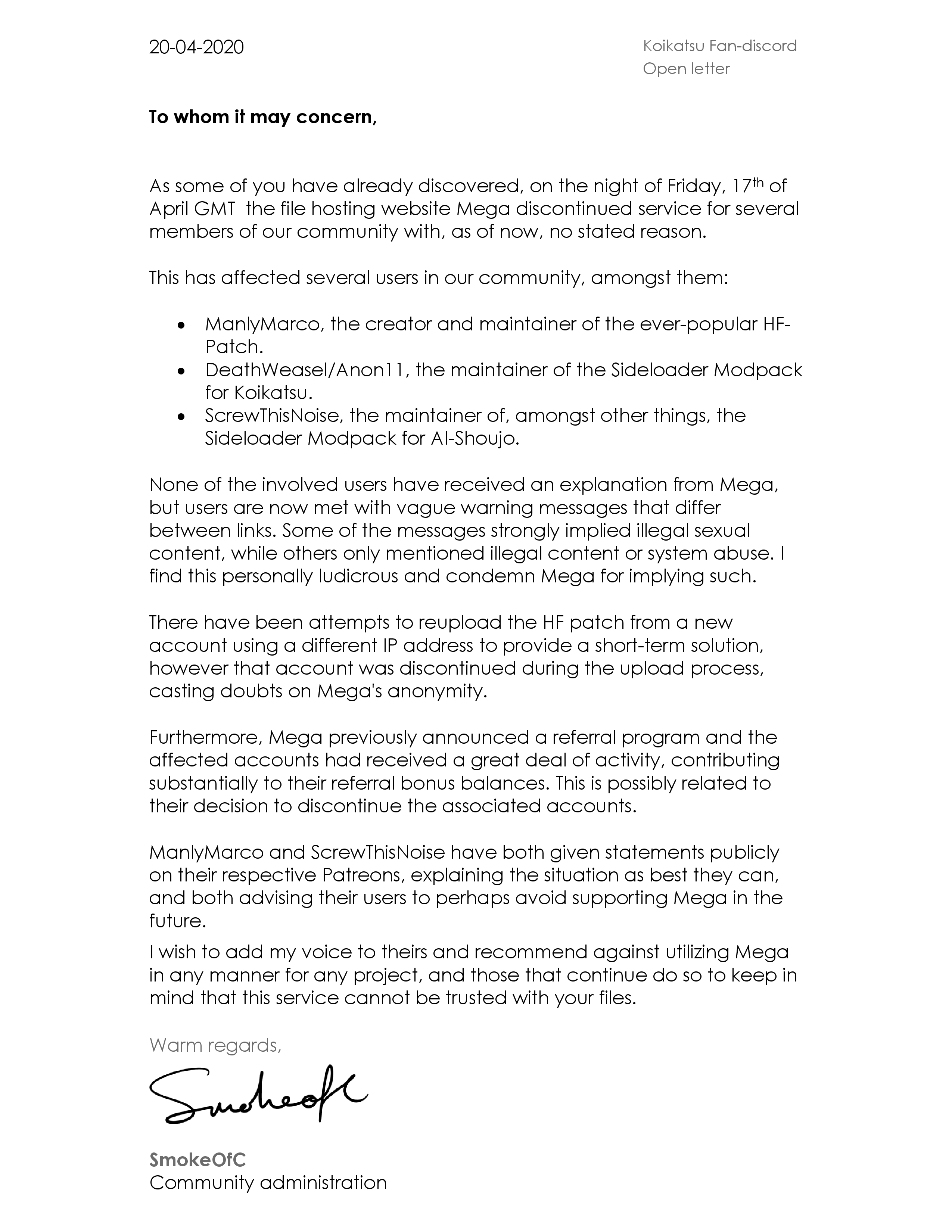 As mentioned in the letter, the users corroborated the bans over on their own Patreon pages. ScrewThisNoise explained in a message posted April 19th, 2020…

“On friday, the PRIMARY mega accounts of myself as well as several modders (amongst them the maker of HF-Patch, ManlyMarco, and the admin of the Koikatsu Sideloader Modpack, DeathWeasel) got taken down. We have all attempted to figure out what’s up, but Mega is not replying to these requests, so we’re looking elsewhere to proceed. I tried setting up a new mega to keep us over till the end of the month, but that failed and got deleted as well. So next up is to accelerate server setups. For this purpose, both Koikatsu and AIS now share one server that were supposed to be backed up with Mega to make sure it doesn’t get overloaded with traffic just for AI Shoujo. This isn’t optimal, as this server would slow to a crawl when either of us releases a new update.

“Let’s also address this: The mega error that comes up when trying to access some of the links were a standard Mega “we deleted this and terminated the account” kinda deal, neither of these megas contained any material of “really bad content” to put it mildly. It further aggravates me that they’re in practice slandering us in this manner!”

This isn’t the first time service has come down on the aforementioned games.

Back in January of 2020 Patreon issued an edict to users that Koikatsu Party mods would no longer be allowed on the platform because they “sexualized minors”.

Shortly after that Koikatsu Party and other visual novel and anime-themed dating sims were also banned in Germany.

If you think this is random, it’s not.

We’ve seen very deliberate methods from Big Tech to come down on anime-style media content, with the United Nations leading the charge against loli and shota content last year, and both Twitter and Reddit followed up with bans of loli content as well. Steam has also been banning a number of anime-themed visual novels and dating sims, too, especially if they’re mostly aimed at straight male audiences.

Patreon has also been cracking down on artists who draw “Japanese style” female characters. 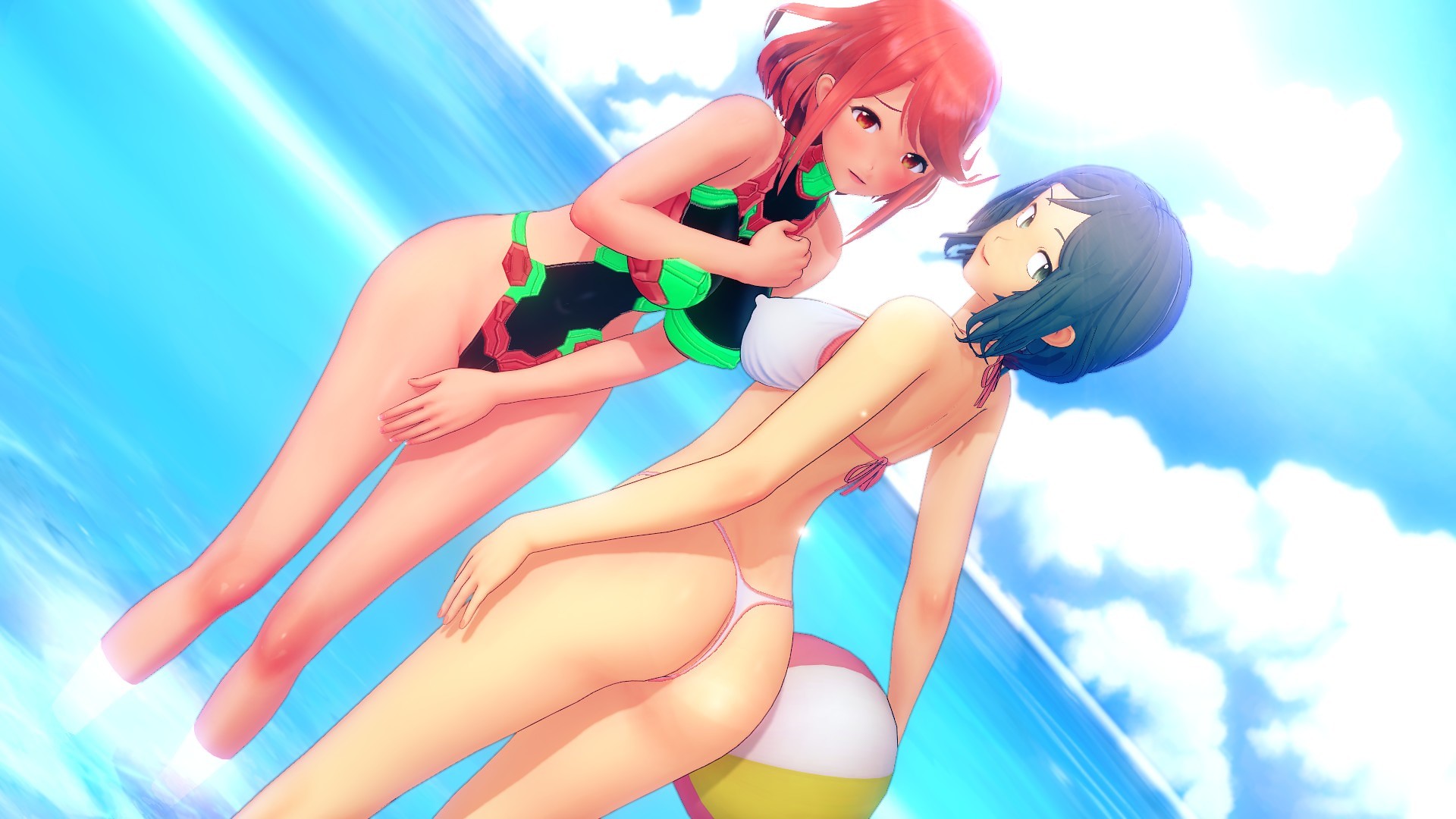 A lot of this censorship is deliberate, but sadly you’ll be inundated with deflections and equivocation from Centrists™ claiming that there’s some “mistake” or “they probably didn’t mean it”. As the old saying goes: Once is happenstance, twice is deliberate, three times is a pattern.

Heck, there’s even rumors that DeviantArt will purge NSFW content at the end of the year.

Surprisingly, though, the all-ages version of Koikatsu Party is still available on the Steam store for $59.99.

As for MEGA, right now there only reports that they’re going after certain users and content, but we all know how censorship starts. It’s a few coals in the fire that people claim won’t be missed, but pretty soon there’s an entire train chucking along the railway of tyranny at the speed of your rights being incrementally infringed upon.

(Thanks for the news tip sol badguy and Ebicentre)